Are the Rest of Us to Be Mere Bystanders? 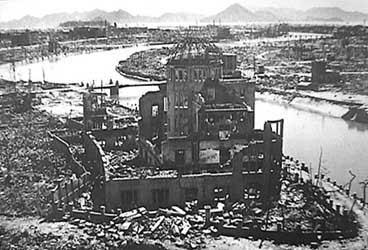 On the anniversary of the dropping of the atomic bomb on Hiroshima on August 6, 1945, John Pilger describes the ‘progression of lies’ from the dust of that detonated city, to the wars of today – and the threatened attack on Iran.

06/08/08 “ICH” — – When I first went to Hiroshima in 1967, the shadow on the steps was still there. It was an almost perfect impression of a human being at ease: legs splayed, back bent, one hand by her side as she sat waiting for a bank to open. At a quarter past eight on the morning of August 6, 1945, she and her silhouette were burned into the granite. I stared at the shadow for an hour or more, then walked down to the river and met a man called Yukio, whose chest was still etched with the pattern of the shirt he was wearing when the atomic bomb was dropped.

He and his family still lived in a shack thrown up in the dust of an atomic desert. He described a huge flash over the city, “a bluish light, something like an electrical short”, after which wind blew like a tornado and black rain fell. “I was thrown on the ground and noticed only the stalks of my flowers were left. Everything was still and quiet, and when I got up, there were people naked, not saying anything. Some of them had no skin or hair. I was certain I was dead.” Nine years later, when I returned to look for him, he was dead from leukaemia. 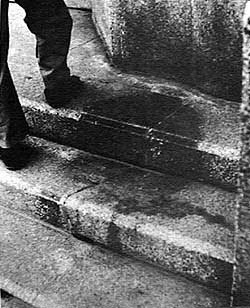 A shadow on steps such as Pilger describes above

In the immediate aftermath of the bomb, the allied occupation authorities banned all mention of radiation poisoning and insisted that people had been killed or injured only by the bomb’s blast. It was the first big lie. “No radioactivity in Hiroshima ruin” said the front page of the New York Times, a classic of disinformation and journalistic abdication, which the Australian reporter Wilfred Burchett put right with his scoop of the century. “I write this as a warning to the world,” reported Burchett in the Daily Express, having reached Hiroshima after a perilous journey, the first correspondent to dare. He described hospital wards filled with people with no visible injuries but who were dying from what he called “an atomic plague”. For telling this truth, his press accreditation was withdrawn, he was pilloried and smeared – and vindicated.

The day after Hiroshima was obliterated, President Truman voiced his satisfaction with the “overwhelming success” of “the experiment”.

The atomic bombing of Hiroshima and Nagasaki was a criminal act on an epic scale. It was premeditated mass murder that unleashed a weapon of intrinsic criminality. For this reason its apologists have sought refuge in the mythology of the ultimate “good war”, whose “ethical bath”, as Richard Drayton called it, has allowed the west not only to expiate its bloody imperial past but to promote 60 years of rapacious war, always beneath the shadow of The Bomb.

The most enduring lie is that the atomic bomb was dropped to end the war in the Pacific and save lives. “Even without the atomic bombing attacks,” concluded the United States Strategic Bombing Survey of 1946, “air supremacy over Japan could have exerted sufficient pressure to bring about unconditional surrender and obviate the need for invasion. Based on a detailed investigation of all the facts, and supported by the testimony of the surviving Japanese leaders involved, it is the Survey’s opinion that … Japan would have surrendered even if the atomic bombs had not been dropped, even if Russia had not entered the war and even if no invasion had been planned or contemplated.”

The National Archives in Washington contain US government documents that chart Japanese peace overtures as early as 1943. None was pursued. A cable sent on May 5, 1945 by the German ambassador in Tokyo and intercepted by the US dispels any doubt that the Japanese were desperate to sue for peace, including “capitulation even if the terms were hard”. Instead, the US secretary of war, Henry Stimson, told President Truman he was “fearful” that the US air force would have Japan so “bombed out” that the new weapon would not be able “to show its strength”. He later admitted that “no effort was made, and none was seriously considered, to achieve surrender merely in order not to have to use the bomb”. His foreign policy colleagues were eager “to browbeat the Russians with the bomb held rather ostentatiously on our hip”. General Leslie Groves, director of the Manhattan Project that made the bomb, testified: “There was never any illusion on my part that Russia was our enemy, and that the project was conducted on that basis.” The day after Hiroshima was obliterated, President Truman voiced his satisfaction with the “overwhelming success” of “the experiment”.

Since 1945, the United States is believed to have been on the brink of using nuclear weapons at least three times. In waging their bogus “war on terror”, the present governments in Washington and London have declared they are prepared to make “pre-emptive” nuclear strikes against non-nuclear states. With each stroke toward the midnight of a nuclear Armageddon, the lies of justification grow more outrageous. Iran is the current “threat”. But Iran has no nuclear weapons and the disinformation that it is planning a nuclear arsenal comes largely from a discredited CIA-sponsored Iranian opposition group, the MEK – just as the lies about Saddam Hussein’s weapons of mass destruction originated with the Iraqi National Congress, set up by Washington.

The role of western journalism in erecting this straw man is critical. That America’s Defence Intelligence Estimate says “with high confidence” that Iran gave up its nuclear weapons programme in 2003 has been consigned to the memory hole. That Iran’s president Mahmoud Ahmadinejad never threatened to “wipe Israel off the map” is of no interest. But such has been the mantra of this media “fact” that in his recent, obsequious performance before the Israeli parliament, Gordon Brown alluded to it as he threatened Iran, yet again.

This progression of lies has brought us to one of the most dangerous nuclear crises since 1945, because the real threat remains almost unmentionable in western establishment circles and therefore in the media. There is only one rampant nuclear power in the Middle East and that is Israel. The heroic Mordechai Vanunu tried to warn the world in 1986 when he smuggled out evidence that Israel was building as many as 200 nuclear warheads. In defiance of UN resolutions, Israel is today clearly itching to attack Iran, fearful that a new American administration might, just might, conduct genuine negotiations with a nation the west has defiled since Britain and America overthrew Iranian democracy in 1953.

In the New York Times on July 18, the Israeli historian Benny Morris, once considered a liberal and now a consultant to his country’s political and military establishment, threatened “an Iran turned into a nuclear wasteland”. This would be mass murder. For a Jew, the irony cries out.

The question begs: are the rest of us to be mere bystanders, claiming, as good Germans did, that “we did not know”? Do we hide ever more behind what Richard Falk has called “a self-righteous, one-way, legal/moral screen [with] positive images of western values and innocence portrayed as threatened, validating a campaign of unrestricted violence”? Catching war criminals is fashionable again. Radovan Karadzic stands in the dock, but Sharon and Olmert, Bush and Blair do not. Why not? The memory of Hiroshima requires an answer.