How, exactly, would the Big Apple rot if nobody picked up the trash?

Within a couple of weeks the city would be carpeted with trash — more than 120,000 tons of it, according to Robin Nagle, the Sanitation Department’s “anthropologist in residence.” (It’s an unsalaried job that she talked the department into creating.) Rats would be rampant and bolder than ever. There’d be typhoid and dysentery. It’d get violent — the rich would hire private garbage haulers, plus armed guards to keep the riffraff from dumping in wealthy neighborhoods.

The stink would be unimaginable. The tourist trade would crash, probably wrecking the economy.

“At that point,” Nagle says, “we could just push New York City into the river.” 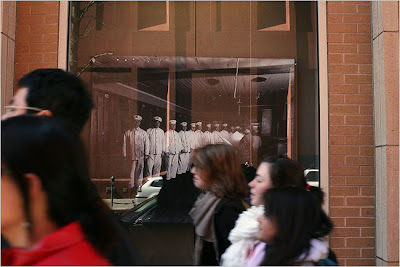 There is nothing more disgusting than garbage that doesn’t know its place. That’s one reason it’s garbage in the first place. It is something we are done with, that no longer belongs near us. It must be removed, taken away. Otherwise it contaminates, disgusts. The anthropologist Mary Douglas suggested that the very definition of dirt was “matter out of place”: a hair on one’s head is one thing, a hair in a glass of water is another. A half-eaten plate of food is a savored delicacy in one context, a mound of waste in another.

So it shouldn’t be any surprise that there is a Nimby reaction to garbage dumps. Of course they shouldn’t be in my backyard. That would be the very essence of pollution: breaking down the boundary between refuse and refuge.

Maybe there’s also something profound to be discerned in how we look at garbage. If a fortune-teller can read the future in soggy tea leaves, what might be discovered if we look carefully at milk cartons and used paper towels, cooking grease and moldy bread? There is much to understand about garbage, and a reluctance, because of its very nature, to look too closely.

In folklore, for example, the rag picker and dust sweeper are often possessed of an intimate understanding of people, an insight that eludes those of us who turn away from such matters. There is also a strong element of economic class in the way garbage is regarded. The shantytowns of the world’s poor are constructed out of the discarded flotsam of urban life, but one privilege of the wealthy is to be separated from garbage quickly and decisively.

Garbage that doesn’t seem to know its place may also be suggestive. It is, at least, in a modest series of display windows at New York University, at the corner of West Third Street and La Guardia Place in Greenwich Village in New York City. The windows are a result of a collaboration between the university and the New York City Sanitation Department and were previously shown at the department’s quaintly named Derelict Vehicles Office, where abandoned cars and wrecks enter Purgatory.

The windows, at the Kimmel Center for University Life, describe themselves as “the first step toward founding a museum for the Department of Sanitation,” for this is an agency that, unlike its brethren the New York City Police and Fire Departments and the Transportation Authority, does not have its own museum. The exhibit grew out of a course given last fall, “Making a Museum,” that had the unfortunate subtitle “Materializing Regimes of Value With the New York City Department of Sanitation.”

“What is the cognitive, practical, and cultural role of garbage in contemporary life?” the syllabus asks. Unfortunately the use of jargon (“regimes of value”) inspires some wonder about whether that role has also affected rhetoric. But judging from the curriculum, the class, taught by Haidy Geismar, a professor in N.Y.U.’s museum studies program, and Robin Nagle, an anthropologist, was meant to explore concretely how an exhibition about this often overlooked subject might be approached.

The impetus came from Ms. Nagle, who has long been fascinated by the Sanitation Department, went through job training there, wrote a diary about her experience for Slate in 2004 and is completing a book about the agency. That intimate connection probably helped in putting together this modest show’s most intriguing textual panel, a glossary of the Sanitation Department: Air mail is defined as “garbage thrown at the truck from windows above.” Blood money is “overtime for working snow once the novelty has worn off.” Tissue is “a desk job, an easy job.”

The displays themselves are both celebratory and restrained. In one window a panel about recycling, with the heading “Trash and Transformation,” is mounted above a pile of dry, nonorganic trash, ranging from old LPs to a pink flamingo — examples of what is defined here as mongo: “objects plucked/rescued from the trash.” Another pays tribute to the Fresh Kills landfill on Staten Island, which was about to close just before 9/11 and was then quickly put to use in the processing of the ruins and debris.

There are also historical photos of sanitation men posing in pristine uniforms in the early 20th century. They were given the angelic name of White Wings, though the era’s streets, full of refuse, human waste, and horse manure, made it unlikely they would end the working day in as crisp a fashion. There are also mentions of the job’s dangers: a sanitation worker in 1996 died almost instantly when an illegally dumped drum of hydrofluoric acid was crushed by the truck’s mechanism, spraying him with the corrosive chemical.

One of Ms. Nagle’s main concerns is the invisibility of “san men” as they are called, the ways in which people look past them, almost straining to ignore their work. But that is not too surprising given that garbage is something that is meant to be exorcised, “taken out” or incinerated. One traditional measure of luxury is how little it is possible to come into personal contact with garbage or its removal.

A museum about how New York, and by implication all modern cities, deals with garbage, might actually redeem its subject matter, not earning it much affection perhaps but revealing its hidden influences and powers.

But there is also much to understand about the odd place garbage now holds in middle-class life.

At least in part the impulse to redeem garbage and its handlers is found not only in these windows. Spurred by environmental concerns, attitudes have been shifting.

Instead of wanting to excommunicate our trash, we often treat it as if it were not refuse at all.

We classify our waste, create different containers for it and carefully label it, the way we would collections of cherished objects. We are even instructed to rinse some garbage.

It is as if we were fetishistically preparing dead matter for resurrection or afterlife. That is, of course, the idea, and there are many reasons reclamation might be a practical goal. But a devout attitude attaches to the rituals, a feeling of virtue that seems to transcend considerations of cost.

Recycling is still far more expensive than alternatives, not even counting the time and resources devoted to it in every household.

The rituals are also rigorous. In New York punishments are meted out even if the wrong kind of plastic bag is used for garbage inside sealed, labeled recycling containers.

Put aside discussions of resources and cost; think of what a change this is in attitude. We have redeemed the untouchable, atoned for past wrongs, embraced the forbidden, made democratic the contact with waste. We must now all embrace our inner garbage.

“Loaded Out: Making a Museum” is on display 24 hours a day through May 5 in the windows of New York University’s Kimmel Center, corner of La Guardia Place and West Third Street, Greenwich Village. 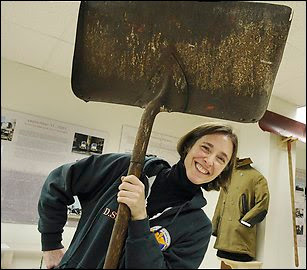 Nagle spent more than a year working with New York sanitation teams, sometimes hauling bags, sometimes driving garbage trucks. She ended up with a huge amount of material for a forthcoming book, “Picking Up,” and a somewhat smaller collection of what is known as “mongo.” It’s a sanitation crew term for something plucked out of the trash for reuse.

Technically it’s prohibited, but apparently it will get you in trouble only if a supervisor has it out for you and can’t nail you for something else. Otherwise, nobody seems to mind.

“I would guess that about half of the guys mongo,” Nagle says.

A mongo sampler is part of “Loaded Out,” including luggage, an electric fan, gloves, a framed photo of an old car, a vinyl record of a Donna Summer and Barbra Streisand duet. Typically, stuff like this gets repurposed in a variety of ways.

“Some sanitation workers eBay their mongo, or they sell it in a yard sale,” Nagle says. “One guy gave it to his church. Another guy found this really beautiful white cashmere scarf and he took it to the dry cleaner and gave it to his wife on Christmas. I don’t know if he ever told her it was mongo.”

This entry was posted in RagBlog and tagged Arts, Environment. Bookmark the permalink.