But today’s topic in the post-election prolonging of Bush ideology is the attempt to reinforce and extend the primacy of the “global war on terror“ (GWOT in Bush-speak) as the federal government’s mission.

To that end, the Department of Homeland Security recently issued Federal Continuity Directive 1. This 87-page document, arriving more than seven [sic – should be six] years after 9/11, is the distillation of the best strategic thinking and guidance of the Administration’s senior leadership on carrying out what Secretary Chertoff calls “the most critical functions necessary to lead and sustain the Nation during a catastrophic emergency.”

Let’s see how far DHS has progressed since the days of Tom Ridge and duct tape.

Right off the bat the gripping title — Federal Continuity Directive 1 — tells us that this is a document of critical importance for the safety of our country. The impressive cover page with the stylized fightin’ eagle carries the same message: 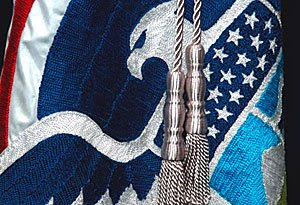 Now we’ll look inside FCD1 to sample its wisdom. It’s hard to select, because almost any page is rich with unintentional self-parody, but let’s start with some basics…

First, the directive answers a question many Americans have been asking for years: What is the purpose of the Department of Homeland Security? Gathering intelligence about threats? Preparing for emergencies? Protecting citizens? All wrong answers. The correct answer is on Page 7:

Maintaining and revising as necessary the various agency PMEFs and MEFs in order to meet requirements for continuity, including ECG, COG, and COOP.

For those of us charged with preparing federal agencies for emergencies, FCD1 provides some deep and insightful thinking on what to do in its “Program Management” guidance. Afraid that its wisdom might prove too knotty and perplexing for the average bureaucrat, DHS provides a helpful graphic summary of our responsibilities: 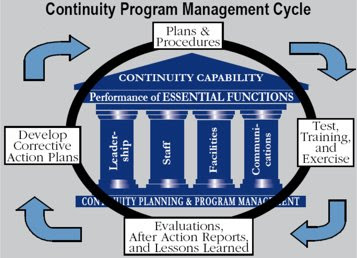 And for those who failed rebuses as children, the text informs us that Leadership, Staff, Facilities, and Communications are the “four pillars” of our program.

OK, then, now that we have learned how to manage the program, what is the program? Again, a handy graphic summarizes: 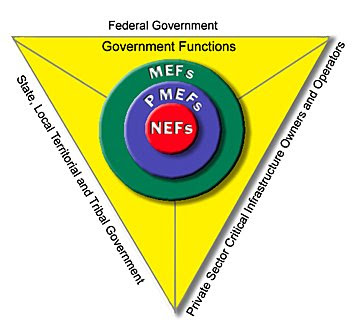 See how simple and colorful protecting our country is! Stack the three circles on top of the yellow triangle, just like in Montessori school. What are NEFs, PMEFs and MEFs? That’s the heart of the document, but you’ll have to find out yourself from the complete FCD1.

As I hope this brief selection has shown, FCD1 is not about protecting citizens or preparing for emergencies. It’s sad and scary to realize that it’s not a parody, but the best thinking and main work product of the Bush appointees charged with keeping the country safe.

What is the real purpose of this compendium of vacuous bloviation, consultant babble, and bureaucratic neo-acronyms?

First, to extend and strengthen the reign of the Bush Terror Presidency within the federal government. FCD1 has a companion volume (with the unsurprising title of FCD2) of mandatory terror-related busywork for bureaucrats.

This ensures that we will spend months filling out forms, preparing reports, conducting training, and running exercises to document our preparedness for a terrorist attack. The message to the federal bureaucracy is the same as the BushCo message to the public: pretending to fight terror is what this country is about.

If you work for the government, your mission is not health care, or environmental protection, or job creation, or safety. Your job is to pencilwhip terrorists with your program plan and your four pillars.

The second objective is the same as for almost any Bush initiative: Siphon off federal money to favored contractors. The Bush White House will enforce compliance with these directives, and former Homeland Security officials are lining up to develop the plans and manage agencies’ security programs. If that means your agency will have less money for its real mission, don’t worry because your mission is not important.

If the Bush plan works, and the primacy of terror management can be embedded deep within the government, we bureaucrats will continue to fight the phony Global War on Terror long after the Bushies have vacated 1600 Pennsylvania Avenue.

So watch out jihadis, and fear my newly sharpened pencil.