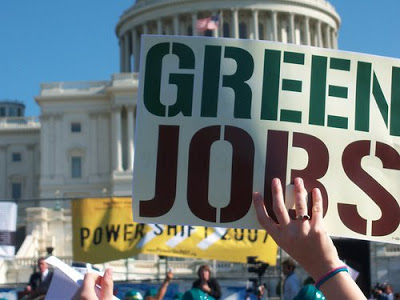 The debate has centered on two competing principles: the desire to spend money on what President-elect Barack Obama calls “shovel-ready projects,” such as highway and bridge construction, vs. spending on more environmentally conscious projects, such as grids for wind and solar power.

In one of the first internal struggles of the incoming Obama administration, environmentalists and smart-growth advocates are trying to shift the priorities of the economic stimulus plan that will be introduced in Congress next month away from allocating tens of billions of dollars to highways, bridges and other traditional infrastructure spending to more projects that create “green-collar” jobs.

The debate has centered on two competing principles in the evolving plan: the desire to spend money on what President-elect Barack Obama calls “shovel-ready projects,” such as highway and bridge construction, vs. spending on more environmentally conscious projects, such as grids for wind and solar power.

Lawmakers opposed to the emerging-technology projects accuse their colleagues of using the financial crisis to push through pricey policy proposals that they say would do little to boost the economy in the immediate future.

“If we’re going to call it a stimulus package, it has to be stimulating and has to be stimulating now. I think there are members of our caucus who are trying to create a Christmas tree out of this,” said Rep. Baron P. Hill (Ind.), incoming co-chairman of the Blue Dog Coalition, a caucus of 51 fiscally conservative House Democrats.

The largest beneficiary of the shovel-ready construction projects would be labor unions. There are fewer of the green-collar jobs, a key focus of House Speaker Nancy Pelosi (D-Calif.). These projects often have the long-term potential to revolutionize the economy but tend to lack the short-term bounce of old-fashioned infrastructure work. Not as many of them involve union labor.

Labor leaders have refrained from criticizing other stakeholders in the infrastructure debate, saying that the stimulus legislation will provide plenty of money to fund quick-starting pavement projects and environmentally friendly efforts. “It shouldn’t be one or the other,” said Anna Burger, chairman of Change to Win, a union group. “In fact, we do have crumbling roads and bridges that need to be repaired. It’s not about pitting one against the other. It’s about how we find a sustainable economy.”

They also see opportunities for their membership in long-term “green” projects. “We’re committed to green jobs and rapid transit and all the rest of it,” said Terence M. O’Sullivan, head of the Laborers’ International Union of North America.

Senior aides in the new administration and the congressional leadership privately predict that they will be able to please both camps but suggest that there have been delays in identifying enough of the environmentally friendly projects to reach a dollar level that will truly jump-start the economy.

Talks over the stimulus plan, which could cost $675 billion to $850 billion, heated up over the past week as an unofficial outline emerged of what the bill would fund. About $200 billion would probably go toward middle-class tax cuts and tax credits for tuition and small businesses, while another $200 billion is under consideration to help mitigate the soaring costs of Medicaid and education. Up to $350 billion, or more, could go toward investments covering infrastructure, tax credits for renewable energy, increased funding for food stamps and the creation of an extensive technological health database.

Democratic negotiators plan to reconvene around New Year’s Day to try to hash out the final details of the plan before the 111th Congress starts Jan. 6, with a goal of passing a bill out of the House and Senate shortly after Obama is sworn in Jan. 20. At a meeting of Obama’s transition team yesterday, Vice President-elect Joseph R. Biden Jr. vowed that the proposal would not become a “Christmas tree” for lawmakers’ policy earmarks. He defended it against the criticism on the left that too much of its focus would be on old-fashioned projects.

“We’ve let our infrastructure crumble for a long, long time from water to roads to bridges. It makes sense to invest in them now,” Biden said.

But environmentalists and their allies view old-fashioned highway construction as encouraging longer commutes and increasing the energy-consumption crisis of the past year. “They’re going to put a bunch of money through a broken system to stimulate the economy. That doesn’t make sense to me,” said Colin Peppard, a transportation expert for Friends of the Earth.

Rep. James L. Oberstar (D-Minn.), chairman of the House Transportation and Infrastructure Committee, has circulated a 41-page memo seeking $85 billion worth of projects over the next two years. The largest chunk of that money, more than $30.2 billion, would go toward highway funds, while $12 billion would go to local public transportation funds. An additional $14.3 billion would go toward “environmental infrastructure,” with most going to a clean-water fund.

The emerging proposal has become such a magnet for lawmakers that more than 50 staffers crammed into a standing-room-only meeting last Friday night in the basement of the Capitol to hear senior aides lay out the parameters of the infrastructure package. Aides described it as a meeting to both pitch the proposal and to solicit ideas for inclusion in the package, particularly for the harder-to-find environmentally friendly projects.

Smart-growth advocates are happy that the percentage of funds in Oberstar’s proposal devoted to roads is not the 80-20 split in the current highway funding formula, but they still see a system tilting toward old-fashioned projects. “It’s been a lot of business as usual,” said David Goldberg, spokesman for Transportation for America.

Goldberg’s group has studied infrastructure proposals from 15 states and found that 75 percent of their requests are for roadway construction, and of that, the overwhelming majority of money would fund new projects in outer suburbs that have been hard hit by the mortgage crisis. “We’re building all this stuff for where the economy isn’t anymore,” he said.

But the green-collar proposals have also come under fire. Hill, the incoming Blue Dog co-chairman, said he opposes including these proposals and the medical technology project in the stimulus plan, suggesting that “somewhere down the road” they be considered under the normal legislative process.

Sen. Ben Nelson (D-Neb.), who supports both medical technology and wind farm projects, said it may take longer to pump the money into those projects, but said that is why Obama set out a two-year plan. In that time span, Nelson said, a “smart grid” could be funded that would connect wind farms and solar-power hot spots around the country, delivering power in a cleaner fashion.

Bill Samuel, the chief lobbyist for the AFL-CIO, said that many of his members could be put to work building or repairing schools or expanding rail systems. “We support all of that,” he said. “There has to be some balance. I think it’s not fair to say we’re all about roads.”