Trump may imagine himself as president, but what he can’t imagine is the perception of himself as a loser. 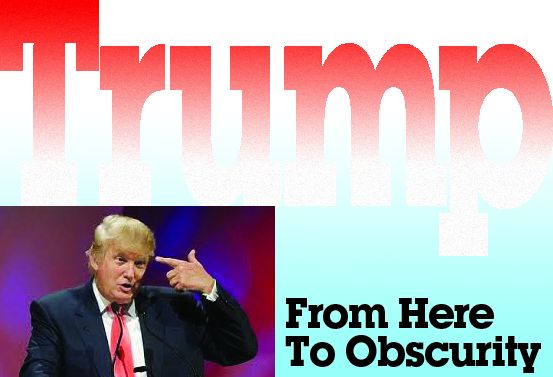 Here’s a first: the entire U.S. media, from the most marginal blogger to the giant TV titans, is united on a single proposition: Donald J. Trump is a man of his word.

Trump says he’s running for president. Which means, according to these clear-eyed commentators, that’s exactly what he’s doing.

“I’ll spend whatever it takes to win,” he has declared.

You’re reading it here first­ — and probably nowhere else — (until it actually happens):

Trump is not running for president and he will not in fact win a single caucus or primary contest in Iowa or New Hampshire or anywhere else.

Of course, I write this at a very unlikely moment­ — when Trump has “surged” to his highest poll numbers, placing him at the head of a crowded field.

What’s more, it is widely assumed that his appeal will only increase following the first televised Fox News debate, where only 10 candidates will be allowed on the stage, thus both marginalizing the rest of the field and producing a far less competitive environment for the remaining contenders.

So why is Trump actually headed for
political obscurity?

So why is Trump actually headed for political obscurity?

First, Trump’s pitch, beginning with his extreme immigration comments, has been almost exclusively to the farthest fringe of his party. That segment has traditionally been seen as comprising only 15 to 20 percent of the GOP base, roughly the same percentage of party voters Trump attracts in the polls. My guess is that this is Trump’s ceiling of support, not his floor. So he has nowhere to go but down.

And that has only become clearer in recent days with his wildly personal attacks beginning with, of all people, Senator John McCain. The most recent GOP presidential nominee, according to Trump, is only a war hero because he was captured in Vietnam. Real American heroes, he then made clear, are those who weren’t captured.

Like Trump himself, for example. And how did he do that? According to Andy Borowitz’s brilliant takedown in The New Yorker magazine: “The Cong were after me,” he quotes Trump satirically, “but then, just in the nick of time, I got my deferment.”

But McCain was just the first of Trump’s targets. For example, Senator Lindsey Graham: “A total lightweight. In the private sector, he couldn’t get a job,” according to Trump. Rick Perry: “He should have an IQ test before getting on the debate stage.” Jeb Bush: “Who would you rather have negotiating with China. Me or Jeb?” And so on.

Add to this his personal history, which will become an increasing focus as the campaign intensifies.

It was only a few years ago that Trump was the most vocal proponent of the anti-Obama birther debacle. How did that go? In the last decade he was a Democrat before embracing the GOP for the second time. Where will he go next? He has been pro-choice on abortion, married three times, and in bankruptcy more than once, to name only a few of his inconvenient “lapses.”

Yet beyond all this, Trump has one fatal flaw that trumps (sorry, couldn’t resist) all others. As strongly as he might imagine himself as president, what he can’t imagine is the perception of himself as a loser, which he will be if he fails in this quest. But the fact is, in this arena he will be a loser. Everyone knows that and he knows everyone knows that. And it is this collective perception that will require him to depart the race.

Finding a credible off ramp, however,
will be tricky.

Finding a credible off ramp, however, will be tricky. His rationale will have to at least include a patina of principle, of course, as the GOP begins to focus on the practical concern of electability. In just the last few days he has floated the option of a third party run since the RNC “has not been supportive.” But does he want to be labeled this campaign’s Ross Perot? Not likely. That’s an even greater dead end than failing in his current party.

And as events move closer to the actual nomination and campaign, his interests and the party’s will actually begin to align. The RNC ultimately will want his mouth — and his money — backing the party’s choice. On the other hand, Trump, who won’t want to be marginalized, will do whatever is necessary to finesse a spot at the convention podium trashing Democrats.

The fact (the real fact) is: Trump is not actually running for president. As president, for starters, he’d have to take a sharp cut in pay (while placing his assets in a blind trust) for at least four years! No way. Rather, Trump is simply running to fulfill the latest iteration of whomever it is he currently sees himself as. The implication for his party be damned.

But what’s the worst that can happen? He could repair the break with NBC and return to firing TV contestants, just as his fellow Republicans will have fired him.

[Bill Freeland was a contributor to The Rag in Austin and Liberation News Service (LNS) in New York. Read more articles by Bill Freeland on The Rag Blog.]