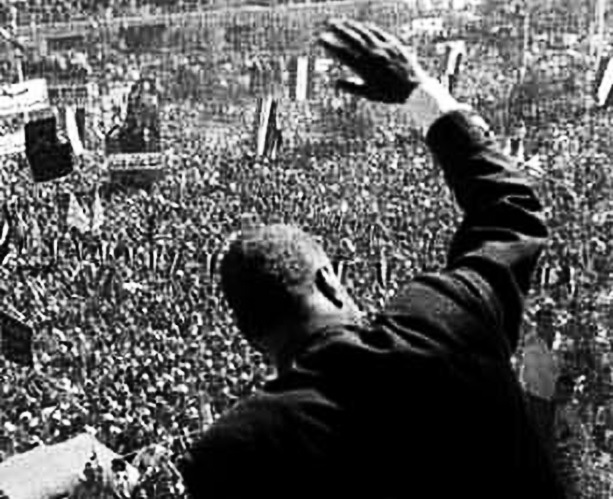 Between April 1954 and the second half of 1954, “the arrests and prosecution of communists” in Egypt “was stepped up” by Nasser’s regime and “dozens of” Egyptian leftists received “long-term jail sentences at hard labor,” according to Selma Botman’s The Rise of Egyptian Communism, 1939-1970.

In addition, after “an assassination attempt by a Muslim Brother” on Nasser’s life failed, according to Jason Thompson’s A History of Egypt, “perhaps as many as 50,000 people were arrested and over 1,000 put on trial,” “six Brothers were hanged,” and Sayid Qutb, who had inherited Hasan al-Banna’s mantle as the Muslim Brotherhood’s “leading member,” “spent the next 10 years in prison,” and “within a month, all political parties had been abolished, their leaders imprisoned, and the opposition press closed” in Egypt.

But Nasser’s military regime then signed an arms deal with the Soviet Union in September 1955 (and apparently lost its CIA-backing), finally obtained in January 1956 the withdrawal of all UK troops from Egypt, and next nationalized the previously UK and French-owned Suez Canal in Egypt on July 26, 1956.

Around the time of the Suez War, Nasser’s regime then stopped imprisoning Egyptian leftists until 1959. Then, “in Washington, in…October [1956], the [U.S.] National Security Council discussed covert ways of getting rid of Nasser” since “[then-U.S. President] Eisenhower had declared himself against a frontal attack, but he mused about various alternative methods,” according to Lloyd Gardner’s The Road to Tahir Square.

But on January 8, 1958, the now-released leftist members of the Egyptian Movement for National Liberation [EMNL] and other political groups of Egyptian communist activists joined together to form the United Communist Party of Egypt.

Between 1956 and 1957 the number of Egyptians of Jewish religious background living in Egypt decreased from 50,000 to less than 9,000. According to the Encyclopedia Judaica, in November 1956, “immediately after the Sinai Campaign” of the Israeli military, “hundreds” of Egyptians of Jewish background “were arrested” by Nasser’s military regime and “about 3,000 were interned without charge in four detention camps.”

The Egyptian government then “served notice on thousands of Jews to leave the country within a few days;” and “the deportees were made to sign statements agreeing not to return to Egypt and transferring their property to the administration” of the Egyptian government, according to the same book.

The Encyclopedia Judaica also noted that “the International Red Cross helped about 8,000” Egyptians of Jewish background “to leave the country, taking most of them to Italy and Greece in chartered boats,” the system of deportation continued into 1957,” and “other Jews left voluntarily” in 1957 “after their livelihoods had been taken from them.”

That same year, as A History of Egypt noted, “in retaliation for what became known as the War of the Tripartite Aggression in Egypt, the Egyptian government” also “sequestered all French and British property” in Egypt; and all French and UK citizens, regardless of religious background, “who were resident in Egypt were ordered to pack one suitcase and depart immediately.”

And less than a year after Nasser’s regime merged with a pro-Nasserist regime in Syria on February 1, 1958, to form the United Arab Republic (which lasted until a military coup on September 8, 1961, by Lt. Col. Abd al-karim al-Nahlawi in Syria produced a Syrian regime that withdrew from the Nasser-dominated United Arab Republic), Nasser’s military regime again began imprisoning Egyptian leftists. As The Rise of Egyptian Communism, 1939-1970 recalled:

On Jan. 1, 1959 hundreds of communists were arrested and imprisoned and a campaign of sustained repression was implemented whose goal was the complete destruction of Egyptian Marxism. The communists were stunned by the arrests, and…by the brutal treatment they received in prison.

According to Muhammad Sid Ahmad, no one in the movement expected Nasser to behave so harshly since the left had undertaken to endorse the government, and even when it was critical of individual policies of the regime, it was done within a line of general support. Nasser nevertheless…through imprisonment and torture—intended to put an end to organized Marxism in the country…

The socialist transformation of the Egyptian state was initiated in July 1961 with the following measures: (1) profit sharing, whereby 25 percent of profits in all enterprises were to go to workers; (2) participatory management by which 4 employees (at least 2 from labor) were to be elected by employees to the management boards of all enterprises; (3) a ceiling of 5,000 Egyptian pounds was placed on annual wages; (4) a progressive income tax was enacted to increase to 100 percent of income over 10,000 Egyptian pounds and 149 companies, including 15 banks and 17 insurance companies, were nationalized; (5) 51 percent of 91 companies not nationalized was to be publicly owned; (6) mass transportation was taken over by the public sector; (7) the maximum amount of agricultural land that could be owned was limited to 100 feddans; and (8) all rents were permanently frozen.

Between 1960 and 1964, real wages also “increased by one-third” for Egyptian workers, “while the number of weekly hours of work declined by 10 percent,” according to Solidarity Center’s 2010 report, “The Struggle for Worker Rights in Egypt.”

On May 21, 1962, after Nasser’s military regime also nationalized Egypt’s flour mills and pharmaceutical companies, it adopted a National Charter, which “proclaimed Egypt to be a socialist, anti-imperialist, and Arab nationalist state” despite having imprisoned so many Egyptian leftists between 1959 and 1961, according to the same book.

In addition, despite its frequent acts of political repression, Nasser’s military regime was able to increase the “average life expectancy” in Egypt “from 43 to 52 years” between 1952 and 1970, according to The Rough Guide To Egypt.

According to James Gelvin’s The Arab Uprising: What Everyone Needs To Know, Nasser’s regime also “significantly reduced the ranks of the unemployed” by passing a “Public Employment Guarantee Scheme, which, as the name says, guaranteed every university graduate a job in the public sector” and “the scheme was amended three years later to include all graduates of secondary technical schools” in Egypt.

The same book also recalled that “declaring an education to be a right of every citizen…Nasser eliminated fees at Cairo University” and “the state also attempted to keep household commodities affordable by furnishing subsidies for many of them, including basic foodstuffs, petroleum products, electricity and water.”