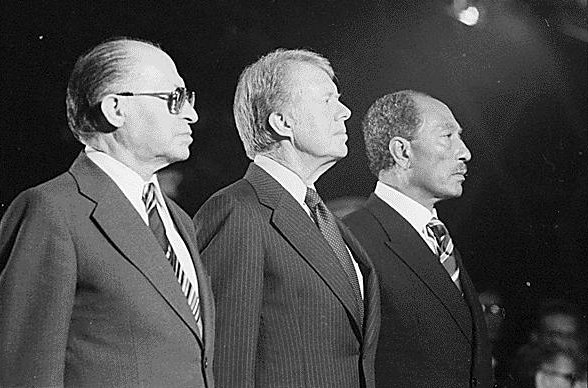 In January 1977, the U.S. government-aligned Sadat regime again made mass arrests when mass demonstrations broke out in Cairo and the 12 other main Egyptian cities. The demonstrators were protesting the Egyptian government’s efforts to take away food subsidies the government had been providing for Egypt’s still-impoverished masses.

(In December 1976 International Monetary Fund (IMF) and World Bank officials had demanded that Sadat’s regime cut $64 million from direct subsidies in exchange for a $450 million credit with the IMF.)

According to Atef Said’s 2009 “Egypt’s Long Labor History” article in Against The Current, “the uprising began with textile workers demonstrating in the Supurp section of Cairo (in the Helwan district) as well as by the navy in the Alexandria arsenal.”

And according to Jason Thompson’s A History of Egypt:

When the subsidy cuts were announced, riots exploded in Cairo and Alexandria, the worst in 25 years. Shops were ransacked, especially those containing imported goods; Sadat’s offices at the Abdin Palace were even attacked. Angry crowds chanted, “Sadat dresses in Style, while we live seven to a room.” (Sadat’s selection as one of the world’s ten best-dressed men by the Italian Chamber of Haute Couture did nothing to endear him to the Egyptian masses.)…

The people shouted, “Nasser! Nasser!” The army had to be called in to restore order. The official death count, probably underestimated, from the three days of violence was over 150. The subsidy cuts were hastily rescinded…

Yet “both the Muslim Brotherhood and the Islamic Associations condemned the rising and sent messages of support to the state against what they called a `Communist conspiracy,’” according to Chris Harman’s 1994 article on Egypt.

As Dilip Hiro’s Holy Wars: The Rise of Islamic Fundamentalism noted, “since such actions ran counter to Islamic sentiment at home…it widened the gulf between” Sadat’s “regime and the Islamic groups” and “helped the Islamic movement…to widen its base” so that “in the spring 1978 elections for the student union officials, the Islamists won 60 percent of the posts.”

The “impending signing of a peace treaty between Egypt and Israel in March 1979 so angered the Islamic students that they mounted anti-government demonstrations at Alexandria and Asyut universities: a daring step, since it made the demonstrators liable to life imprisonment.”

The same book also recalled that “in late August [1981], the Israeli Prime Minister Menachem Begin reportedly warned Sadat that Israel would not honor its commitment in the [1979 peace] treaty to vacating the Sinai Peninsula in April 1982 if open criticism of the treaty was tolerated in Egypt.”

So in early September 1981, Sadat’s regime “suddenly jailed more than 1,500 people” who “were thought to be Muslim militants,” “…but the roundup reached all across the political spectrum, including the well-known journalist Muhammad Hasanein Heikal and the feminist leader Nawal al-Saadawi” as well as “160 Copts” of the Christian minority, according to A History of Egypt.

In addition, according to Holy Wars: The Rise of Islamic Fundamentalism, Sadat then “purged the…military of 200 officers suspected of being” pro-Muslim Brotherhood.

But on October 6, 1981, Sadat was assassinated by Egyptian military personnel who were apparently supporters of Islamic fundamentalist extremist groups. As Holy Wars recalled:

Four soldiers armed with automatic weapons and hand grenades attacked the review stand at the military parade in a Cairo suburb… They killed Sadat and 7 others. They were led by 24-year-old Lt. Khalid Ahmad Shawki Islambouli… Islambouli and his 3 colleagues belonged to Al Jihad organization [Munazzamat al Jihad]…

Ordinary Egyptians demonstrated their passive approval of the assassins’ act by refraining from public mourning… During his trial Islambouli outlined his reasons for killing Sadat: the Egyptian President had made peace with Israel; he had persecuted “the sons of Islam” by his wholesale arrest of them in early September [1981]; and the current laws of Egypt, being incompatible with the Sharia, imposed suffering on believing Muslims…

Following Sadat’s assassination, his vice-president — former Egyptian Air Force Marshall Hosni Mubarak — took over as head of the Egyptian military’s regime; and, according to A History of Egypt, Mubarak then “used his authority firmly, suppressing an uprising in Asyut later in October [1981] with a death toll of 87 and jailing another 2,000 people around the country.”

Thirty-seven percent of all the people living in Egypt still lived below the poverty line in 1981 (with 44 percent of all Egyptians living in rural areas still impoverished).  During the 1980s, however, increasingly visible mass political opposition to the Egyptian military regime of Mubarak seemed to increase.

As Tareq Y. Ismael and Rifa‘at El-Sa’id’s The Communist Movement in Egypt: 1920-1988 noted, the Egyptian secular left “scored a major success in the 1983 election to union committees and boards.” But, not surprisingly, “”intervention by the” dictatorial Mubarak regime’s “security services prevented the elected candidates of the left to win seats on ruling trade union bodies,” according to the same book.

By the mid-1980s, inflation in Egypt “ran as high as 24 percent” and “increases in wages fell far behind rises in the cost of living,” according to A History of Egypt. As a result, “in 1985-1986 alone some 100,000 people” in Egypt “took part in more than 40 strikes…in a country in which 20 percent of the labor force worked in factories”; and “in February 1986 a mutiny broke out in the” Egyptian “security forces,” according to The Communist Movement in Egypt: 1920-1988. In response, “all these actions were brutally suppressed by the authorities” of Mubarak’s military regime; and “many strikers” in Egypt “were imprisoned,” according to the same book.

Yet, according to The Communist Movement in Egypt: 1920-1988, “by 1988 there were indications of the emergence of united or common front of progressive forces” in Egypt. And the same book described the state of the movement to democratize Egyptian society in 1988 in the following way:

Our comrades have sponsored the establishment of the Union of Egyptian Peasants which unites several thousand agricultural laborers, owners of small land plots and tenant farmers. The union…fights against the onslaught on the gains of the peasants won as a result of the agrarian reform…

There is also growing opposition to the policy of the authorities on the part of…unions of lawyers, journalists, physicians and actors, clubs of college and university teachers, the committee for the defense of national culture, as well as youth, student and women’s associations…

The Egyptian Communist Party, still having to operate underground, is playing a…part in…these actions…The demand that the ban on the Communist Party be lifted is heard increasingly…

Despite the 1980s growth in the movement for democratization in Egypt, in a late 1980s “trial of the Egyptian Communist Party,” the court system of the Mubarak regime was still able to produce a verdict which sentenced 34 anti-imperialist communists and other anti-imperialist Egyptian activists to prison.

And according to Atef Said’s 2009 “Egypt’s Long Labor History” article in Against The Current, during the Egyptian steel mill workers strike in 1989, “the police killed workers” and “strike leaders were arrested and brutally tortured over several weeks.”