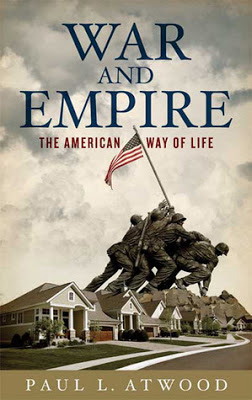 The book details the nation’s progression from a bunch of European colonizers to an international syndicate stealing resources and labor and replacing them with U.S. corporate products and empty culture.

There is a debate currently taking place in the Burlington, Vermont, region over the Pentagon’s desire to station F-35 fighter bombers at an Air National Guard base nearby.

As usual, the proponents of the planes and their “bedding down” (as the Pentagon calls this action) in Vermont make claims of jobs and other benefits if the planes are based in Vermont. Opponents oppose the planes on a number of grounds: noise levels and the accompanying loss of property values, health issues related to the noise, and the dependence on the war economy, to name a few.

Like most decisions by the Pentagon, the opinions of the people affected are the least important of any of the factors involved.

The reason I mention the debate, however, has much to do with a book I just finished reading: The book, War and Empire by Paul Atwood (acting director of the William Joiner Center for the Study of War and Social Consequences and a faculty member in the American Studies Department at UMass-Boston), is a survey of the ongoing project of American Empire.

As I follow the remarks of different people engaged in the F-35 debate, echoes of the nationalist conceit known as American exceptionalism are present everywhere. Of course, the most obvious have come from the fiercest proponents of the F-35 and the military they service. One such person put it plainly as possible when he wrote to the local Gannett outlet that the roar of the fighter planes was the sound of freedom. Who cares about the death and destruction they represent, much less some pansy’s hearing?

On the other side of the argument, however, are those who always preface their opposition to the planes’ presence with praise for the military and its mission of “protecting our freedom.” Then there is Vermont’s liberal Congressional delegation, all of whom are quite supportive of the Pentagon’s plan.

Atwood’s text provides a litany of instances and a multitude of words from throughout U.S. history detailing the nation’s progression from a bunch of European colonizers to an international syndicate stealing resources and labor and replacing them with U.S. corporate products and empty culture. While this occurs, politicians and their media sycophants gloss the whole enterprise over with words like freedom and democracy.

Atwood’s judicious use of quotes and his explanation of historical incidents explain U.S. history in a manner unfamiliar to many U.S. citizens. It is this unfamiliarity which assists the creators of Empire in their ongoing march.

Other books have done U.S. history in a manner similar to Atwood. Howard Zinn’s The People’s History of the United States comes quickly to mind. However, where Zinn emphasizes the popular (and not so popular) resistance to the U.S. imperial project, Atwood’s text focuses on the logical progression from colonial settlement to the wars in Iraq and Afghanistan.

The economic underpinnings of empire are mentioned and discussed, especially in relation to the religion, racism, and nationalist rationales that are used to encourage support for policies that primarily benefit corporate entities.

The history Atwood narrates in War and Empire is not new material for the critical student of U.S. history. Unfortunately, those are becoming few and far between. Indeed, it seems to this writer that the predominant approach to history these days is one that historian Newt Gingrich would be happy to teach.

While school boards in Arizona remove books discussing the history of the American Southwest from a Latino point of view and textbook publishers allow censors in Texas to remove negative mentions of slavery from history textbooks, many other U.S. residents get their version of history from television networks beholden to profit, religion, and an American triumphalism that denies and glosses over criticism of U.S. policy.

In short, there has never been a greater need for Atwood’s book. Its concise and politically neutral narrative, combined with its brevity, make it the perfect U.S. history book for any interested reader, no matter what their politics or scholarly status.

Getting back to the debate over the F-35s in Vermont, especially in relation to this book. It is precisely because of their misunderstanding of U.S. history and the military’s role in it that both proponents and opponents of the planes can praise the military for protecting their freedom. Perhaps if they read War and Empire, neither side would be linking the words freedom and U.S.military in their arguments.

Then again, if they did, at least they would be conscious of the misconception they were perpetrating.