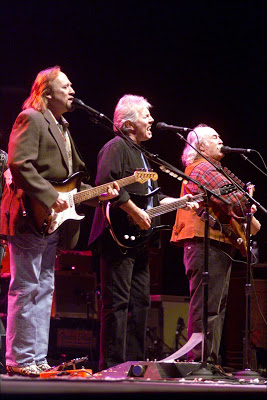 Shamans of sound:
A transcendent Crosby, Stills and Nash

Hearing CSN’s standards reminds us boomers of a time and place, an era of history when we were young and open and a whole new genre of music and politics and way of being was in the birthing.

The power of music is one of the great unknowns in the human saga. For reasons we don’t quite understand (yet) its vibrations can lift us to great heights, drop us down into deep depression, liberate us, make us joyous, help us grieve, and so much more.

Thus its practitioners — the best of them — can rise to shaman status. They can speak to higher realities, lead us on political issues, arouse our spirits, calm our souls.

Those with the power are rare. There is a huge corporate industry designed to manufacture and sell commercial imitations.

But real ones still walk among us, and if we catch them at the right moment, they can move us as little else in this life.

Monday night, July 30, was such a time. Crosby, Stills and Nash played under a pavilion on the Ohio River outside Cincinnati on a gorgeous warm night before some 4,000 folks who must be described at this point as elders.

(By way of disclosure, I’ve worked with Graham Nash since 1978, when he toured California with Jackson Browne, raising funds and consciousness to fight the Diablo Canyon nukes. With Bonnie Raitt, Jackson and Graham are the core of www.nukefree.org, whose website I edit.)

The show was a mix of old and new, but stayed within the terrain of melodies and harmonies the trio essentially invented.

Wooden ships on the water
Very free
And easy
The way it’s supposed to be.

Hearing CSN’s standards reminds us boomers of a time and place, an era of history when we were young and open and a whole new genre of music and politics and way of being was in the birthing. There was a war on and we wanted peace, and injustices and bigotries we wanted done away with, and with all that came a mindset and culture that changed the world — but not yet enough.

With a superb supporting cast (including David Crosby’s son, James Raymond), the band reminds us of why these songs became standards in the first place. It’s not enough that music is of a time — it also has to be good on its own. The deep resonance of the chord changes, the perfect harmonies, master guitar riffs, intriguing lyrics… there are reasons these songs are still with us. “Carry On,” “Helpless,” Suite: Judy Blue Eyes,” “Our House” will always carry the touch of greatness that inspired them.

Thankfully, the group has also kept its political focus. Graham dedicated “Teach Your Childre” to the underpaid, overworked professionals who do just that.

He also sang “Almost Gone,” a searing accusation written with James Raymond about the ghastly torture of Bradley Manning, the whistleblowing young soldier being pilloried by our imperial army for the “crime” of telling the truth.

Graham’s epic “Winchester Cathedral” asked “how many people have died in the name of Christ?” The question was underscored with “Military Madness,” reminding us that our species continues to poison and bleed itself with an unfathomable addiction to violence and war that could someday soon kill us all.

To do this kind of politics in a concert for which people have paid good money is a delicate dance. But these guys are good enough — and then some — to make it work. It is, after all, who they are, and have been, and we would expect no less.

The riverfront night was clear and clean, but global-warmed, and at one point Graham complained of the heat.

“Take off your shirt,” someone yelled.

Well, yeah, but he and his brothers haven’t lost a beat, and their core audience has the aura of being as fit and bright and full of life as we were way back when.

In those days, we never doubted we would live forever. In the parallel universe CSN still has the power to create, it seems we actually have.

[Harvey Wasserman’s History of the United States is at www.solartopia.org, along with A Glimpse of the Big Light: Losing Parents, Finding Spirit. He edits www.nukefree.org. Read more of Harvey Wasserman’s writing on The Rag Blog