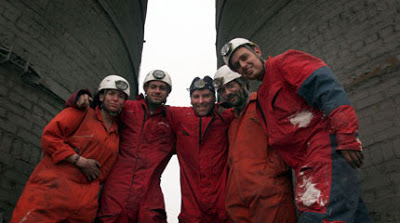 Five of the ‘Kingsnorth Six’ at the top of the 200m chimney of power station.
Jury cleared six Greenpeace activists of £35,000 worth of criminal damage to a coal-fired power station
By Michael McCarthy / September 11, 2008

The threat of global warming is so great that campaigners were justified in causing more than worth of damage , a jury decided yesterday. In a verdict that will have shocked ministers and energy companies .

Jurors accepted defence arguments that the six had a “lawful excuse” to damage property at Kingsnorth power station in Kent to prevent even greater damage caused by climate change. The defence of “lawful excuse” under the Criminal Damage Act 1971 allows damage to be caused to property to prevent even greater damage – such as breaking down the door of a burning house to tackle a fire.

The not-guilty verdict, delivered after two days and greeted with cheers in the courtroom, raises the stakes for the most pressing issue on Britain’s green agenda and could encourage further direct action.

The plan to build a successor to the power station is likely to be the first of a new generation of coal-fired plants. As coal produces more of the carbon emissions causing climate change than any other fuel, campaigners claim that a new station would be a disastrous setback in the battle against global warming, and send out a negative signal to the rest of the world about how serious Britain really is about tackling the climate threat.

But the proposals, from the energy giant E.ON, are firmly backed by the Business Secretary, John Hutton, and the Energy minister, Malcolm Wicks. Some members of the Cabinet are thought to be unhappy about them, including the Foreign Secretary, David Miliband, and the Environment Secretary, Hilary Benn. Mr Brown is likely to have the final say on the matter later this year.

During the eight-day trial, the world’s leading climate scientist, Professor James Hansen of Nasa, who had flown from American to give evidence, appealed to the Prime Minister personally to “take a leadership role” in cancelling the plan and scrapping the idea of a coal-fired future for Britain. Last December he wrote to Mr Brown with a similar appeal. At the trial, he called for an moratorium on all coal-fired power stations, and his hour-long testimony about the gravity of the climate danger, which painted a bleak picture, was listened to intently by the jury of nine women and three men.

Professor Hansen, who first alerted the world to the global warming threat in June 1988 with testimony to a US senate committee in Washington, and who last year said the earth was in “imminent peril” from the warming atmosphere, asserted that emissions of CO2 from Kings-north would damage property through the effects of the climate change they would help to cause.

He was one of several leading public figures who gave evidence for the defence, including Zac Goldsmith, the Conservative parliamentary candidate for Richmond Park and director of the Ecologist magazine, who similarly told the jury that in his opinion, direct action could be justified in the minds of many people if it was intended to prevent larger crimes being committed.

The acquittal was the second time in a decade that the “lawful excuse” defence has been successfully used by Greenpeace activists. In 1999, 28 Greenpeace campaigners led Lord Melchett, who was director at the time, were cleared of criminal damage after trashing an experimental field of GM crops in Norfolk. In each case the damage was not disputed – the point at issue was the motive.

The defendants who scaled the 630ft chimney at Kingsnorth, near Hoo, last year were Huw Williams, 41, from Nottingham; Ben Stewart, 34, from Lyminge, Kent; Kevin Drake, 44, from Westbury, Wiltshire; Will Rose, 29, from London; and Emily Hall, 34, from New Zealand. Tim Hewke, 48, from Ulcombe, Kent, helped organise the protest.

The court heard how, dressed in orange boiler suits and white hard hats bearing the Greenpeace logo, the six-strong group arrived at the site at 6.30am on 8 October. Armed with bags containing abseiling gear, five of them scaled the chimney while Mr Hewke waited below to liaise between the climbers and police.

The climbers had planned to paint “Gordon, bin it” in huge letters on the side of the chimney, but although they succeeded in temporarily shutting the station, they only got as far as painting the word “Gordon” on the chimney before they descended, having been threatened with a High Court injunction. Removing the graffiti cost E.ON £35,000, the court heard.

During the trial the defendants said they had acted lawfully, owing to an honestly held belief that their attempt to stop emissions from Kingsnorth would prevent further damage to properties worldwide caused by global warming. Their aim, they said, was to rein back CO2 emissions and bring urgent pressure to bear on the Government and E.ON to changes policies. They insisted their action had caused the minimum amount of damage necessary to close the plant down and constituted a “proportionate response” to the increasing environmental threat.

Speaking outside court after being cleared yesterday, Mr Stewart said: “This is a huge blow for ministers and their plans for new coal-fired power stations. It wasn’t only us in the dock, it was the coal-fired generation as well. After this verdict, the only people left in Britain who think new coal is a good idea are John Hutton and Malcolm Wicks. It’s time the Prime Minister stepped in, showed some leadership and embraced the clean energy future for Britain.”

He added: “This verdict marks a tipping point for the climate change movement. When a jury of normal people say it is legitimate for a direct action group to shut down a coal-fired power station because of the harm it does to our planet, then where does that leave Government energy policy? We have the clean technologies at hand to power our economy. It’s time we turned to them instead of coal.”

Ms Hall said: “The jury heard from the most distinguished climate scientist in the world. How could they ignore his warnings and reject his leading scientific arguments?”

Thanks to S.M. Welhelm / The Rag Blog