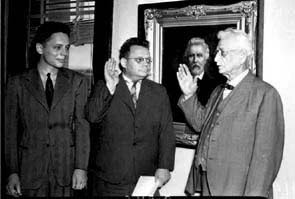 The Maverick political family — Maury Maverick, Sr. is sworn in by his father as San Antonio mayor, as Maverick, Jr. looks on.

John McCain has appropriated a cherished name from Texas progressive politics. A scoundrel like McCain calling himself a “maverick” doesn’t sit too well with those on the Texas political left. Fontaine Maverick, grandaughter of famed Texas iconoclastic politico Maury Maverick, Sr. and niece of Maury Maverick, Jr., wrote of this ironic bit of thievery in The Rag Blog on August 30. Now “Paul in Austin” — aka Paul Robbins — has posted two interesting and informative pieces on Daily Kos about the subject.

This is my second diary about the irony where John McCain is branding himself a Maverick, when the name comes from a family of progressive Democrats in Central Texas, including two elected officials, Maury Maverick, Sr. and Maury Maverick, Jr., both of San Antonio.

Maury Sr. was the grandson of the original Texas Maverick Sam, one of the signers of the Texas Declaration of Independence. Maury earned a law degree, and then fought in W.W.1, where he received a Silver Star and Purple Heart. He was county tax collector (1929-1931). He was elected for two terms to Congress (1934-1938). He was defeated, in part, by red-baiting tactics. Maverick was elected Mayor of San Antonio between 1939-41. But he lost reelection in main because he supported freedom of speech through a crowd permit to a labor union with ties to Communists.

I am a friend of Fontaine Maverick, Maury Jr.’s niece. In discussing McCain’s identity theft of her family name, she directed me to a fascinating online book by the late Maury Sr.

Part autobiography, part history, part storytelling, and a good part political philosophy, this book-now-blog describes the life and opinions of an unrepentant Southern Democrat and liberal who thought it was society’s duty to protect the poor and disadvantaged, who believed government was part of the solution and not part of the problem, and who had concerns about the environment long before it was a national focus.

He decried overpopulation in the South as one of its main causes of poverty, the environmental degradation of its land, and its disrespect for labor.

Put in plain American language, this means the South has plenty of natural resources, but they are being wasted; that in skilled trades the region is low; that the population is too great, and although there is a culture of a kind, this culture is unsatisfactory. And it also means the South could be a prosperous and happy place, but isn’t.

As for labor, I find not a single state which has a minimum wage law. Only one, Arkansas, has approved the Child Labor Amendment. Labor is generally in a bad shape. And it must be organized, so that it can build up a purchasing power, buy itself out of hock, and trade with the rest of the nation as an equal. This needs progressive labor legislation, with decent pension laws.

It is a damned outrage that a poor man can’t go to a doctor. Why should a man in moderate circumstances have to die because he hasn’t got the money for an operation and hospital expenses?

On classism and the American Revolution:

The new American Tories were worse than the British Lords—and some of them, including the arrogant, swell-headed, lace-collared John Hancock, merely got out of paying their debts. They quickly proceeded to exploit their own people at home.

On race, he was the only Southern Democrat of his day to vote in support of anti-lynching legislation.

His monograph had interesting stories about how, at the beginning of the Great Depression, he and 2 friends disguised themselves, Mark Twain-style, as hobos and visited the missions, soup kitchens, and hobo camps to see the poverty first hand.

We stood there in the cold. It was drizzling, and some sleet came down. A youngster about thirteen years of age stood by me, hatless and coatless. The sleet fell on his hair.

In a group under a shed there were about twenty-five men. One seemed to have pneumonia. I came up and insisted that the man go to the hospital, but all said that there was no use, that he had already been refused because he was not a resident of the town. I never found out whether this particular incident was true, but widely, all over the country, “transients” were denied hospitalization even in the gravest emergency cases.

I found that a very large proportion of those riding the freight trains were tenant farmers, share-croppers, and agricultural workers. The old-time tramp constituted only a negligible portion, say ten or fifteen per cent of the whole. People just didn’t have any place to go. I traveled with one old man who had with him his two young sons. He lost his farm, became a tenant, then lost out completely. I did not have the heart to ask him if he had a wife and daughters.

Back in San Antonio, after our return home, I organized the transient relief stations…We had relief stations at all the freight depots and when anyone came in we gave him a very cheap meal of hot coffee, bread and beans, and sometimes Mulligan stew. I had freight train schedules made up and gave information as to the best travel routes, and the best place to board trains without getting in trouble.

This spirit and conscience were inherited by his son, Maury Jr. I will save this for another installment.

But I ask again how anyone can equate Maury Maverick’s life and philosophy with John McCain?

Here is Paul in Austin’s previous post about the real Maverick:

The McCain campaign has become infamous for using other people’s copyrighted material. During the campaign, popular songwriters have chafed about how their music was used without permission. These have included Jackson Browne, John Mellencamp, and most recently, the Wilson sisters of Heart, when their song “Barracuda” was used as the theme for the new Vice President.

But McCain’s campaign is also stealing a family name and a political legacy: a Democratic one. If you use the word “Maverick” in Central Texas, you are referring to a family of progressive Democrats that McCain has decidedly little in common with. This is indeed the family descended from the original 19th Century Texas Maverick. And some of his descendents are not at all pleased. While one cannot copyright a name in the public domain, McCain’s use of the word goes over as well in this region as trying to dub McCain a “Kennedy” in the Northeast.

The first Texas Maverick hailed as Sam. He migrated to Texas in 1835. He was a patriot who was one of the signers of the Texas Declaration of Independence, fought in the Texas Revolution, and was jailed in a Mexican prison for it.

After the war, he was a lawyer and land speculator that sometimes took cattle instead of money for payment. He never branded them, so they were eventually appropriated by neighbors. These unbranded cattle became known as ‘mavericks.”

Sam was the grandfather of Maury Maverick Sr., a New Deal Congressman and Mayor of San Antonio in the 1930s.

…he and a group of other liberal Democrats pressed to push the New Deal further than President Franklin Roosevelt had in mind. These members of Congress — first identified on March 10, 1935, as “the Mavericks” by the Washington Herald — pushed through legislation to clear slums, created the National Cancer Institute, and passed bills to conserve natural resources.

Maverick was elected mayor of San Antonio in 1939 and served only one term, yet still ranks as the city’s most progressive mayor. He got federal money to build the San Antonio River Walk and reformed corruption at City Hall.

His political undoing came when he supported granting access to the Municipal Auditorium for a rally for a labor union with Communist connections. A lynch mob emerged outside the auditorium. They hung Maury Maverick’s effigy. His unqualified support for freedom of speech effectively ended his political career.

As a member of the Texas House during the McCarthy era, Maury Jr. broke with fellow Democrats to oppose the banning of books and other anti-communist hysteria laws that he believed violated the U.S. Constitution. As a civil rights lawyer, he broke with President Lyndon Johnson, once his friend, over the Vietnam War.

Maury Jr.’s niece, Fontaine Maverick (now of Austin), was recently quoted in the Austin Chronicle about the sordid misuse of her name.

Maury’s niece Fontaine* wrote last week that her brother (yet another Maury, in a lengthy line) told her that “if he hears that John McCain is a Maverick ONE MORE TIME, he is going to shoot the TV. … Every time we hear that use of our name, it is like fingernails on a blackboard times ten.” Expect to feel that sensation a lot, this week and over the next couple of months – while you do everything you can to make certain it won’t persist for the next four years.

McCain and his handler’s have proved they will misuse art, history, and whatever else they think they have to in their efforts to win. I think we should challenge McCain to live up to the standard that the real Mavericks have set for him.

And for more background on the Maverick legacy: This Maverick The Real Deal by Joe Holley / The Rag Blog / March 1, 2008

1 Response to McCain a Faux Maverick : Stealing a Texas Tradition