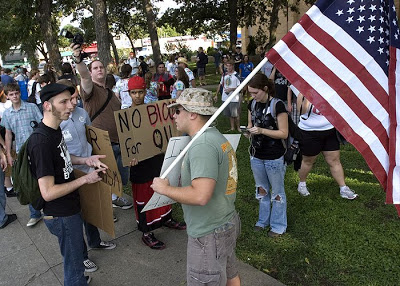 Denton: Jason Netek, far left, and a U.S. Marine Corps Reservist identified as ‘Chad’ argue about the war in Iraq as members of the Denton chapter of Students for a Democratic Society prepare for an anti-war march starting at the University of North Texas campus.
Protesters ‘carried signs with messages such as “Iraq Never Attacked US,” “Expose the 9/11 Cover-up” and “War is Terrorism”’
By Lowell Brown / September 12, 2008

College students marched through downtown Denton on Thursday afternoon to protest U.S. foreign policy and promote peace on the seventh anniversary of the Sept. 11 terrorist attacks.

An estimated 150 to 250 students walked down Hickory Street from the University of North Texas campus to Quakertown Park for a rally organized by the Denton chapter of Students for a Democratic Society. Many carried signs with messages such as “Iraq Never Attacked US,” “Expose the 9/11 Cover-up” and “War is Terrorism.”

At one point during the mile-long walk, marchers chanted “9/11 was an inside job!” and “Expose the truth!” — although some participants later said they believed al-Qaida was behind the attacks.

UNT senior Andrew Teeter said he and fellow march organizers want a new inquiry into the events of Sept. 11, 2001, an end to the “occupations” of Iraq and Afghanistan and “truth in military re­cruitment” in Denton.

“So this brings all sorts of people out with different passions,” Teeter said.

“This is really an important day,” said state Rep. Lon Burnam, director of the Dallas Peace Center, a nonprofit volunteer group. “A lot of people all over this country are going to be commemorating the seventh anniversary [of Sept. 11] with a sense of tragedy for what happened on that day. I think we are all here commemorating that date with a sense of tragedy for what we have allowed to happen since that day.”

Aron Duhon, a UNT graduate student, said he marched to highlight the failure of the United States to withdraw troops from Iraq since the 2003 invasion.

“I support an immediate withdrawal of our troops without conditions, which is something neither of the [major-party presidential] candidates are talking about,” Duhon said. “I feel like this is a way to make our voices heard.”

Police officers escorted the marchers on bicycles and patrol cars, stopping traffic as the students passed through the Square.

Three counter-protesters followed the parade chanting “USA! USA!” and “Go back to MySpace!”

The men said they were U.S. Marines and Iraq war veterans, but they would only identify themselves by their first names, citing military policy.

“It’s their right to protest and I fight for that,” said Jonathan, one of the men. “But it just seems a little disrespectful” to protest on the Sept. 11 anniversary.

Police said an estimated 150 people took part in the march, but organizers said the number was closer to 250.

Other groups involved with the event included Peace Action Denton and the Campaign to End the Death Penalty.