BushCo: It Was Worse Than We Thought 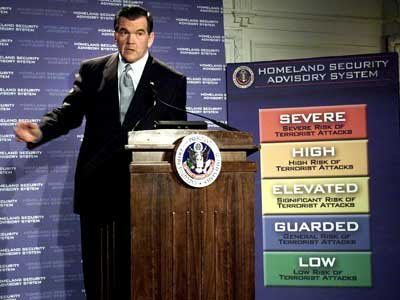 Back in the bad old days of Bush’s corrupt gang, we on the left were pilloried for suggesting that the administration was manipulating terrorism-related news in order to win the 2004 elections. But when Tom Ridge says it ….

In fact, I argued in summer, 2004, that when Ridge did raise the terrorism alert, it had the unfortunate effect of outing an al-Qaeda double agent who had been turned by the Pakistani government and was helping set a trap for al-Qaeda in the UK. In turn, that caused the British government to have to move against the people it had under surveillance prematurely, harming the case.

Ridge is alleging he was pressured on the eve of the election. But I still wonder about the circumstances of the summer announcement. He might have been being used then, too, and not known it.

And if any of us had said that Dick Cheney was setting up civilian mercenary assassination squads (at least 007 works for the British government), and set things up so that perhaps neither the CIA director nor the president even knew about it, we would have been branded moonbats. But well, that is today’s story.

You shudder to think what hasn’t come out yet.

If Bush and his gang falsely put up the terror alert or even tried to, for partisan political gain, that is a sort of treason. If they thereby ruined a British surveillance operation, they recklessly endangered US and NATO security. If they were arranging for civilian mercenaries to murder people . . . well you’d have to say that they were at least planning to be murderers. (The wingnuts will say that Xe was only being contracted to kill al-Qaeda types; but the wingnuts wouldn’t be able to tell a Barelvi from an al-Qaeda supporter if their lives depended on it, and I wouldn’t exactly trust Mr. Prince to be fair to Muslims.)

The horrible thing is that Wolf Blitzer on CNN assembled David Frum and Frances Townsend, former members of the Bush administration, to sit around on his afternoon news and analysis program on Thursday afternoon and more or less either call Ridge a liar or pooh-pooh the significance of what he is saying. There wasn’t a single centrist or left of center voice to show any outrage. I mean, I know that Time Warner is not made up of people who necessarily care about the little person or social justice or anything. But a little bit of shame?

It isn’t enough that the corporate media lied to us for Bush for 8 years, they are continuing to do it. Give money to Amy Goodman.

This entry was posted in RagBlog and tagged Bush Administration, Political Corruption, War on Terror. Bookmark the permalink.

1 Response to BushCo: It Was Worse Than We Thought