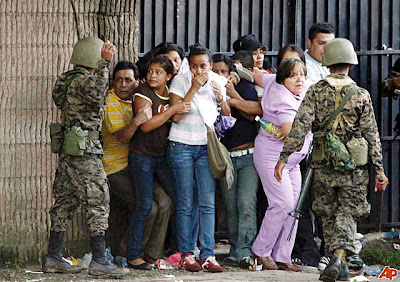 In the past few days, several organizations have issued reports documenting human rights violations committed by military and police forces in Honduras since the coup d’état that ousted President Manuel Zelaya on June 28.

● After five days of meetings with representatives of a number of organizations and interviews with Hondurans jailed or hospitalized following demonstrations against the coup, a delegation from Amnesty International on August 19 released a summary of its findings.

“Mass arbitrary arrests and ill treatment of protesters are a serious and growing concern in Honduras today,” declared Esther Major, a member of the delegation, at a press conference announcing the report.

“Excessive force by police and military has been routine and hundreds of peaceful demonstrators have been subject to arbitrary detention,” the AI report says. It cited as an example a peaceful march in Tegucigalpa on July 30 in which police, who wore no visible identification, charged at demonstrators without warning, beating them with batons as they fled.

Demonstrators later interviewed by AI reported being struck on the back, the buttocks and the backs of their legs. Several hundred demonstrators were detained and taken to jail, the report continues, with no charges being filed against them and no explanation given for their detention.

One demonstrator, who told AI he had been one of over 200 students involved in the demonstration, said, “The police were throwing stones, they rounded us up, they threw us down on the ground and they beat us — there are people with fractures, with head wounds, they beat us on the buttocks. They stole our cameras, they beat us if we raised our heads, they beat us when they were getting us into the police cars.”

The report says women demonstrators have been subjected to sexual intimidation and assaults as well as beatings. There are accounts of police prodding women with truncheons as they lay on the ground. “Why aren’t you at home having sex with your husband?” one officer reportedly asked a demonstrator.

Also targeted for abuse, AI reports, are human rights observers and news media. Roberto Barra, a Chilean photojournalist, told the AI delegates that on July 30 he had been surrounded suddenly by some 20 officers as he photographed police beating demonstrators. His camera was taken and he himself was beaten. “You journalists are responsible for this situation,” the police shouted, “for the bad image abroad, son of a bitch, you’re a communist just like the rest of them”

AI reports an interview with Alex Matamoros, an observer with a Honduran human rights group, who confronted police officers he had seen beating three young men whose hands were tied behind their backs. When Matamoros explained who he was and showed them his ID card, one policeman said, “Keep this piece of shit. Here there are no human rights.” 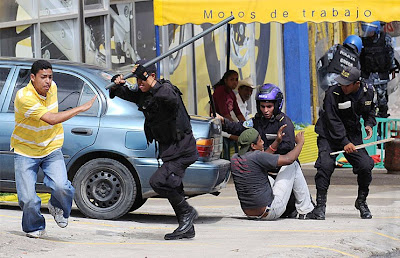 Photo by José Cabezas, Agence France Presse.
● Of greater interest to Hondurans was a similar investigation by members of the Inter-American Commission on Human Rights, an autonomous arm of the Organization of American States. Four of the seven members of the Commission were in Honduras from August 17 to 21 interviewing anti-coup activists, journalists, government officials not directly connected with the coup regime and a few citizens claiming abuse by anti-coup demonstrators.

At a press conference on August 21, the group delivered a preliminary report confirming “the existence of a pattern of disproportionate use of force by the government, arbitrary detentions and control of information with the intention of limiting political participation by a sector of the citizenry.” The group confirmed “repression exerted against demonstrators through military blockades and the arbitrary declaring of curfews.”

The Commission said it had verified the shooting deaths of four individuals and the wounding of others, apparently at the hands of government agents. It claimed further that between 3,500 and 4,000 persons had been detained arbitrarily since the June 28 coup and that from July 24 to 27 between 4,000 and 5,000 persons had been trapped between military roadblocks during demonstrations in the department of El Paraíso, near the Nicaraguan border, with no access to food or water.

In contrast, demonstrators have been peaceful, the report says, except for isolated incidents like a march on August 11 at the Universidad Pedagógica, in Tegucigalpa, where a bus and a U.S.-franchised fast-food restaurant were burned and windows were broken at another U.S.-identified fast-food restaurant.

On the other hand, the Commision also reported statements from parents who claimed their children’s rights had been abused by teachers who had been on strike and had been demonstrating against the coup when they should have been in the classrooms.

Martha Lorena Casco, vice-chancellor in the Micheletti government, dismissed the Commision because, she claimed, it was “infiltrated by the left,” mentioning specifically Venezuelan Luz Patricia Mejía, who heads the group

Photo from AP.
● The Misión de Observación Internacional Feminista (International Feminist Observation Mission), consisting of women from Canada, the United States, Mexico, Guatemala, El Salvador and Costa Rica, spent a week in Honduras to show their solidarity with Feministas en Resistencia (Feminists in Resistance) and to document abuse of women by the coup regime.

At a press conference on August 20, Gilda Rivera of the Honduran group Centro de Derechos de Mujeres (Women’s Rights Center) specified that there were 19 documented cases of police and military abuse of women since the coup and that many other cases have not been reported out of fear of retaliation.

The international group says there has been an increase in the killing of women since the coup, with 51 cases reported for July, an increase of 60 percent over previous months.

One woman, Alba Ochoa, was reportedly beaten, jailed and charged with threats against the security of the state after she happened upon police beating demonstrators in Tegucigalpa. “They arrested me because I yelled at them to stop beating a 16-year-old boy,” she told reporters, “they were beating him with an iron pipe. Then they hit me with a baton, they beat me with an iron pipe. They said, ‘You old whore, it’s none of your business.’” 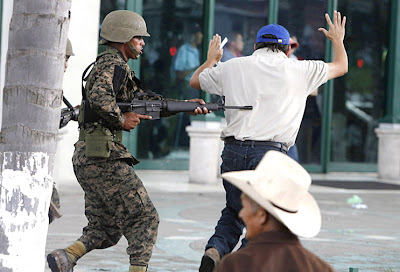 Photo by Eduardo Verdugo / AP.
● The Comité para la Defensa de los Derechos Humanos en Honduras (Committee for the Defense of Human Rights in Honduras) issued a report on August 15 listing the names of the 101 Hondurans who have been shot to death in the country during curfew hours since the June 28 coup with what are known to be, or appear to be, 5.56mm bullets, the caliber used by the armed forces and the police. The victims ranged in age from 14 to 60. Thirty-two of the killings occurred in Tegucigalpa, the capital and largest city, and 53 in San Pedro Sula, the second largest city. The committee holds the de facto government of Roberto Micheletti responsible for the killings. 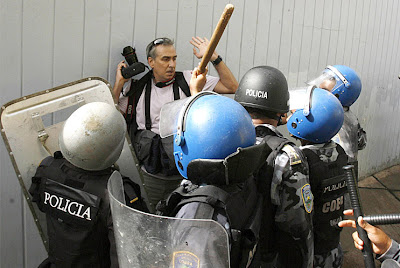 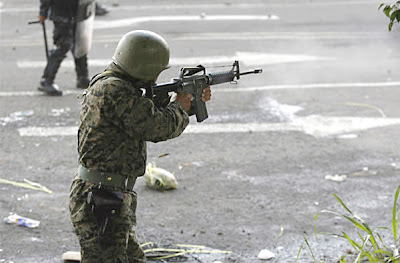 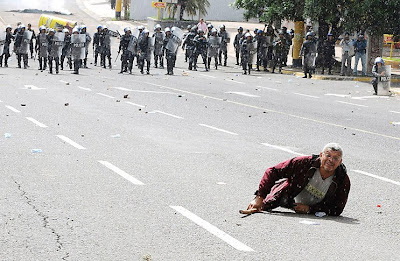 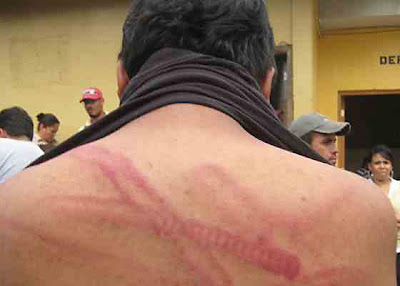