It is no wonder the American public has no clue what is really happening in Iraq (or Afghanistan). Systematically, the Bush administration has been feeding you a lie about how well the surge is going, how calm it is in Baghdad, and on ad nauseum. If you continue to believe, you become nothing more than a sad dupe in a criminal’s shell game. 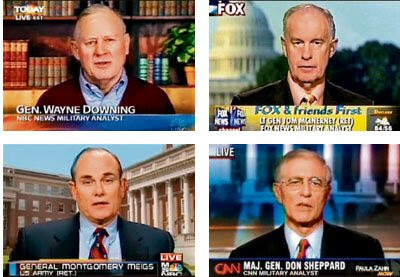 Retired officers have been used to shape terrorism coverage
from inside the TV and radio networks.
Behind Military Analysts, the Pentagon’s Hidden Hand
By David Barstow / April 20, 2008

In the summer of 2005, the Bush administration confronted a fresh wave of criticism over Guantánamo Bay. The detention center had just been branded “the gulag of our times” by Amnesty International, there were new allegations of abuse from United Nations human rights experts and calls were mounting for its closure.

The administration’s communications experts responded swiftly. Early one Friday morning, they put a group of retired military officers on one of the jets normally used by Vice President Dick Cheney and flew them to Cuba for a carefully orchestrated tour of Guantánamo.

To the public, these men are members of a familiar fraternity, presented tens of thousands of times on television and radio as “military analysts” whose long service has equipped them to give authoritative and unfettered judgments about the most pressing issues of the post-Sept. 11 world.

Hidden behind that appearance of objectivity, though, is a Pentagon information apparatus that has used those analysts in a campaign to generate favorable news coverage of the administration’s wartime performance, an examination by The New York Times has found.

The effort, which began with the buildup to the Iraq war and continues to this day, has sought to exploit ideological and military allegiances, and also a powerful financial dynamic: Most of the analysts have ties to military contractors vested in the very war policies they are asked to assess on air.

Those business relationships are hardly ever disclosed to the viewers, and sometimes not even to the networks themselves. But collectively, the men on the plane and several dozen other military analysts represent more than 150 military contractors either as lobbyists, senior executives, board members or consultants. The companies include defense heavyweights, but also scores of smaller companies, all part of a vast assemblage of contractors scrambling for hundreds of billions in military business generated by the administration’s war on terror. It is a furious competition, one in which inside information and easy access to senior officials are highly prized.

Records and interviews show how the Bush administration has used its control over access and information in an effort to transform the analysts into a kind of media Trojan horse — an instrument intended to shape terrorism coverage from inside the major TV and radio networks.

This entry was posted in RagBlog and tagged Iraq, Media. Bookmark the permalink.