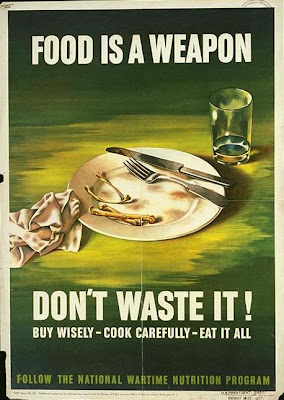 Using food as a weapon is as old as the siege but today’s barbarians have upped the anté by several orders of magnitude.

“…There are only two possible ways in which a world of 10 billion people can be averted. Either the current birth rates must come down more quickly. Or the current death rates must go up. There is no other way. There are, of course, many ways in which the death rates can go up. In a thermonuclear age, war can accomplish it very quickly and decisively. Famine and disease are nature’s ancient checks on population growth, and neither one has disappeared from the scene … To put it simply: Excessive population growth is the greatest single obstacle to the economic and social advancement of most of the societies in the developing world.” — Speech to the Club of Rome by Robert McNamara, Oct. 2, 1979

“Overpopulation and rapid demographic growth of Mexico is already today one of the major threats to the national security of the United States. Unless the U.S.-Mexico border is sealed, we will be up to our necks in Mexicans for whom we cannot find jobs.” —Robert McNamara, then World Bank president, March 19, 1982

McNamara’s thinly veiled genocidal utterances took place over thirty years ago, echoing the wealthy and the privileged’s fear of the ’great unwashed’ when ‘over-population’ was the buzzword. So not much has changed has it, we’re hearing the same, tired old messages being rolled out once again by the ruling elites and their spin doctors. McNamara’s cries of fear about being up to his neck in Mexicans is exactly same as the current bogey doing the rounds in Europe, only now they’re Africans.

Thus the current explosions in Haiti, Eygpt, Ivory Coast, Ethiopia, the Philippines, Indonesia and elsewhere over the rocketing price of basic foodstuffs such as cooking oil and rice prompted the BBC to describe them as first and foremost “a potential threat to Western security” (BBC News 24, 13 April, 2008), never mind the threat to human life, but then it reveals exactly where the BBC’s head is at, protecting the status quo.

To add insult to injury, the crétin Gordon Brown has the damn nerve to say,

“Rising food prices threaten to roll back progress we have made in recent years on development. For the first time in decades, the number of people facing hunger is growing.”

Progress? What planet does our glorious leader live on? Standards of living have been falling for everybody (except the rich who, as a consequence, have just gotten even richer by stealing even more from the poor), since the 1970s when the ‘neo-liberal’ agenda was initiated and not only have the poorest been the hardest hit but we’ve seen millions of the formerly ‘middle classes’ dumped unceremoniously back where they ‘belong’, with the poor. Social status doesn’t put food on the table. So much for the capitalist ‘good life’.

These are the facts: real wages in the US have fallen since the 1970s. It’s reckoned that around 40 million Americans now live under the ‘official’ poverty level, but at least they can still eat something, not so the millions of people in the so-called developing world who already immiserated by so-called free trade, have been hit with a double whammy, nay, a quintuple whammy.

The poor countries of the world have been ‘persuaded’ that growing food for export so as to earn foreign currency which they then have to use to buy imported food (guess where from?), is better than growing food in their back yard. And to make sure they live up to their end of the ‘bargain’, under WTO ‘rules’ they get punished if they try to control imports.

Countries grew their own food which not only fed them but also created employment, now grow food and things like flowers, for export in order to ‘earn’ the precious dollar which obviously they have to spend on importing the food they once grew. Worse, the subsidized food imports wipe out what remains of indigenous agriculture, it simply can’t compete. What an insane setup! It only makes sense when you realize that the managers who setup this ‘deal’ work for BIg Business, they call the shots. If it were a ‘Mafia’ deal it would be called criminal extortion.

Of course, we in the West with our wealth subsidize the production of food, so the poor of the planet get hit with a whammy within a whammy. Not having the resources to subsidize their own food production, as the cost of importing food rises but not the price they get for exporting food to us, they are truly caught between a rock and a barren place.

And it’s the same IMF and World Bank policies which created the latest crisis to hit the poor of our planet, that are responsible for creating such an unequal relationship in the first place.

And of course to grow all these crops for export needs lots of energy and lots of water, and lots of fertilizer, and lots of pesticides, all of which must be bought with precious foreign currency (and until recently, only dollars would be accepted). With oil now selling at over $113 a barrel, the cost of producing anything has shot through the roof. The winners: The Big Oil Cartels. No need to tell you who the losers are.

But the actual cost of producing the oil hasn’t risen much at all, the entire responsibility for these increases has to be placed where it belongs, on the commodities speculators and the Big Five oilcos. In other words, on all those grimy gamblers in investment corps and pension fund managers. It’s the system.

The latest addition to the armoury of food used as a weapon and perhaps the most obvious example to date, is converting production from food staples to so-called bio-fuels.

For rather than us just using less energy, we buy it from the poor of the planet in the form of ‘bio-fuels’. Brilliant isn’t it. What poor country needs to produce ethanol? It has no possible use except perhaps to make moonshine.

And in any case, as a leaked EU report shows, bio-fuels do nothing to halt the production of greenhouse gases (they may even increase it), the entire ‘bio-fuels’ thing is one gigantic scam, largely to do with what is the most profitable crop to grow (see ‘Industry asks for biofuels policy U-turn).

Read all of it here. / Creative-i

Thanks to Susan Majesta / The Rag Blog