The Decision to Torture : It Started at the Top 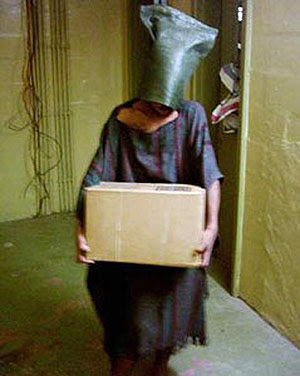 Forget impeachment for the practical reason that the Democrats in Congress are unwilling to pursue it for tactical reasons. Therefore, it will not happen. Besides, mere impeachment is completely inadequate. In a just world, Bush and his cronies would deserve nothing less than very long prison terms. They are obviously guilty of both torture and waging aggressive war, the crime for which Nazi leaders were hung at Nuremberg.

If the advocates of impeachment started clamoring for the indictment of the whole Bush regime leadership at the International Criminal Court on war crimes charges, there would be no November deadline and much of the world would rally to that effort. Transcend the national perspective. Although it is doubtful that such charges, easily proven, would result in their actual incarceration, the international condemnation and their being unable to travel outside the US would be a historic precedent.

The following is the lead editorial in today’s New York Times.

Ever since Americans learned that American soldiers and intelligence agents were torturing prisoners, there has been a disturbing question: How high up did the decision go to ignore United States law, international treaties, the Geneva Conventions and basic morality?

The answer, we have learned recently, is that — with President Bush’s clear knowledge and support — some of the very highest officials in the land not only approved the abuse of prisoners, but participated in the detailed planning of harsh interrogations and helped to create a legal structure to shield from justice those who followed the orders.

We have long known that the Justice Department tortured the law to give its Orwellian blessing to torturing people, and that Defense Secretary Donald Rumsfeld approved a list of ways to abuse prisoners. But recent accounts by ABC News and The Associated Press said that all of the president’s top national security advisers at the time participated in creating the interrogation policy: Vice President Dick Cheney; Mr. Rumsfeld; Condoleezza Rice, the national security adviser; Colin Powell, the secretary of state; John Ashcroft, the attorney general; and George Tenet, the director of central intelligence.

These officials did not have the time or the foresight to plan for the aftermath of the invasion of Iraq or the tenacity to complete the hunt for Osama bin Laden. But they managed to squeeze in dozens of meetings in the White House Situation Room to organize and give legal cover to prisoner abuse, including brutal methods that civilized nations consider to be torture.

Mr. Bush told ABC News this month that he knew of these meetings and approved of the result.

Those who have followed the story of the administration’s policies on prisoners may not be shocked. We have read the memos from the Justice Department redefining torture, claiming that Mr. Bush did not have to follow the law, and offering a blueprint for avoiding criminal liability for abusing prisoners.

The amount of time and energy devoted to this furtive exercise at the very highest levels of the government reminded us how little Americans know, in fact, about the ways Mr. Bush and his team undermined, subverted and broke the law in the name of saving the American way of life.

We have questions to ask, in particular, about the involvement of Ms. Rice, who has managed to escape blame for the catastrophic decisions made while she was Mr. Bush’s national security adviser, and Mr. Powell, a career Army officer who should know that torture has little value as an interrogation method and puts captured Americans at much greater risk. Did they raise objections or warn of the disastrous effect on America’s standing in the world? Did anyone?

Mr. Bush has sidestepped or quashed every attempt to uncover the breadth and depth of his sordid actions. Congress is likely to endorse a cover-up of the extent of the illegal wiretapping he authorized after 9/11, and we are still waiting, with diminishing hopes, for a long-promised report on what the Bush team really knew before the Iraq invasion about those absent weapons of mass destruction — as opposed to what it proclaimed.

At this point it seems that getting answers will have to wait, at least, for a new Congress and a new president. Ideally, there would be both truth and accountability. At the very minimum the public needs the full truth.

Some will call this a backward-looking distraction, but only by fully understanding what Mr. Bush has done over eight years to distort the rule of law and violate civil liberties and human rights can Americans ever hope to repair the damage and ensure it does not happen again.