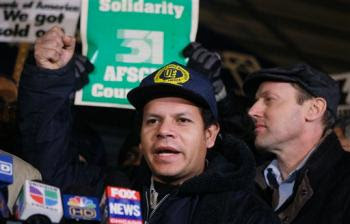 United Electrical Union Workers Local President Armando Robles, left, and U.E. Western Regional President Carl Rosen address the media about negotiations with Bank of America and Republic Windows and Doors on the fourth day of a sit-in at the companies factory Monday, Dec. 8, 2008 in Chicago. Photo by M. Spencer Green / AP.
‘They refused to walk away from their jobs quietly or to accept the argument that the lay-offs were an inevitable result of the nation’s economic hard times.’
By Peter Dreier / December 9, 2008

Since Friday, 240 members of the United Electrical, Radio and Machine Workers of America (UE), a small but feisty union that has always been in the progressive wing of the labor movement, have displayed uncommon courage. They have illegally occupied their Chicago factory after their employer abruptly told them that it was shutting down the plant.

Equally impressive, President-elect Barack Obama, by quickly endorsing the workers’ protest, showed the kind of bold leadership that progressives have been hoping for, but didn’t expect to see so soon. Indeed, Obama’s statement puts him ahead of Franklin Roosevelt, who didn’t embrace worried workers’ escalating demands until after his inauguration in March 1933, when a quarter of the workforce was unemployed.

The workers began their sit-in on Friday, after their employer, Republic Windows and Doors, closed the factory with only three days notice. The company management told the workers and their union, UE Local 1110, that the Bank of America had canceled Republic’s line of credit, making it impossible to stay in business — or even pay employees the severance and vacation pay they’d earned. The company immediately terminated the workers’ health insurance.

The BofA said that the cancellation was routine business practice, caused by Republic’s cash flow problem in the wake of declining sales in the nation’s housing construction downturn.

“When a company faces such a dire situation, its lender is not empowered to direct the company’s management how to manage its affairs and what obligations should be paid,” declared the North Carolina-based BofA in a statement. “Such decisions belong to the management and owners of the company.”

The BofA’s antiseptic statement reflected the kind of cold-blooded market fundamentalism that has led a growing number of Americans to demand more government regulation of big business.

But the Republic workers didn’t wait for government action. They refused to walk away from their jobs quietly or to accept the argument that the lay-offs were an inevitable result of the nation’s economic hard times. They peacefully took over the plant, where some of them had worked for decades, and demanded that the Bank of America and Republic management find a solution. The workers insist that they won’t leave until getting assurances they will receive severance and vacation pay, but they also hope to find a way to keep the plant open.

Although by occupying the factory they are breaking the law, no politician has called for the Chicago Police Department to arrest them — a sure sign that their action has become a symbol of working families’ distress in the unraveling Bush economy. Millions of Americans, watching interviews with the workers on TV during the past few days, can identify with their plight – the loss of their jobs, their health insurance and perhaps their homes – only a few weeks before Christmas.

The sit-in began the same day that President Bush reluctantly acknowledged, for the first time, that the country was in a recession. He released a Department of Labor report revealing that U.S. employers axed 533,000 jobs in November, the biggest monthly cut since 1974. As a result, the official unemployment rate has jumped to 6.7 percent. Now in its twelfth month, the recession is already the longest since a 16-month slump in 1981-82. Some economists predict that this downturn will set a new post-World War 2 record.

“When it comes to the situation here in Chicago with the workers who are asking for their benefits and payments they have earned,” Obama said during a press briefing on Sunday, ” I think they are absolutely right. What’s happening to them is reflective of what’s happening across this economy.”

With that statement, Obama used his bully pulpit to endorse the workers’ protest and to put pressure on the Bank of America and Republic to forge a solution. Representatives of the company, BofA, and the union have been meeting at the bank’s office in downtown Chicago. Congressman Luis Gutierrez has been moderating the talks.

The symbolism of the workers’ take-over also adds credence to Obama’s call for a major government-funded infrastructure program that will stimulate several million jobs — almost all of them in the private sector — and help jump-start the ailing economy.

“The workers want Bank of America to keep the plant open and the workers employed,” said UE President Carl Rosen. “There is always a demand for windows and doors. But with Barack Obama’s stimulus proposal, there will be even greater demand for the products made by Republic’s workers. It doesn’t make sense to close this plant when the need is so obvious.”

“We were cutting out glass for an order for 1,000 new windows last week,” 34 year-old Vicente Rangel, a Republic employee for 15 years, told the Los Angeles Times. “There was work to do. Then, the bosses called us to a meeting and said everyone was quitting, whether they wanted to or not.” The union workers earned an average of $14 an hour, and received health insurance and retirement benefits as part of their union contract.

“I’m not scared because I’m not alone on this,” said Raul Flores, according to the Chicago Tribune. The 25-year old Flores, who had worked at Republic for eight years, added, “We’re strong and we’re going to stay. This gives us the strength to keep going. This is going to be for everyone.”

Americans have rallied to the Republic workers’ cause. They’ve sent money, food, clothing, blankets, and good wishes. (To donate, go here). On Monday, protesters picketed a Bank of America branch on Chicago’s West Side, explaining that they support the workers’ sit-in. A coalition of unions and community groups, Jobs with Justice, held a rally at Chicago City Hall and threatened to organize a boycott of the Bank of America if the problem isn’t resolved.

Union members, politicians, and others have highlighted the irony that Bank of America just got $25 billion of the federal government’s bank bail-out funds, designed to push banks to start lending money again. BofA’s refusal to extend Republic further credit seems cold-blooded and hypocritical.

The bank’s hypocrisy hasn’t been lost on elected officials. Illinois Gov. Rod Blagojevich threatened to suspend all state government business dealings with BofA if a reasonable solution is not achieved quickly. He asked the state Department of Labor to investigate if Republic had violated Illinois’ plant closure laws. The company may also have violated the federal Worker Adjustment and Retraining Notification Act, a 1988 law that requires employers to provide employees and community 60 days notice in advance of plant closings and large-scale layoffs.

After U.S. Senator Dick Durbin (D-Ill.) visited the plant, he expressed support for the workers, observing, “The taxpayer dollars going into these big banks are not for dividends, they’re not for executive salaries,” according to the Chicago Tribune (which, ironically, just declared bankruptcy). “They’re for loans and credit to businesses just like Republic so they can stay in business and so these workers won’t be out on the street unemployed.”

Chicago aldermen have called for hearings on Republic, which received over $10 million in city redevelopment funds. They and Cook County officials suggested withdrawing hundreds of millions of dollars of government funds from the Bank of America.

“We never expected this,” Melvin Maclin, a factory employee and vice-president of the UE local, told the Associated Press about the support they’ve received. “We expected to go to jail.”

Inside the factory’s lobby, local residents and workers covered the walls with hand-scrawled signs, according to the Los Angeles Times.

“Thank you for showing us all how to fight back!” wrote one person. “Here’s to change, from the bottom up,” penned another.

These sentiments will sound familiar to anyone who followed Obama on the presidential campaign trail. “Change comes from the bottom up,” the former community organizer said frequently during his stump speeches.

During the past two weeks, as Obama appointed moderates and former Clintonites to high-level positions in his economic brain-trust, some progressives worried that the president-elect was already moving to the center, even as the economy nosedived. But Obama’s call for the largest public investment plan since the interstate highway program begun in the 1950s, his support for a major federal loan to the Big 3 auto companies if they retool to become more energy-efficient, and now his embrace of the Republic workers’ occupation of their factory has given many progressives assurance that Obama hasn’t forgotten his liberal instincts.

Its worth recalling that FDR did not campaign for president in 1932 — three years into the Great Depression — as a proponent of government activism or with a clear plan for economic recovery. But in the five months between his election victory and his March 1933 inauguration, Depression conditions had worsened, and grassroots worker and community protests escalated throughout the country. As soon as he took office, Roosevelt became more vocal, using his bully pulpit — in speeches and radio addresses — to promote New Deal ideas, pushing banking reform, public works, relief for struggling farmers, and help for homeowners within the first few months of his administration. In June 1933 he signed the National Industrial Recovery Act (NIRA), which for the first time recognized workers’ right to collective bargaining.

Immediately, union activists gave speeches and posted signs — on posters and billboards, and in store windows — proclaiming, “The President wants you to join the union.” Workers responded, and union membership began to climb. When the Supreme Court ruled in May 1935 that NIRA was unconstitutional, FDR and Congress immediately enacted the National Labor Relations Act, often called the Wagner Act, to preserve workers’ right to organize. Workers became even bolder in order to protect their jobs and defend their rights. Department store clerks, bakers, hospital laundry workers, longshoremen, meatpackers, steelworkers, tire and auto workers, and others engaged in various forms of protest, including the first wave of “sit-down” strikes demanding recognition of their unions. The combination of government intervention and union activism laid the foundation for the post-World War 2 prosperity that lifted the majority of Americans into the middle class.

That social contract has now been shredded, spurred by two decades of government deregulation of business, widening inequality, increasing job insecurity, and the unraveling of the social safety net, including health insurance. These trends have been compounded during the Bush years — corrupt crony capitalism, the mortgage meltdown, escalating foreclosures, and large-scale lay-offs.

The bold factory take-over by the Republic workers in Chicago may be a fluke, or it just could be the opening salvo of a new wave of grassroots activism, not only by workers and their unions, but also by community groups, enviros, religious congregations, housing crusaders, and the millions of Americans inspired by Obama’s campaign who voted for the first time in November. Clearly the Republic workers’ protest has struck a nerve with the American people, including many who don’t share their plight but can nevertheless empathize with their predicament.

It would be uplifting and useful to see vigils and rallies in cities around the country on behalf of another New Deal — a pump-priming infrastructure plan, a “green jobs” investment program, a universal health insurance proposal, a long-overdue reform of corporate-friendly labor laws, a strategy to help Americans afford housing, and a significant federal investment in public schools and college financial aid.

Like FDR, Obama can use his bully pulpit to encourage Americans to organize and raise their voices – as he did Sunday in support of the workers at Republic Windows and Doors, a month before he officially takes office. But if Americans want the country to change direction, as the election results indicated, they’ll have to follow Obama’s advice, and the Republic workers’ example: change happens from the bottom up.