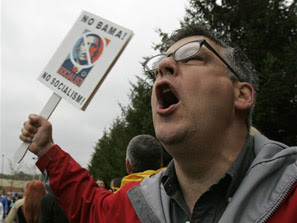 A McCain supporter yells at Obama supporters before McCain and Palin arrive at a rally, Oct. 8, 2008, in Strongsville, Ohio. Photo by AP.
McCain campaign riling up base by ‘ratcheting up fears and frustrations.’
By Jonathan Martin / October 10, 2008

The unmistakable momentum behind Barack Obama’s campaign, combined with worry that John McCain is not doing enough to stop it, is ratcheting up fears and frustrations among conservatives.

And nowhere is this emotion on plainer display than at Republican rallies, where voters this week have shouted out insults at the mention of Obama, pleaded with McCain to get more aggressive with the Democrat and generally demonstrated the sort of visceral anger and unease that reflects a party on the precipice of panic.

The calendar is closing and the polls, at least right now, are not.

With McCain passing up the opportunity to level any tough personal shots in his first two debates and the very real prospect of an Obama presidency setting in, the sort of hard-core partisan activists who turn out for campaign events are venting in unusually personal terms.

“Terrorist!” one man screamed Monday at a New Mexico rally after McCain voiced the campaign’s new rhetorical staple aimed at raising doubts about the Illinois senator: “Who is the real Barack Obama?”

“He’s a damn liar!” yelled a woman Wednesday in Pennsylvania. “Get him. He’s bad for our country.”

At both stops, there were cries of, “Nobama,” picking up on a phrase that has appeared on yard signs, T-shirts and bumper stickers.

And Thursday, at a campaign town hall in Wisconsin, one Republican brought the crowd to its feet when he used his turn at the microphone to offer a soliloquy so impassioned it made the network news and earned extended play on Rush Limbaugh’s program.

“I’m mad; I’m really mad!” the voter bellowed. “And what’s going to surprise ya, is it’s not the economy — it’s the socialists taking over our country.”

After the crowd settled down he was back at it. “When you have an Obama, Pelosi and the rest of the hooligans up there gonna run this country, we gotta have our head examined!”

Such contempt for Democrats is, of course, nothing new from conservative activists. But in 2000 and 2004, the Republican rank and file was more apt to ridicule Gore as a stiff fabulist or Kerry as an effete weather vane of a politician.

“Flip-flop, flip-flop,” went the cry at Republican rallies four years ago, often with footwear to match the chant.

Now, though, the emotion on display is unadulterated anger rather than mocking.

Activists outside rallies openly talk about Obama as a terrorist, citing his name and purported ties to Islam in the fashion of the viral e-mails that have rocketed around the Internet for over a year now.

Some of this activity is finding its way into the events, too.

On Thursday, as one man in the audience asked a question about Obama’s associations, the crowd erupted in name-calling.

“Obama Osama!” one woman called out.

And twice this week, local officials have warmed up the crowd by railing against “Barack Hussein Obama.”

Both times, McCain’s campaign has issued statements disavowing the use of the Democrat’s full name.
A McCain aide said they tell individuals speaking before every event not to do so. “Sometimes people just do what they want,” explained the aide.

The raw emotions worry some in the party who believe the broader swath of swing voters are far more focused on their dwindling retirement accounts than on Obama’s background and associations and will be turned off by footage of the McCain events.

“People need to understand, for moral reasons and the protection of our civil society, the differences with Sen. Obama are ideological, based on clear differences on policy and a lack of experience compared to Sen. McCain,” Weaver said. “And from a purely practical political vantage point, please find me a swing voter, an undecided independent, or a torn female voter that finds an angry mob mentality attractive.”

“Sen. Obama is a classic liberal with an outdated economic agenda. We should take that agenda on in a robust manner. As a party we should not and must not stand by as the small amount of haters in our society question whether he is as American as the rest of us. Shame on them and shame on us if we allow this to take hold.”

But, if it were up to them, such hard-edged tactics are clearly what many in the party base would like to use against Obama.

That McCain has so far seemed reluctant to do so has frustrated Republicans.

“It’s time that you two are representing us, and we are mad,” reiterated the boisterous Republican at McCain’s town hall in Wisconsin Thursday. “So go get ’em!”

“I am begging you, sir, I am begging you — take it to him,” pleaded James T. Harris, a local talk radio host at the same event, earning an extended standing ovation.

“Yosemite Sam is having the law laid down to him today in Waukesha, Wis.,” quipped Limbaugh on his show Thursday, referring to the GOP nominee. “This guy, this audience member, is exactly right,” the conservative talk show host said of the first individual.

“McCain has always frustrated the Republican base,” Pitney said. “In this campaign, he has alternated between partisan attacks and calls for bipartisan cooperation. It’s nice that he thinks he can round up congressional votes the way a border collie rounds up sheep. But you can’t be a border collie and a pit bull at the same time. The crowds want a pit bull.”

There is also the belief that taking out Obama is the only way to win.

“They know that when McCain has taken off the Senate mantle and put the stick to Obama (celebrity ad, as a case in point), we get movement in the polls,” said Rick Wilson, a GOP consultant not working on the presidential race. “They want McCain to call out Obama — on the Fannie/Freddie mess, on Wright, on Ayers, on guns, on [the Association of Community Organizations for Reform Now] — because they know that if McCain says it, it penetrates the MSM filter. … Only McCain and Palin can really drive that message.”

The two have begun to get more aggressive on many of these topics, with both discussing Ayers in multiple venues Thursday. The RNC is also going up for the first time with an ad featuring the former domestic terrorist.

It was enough to stir hope that McCain may stay on the offensive, even in Limbaugh, who has often criticized the Arizona senator for working with Democrats more than attacking them. The radio host praised his sometimes-nemesis for singling out Rep. Barney Frank (D-Mass.) and Sen. Chris Dodd (D-Conn.) as partly responsible for the credit crisis.

“McCain/Palin fired back today in Waukesha, and 15 years of frustration is coming out joyously in the voices of GOP supporters at these rallies,” Limbaugh wrote in an e-mail, arguing that Republicans were fed up with having been portrayed as the bogeyman for myriad issues since the Clinton years.

But to the exasperation of many in the party, Obama’s pastor, the most damning of all his associations, remains off-limits, at the express desire of McCain. Palin ignored Wright and focused on Ayers when she was asked about the two in an interview Thursday with conservative talk show host Laura Ingraham. And McCain focused on Ayers only when he was asked an open-ended question at the town hall about Obama’s “associations.”

“It is a shame McCain took Wright off the table,” lamented one prominent Republican operative not working on the race. “He is a legitimate issue, and we may look back and realize he was the issue that could have changed the race.”

For now, though, party members don’t seem to be looking back with regret as much as fearing what lies ahead.

“McCain is behind in the polls, and the Republicans have no chance of regaining control of Congress,” Pitney noted. “Republicans are facing the prospect of unified Democratic control of the government for the first time since the first two Clinton years. And even then, Clinton’s agenda had moderate elements (e.g., [the North American Free Trade Agreement] and deficit reduction). With Obama, [Senate Majority Leader Harry] Reid and [House Speaker Nancy] Pelosi in power, Republicans worry about a hard push for a hard-left agenda.”