Coal: Not Quite As Dirty Once You Burn It 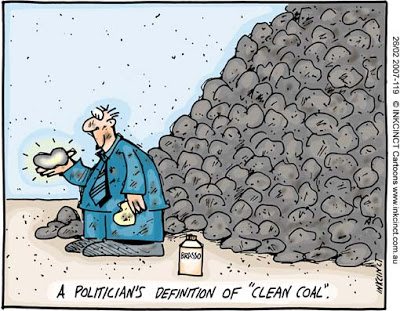 A look at whether “clean coal” is actually clean, how the technology works, and whether it is a climate crisis cure.

Both Presidential Candidates Obama and McCain have emphasized the need for Energy Reform as we face climate change, a sinking economy, and rising fuel costs. In a country where 85% of energy demands are from fossil fuels (oil, coal and gas), coal and “clean coal” are making a rhetoric comeback this election. However, the burning of coal has proven one of the leading human-based causes of global climate change due to resulting carbon dioxide emissions, let alone a diversity of air pollutants.

The Obama Energy Plan proposes to “develop and deploy clean coal technology.” McCain’s energy plan, “The Lexington Project,” commits to “$2 billion annually to advancing clean coal technologies.” As the candidates talk about “clean coal,” alternative energy, and energy independence, what’s the science behind the plans? In this article we’ll look into one of the more environmentally controversial options that has been put forth by the two candidates and try to help you decide how much of our nation’s energy plan we wanted devoted to “clean coal”.

Coal and its byproducts are everywhere — in plastics, tar, fertilizer, steel and as the energy source for major industries such as paper and cement. In the U.S., however, over 90% of coal is used for electricity generation, resulting in 83% of carbon dioxide emission from the power sector. Coal is burned in power plants to create steam, thereby powering turbines and generating both electricity and a diversity of harmful air pollutants. No matter how you look at it, there isn’t much clean about coal. The extraction and burning of coal is considered the dirtiest of all fossil fuels, including oil and gas. So, what is this new, innovative and so-called “clean coal”?

Unfortunately, no one has discovered a new form of coal — the black rock composed of carbon or hydrocarbons that is intensively mined throughout the world. The dangerous misnomers “clean coal” or “clean coal technology” are not about finding a cleaner form of fuel, instead they describe the reduction of air pollution from coal-burning power plants. For instance, some “clean coal technology” works to boost power plant efficiency in converting coal to energy, others physically filter emissions before release, and others are being developed to capture emissions upon release from the plants.

With each of these much less-than-perfect technologies, there’s a diversity of research and development, money and time, and effectiveness in curbing coal’s environmental and health impacts. Below you will find a sampling of “clean coal technologies” and some insights into their pros and cons: 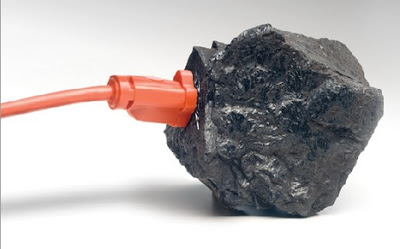 Cleaning up the power plants: Scrubber and Increased Efficiency: Since the 80’s, the U.S. Department of Energy (DOE) has been working to decrease particulate emissions, mercury, sulfur and nitrogen from coal-burning plants — all materials that contribute greatly to air and water pollution. “Scrubbers” are brushes and filters that are installed in smoke flues of coal-burning facilities, which physically remove some emissions’ components. The reduction of these emissions has shown some success due to increased scrubber technology, where smoke stacks have increased cleaning or screening mechanisms on them, and some other “clean coal technology” methods. Unfortunately, greenhouse gases such as carbon dioxide have proven to be more difficult, energy and cost intensive to reduce at the source.

Gasification: Integrated gasification combined cycle or IGCC gets to the coal before it’s burned. According to the DOE, the process uses steam and hot pressurized air or oxygen to force coal particles apart, thereby resulting in carbon monoxide and hydrogen. This mix is cleaned and burned to make electricity with subsequent heat being used for powering steam turbines. Some good things about IGCC are that there is a biproduct of hydrogen that can be used in developing hydrogen fuel cells. Additionally, the process of gasification can also be used for biomass and other “renewables” technology. Alternatively, gasification technology is still quite expensive and not considered economically viable on mass scales.

Carbon sequestration or Carbon Capture and Storage (CCS): The basics of CCS are to capture carbon out of the air and to put it somewhere else. The methodology behind, and storage sites, vary and include underground storage, ocean storage, creating carbonate rock out of the carbon dioxide and others.

In a 2008 interview with Klaus Lackner, Columbia University Ewing-Worzel Professor of Geophysics and one of the foremost CCS scientists remarked, “The challenge is capture, not storage.” He continued, “Our goal is to take a process that takes 100,000 years and compress it into 30 minutes.” One of the good things about CCS is that it can help clean up the mess that we’ve gotten ourselves into in terms of carbon emissions already in the air. Many do question the long-term effectiveness and safety of storing this carbon in systems that aren’t used to having it there. Furthermore, although leaps and bounds have been made in past years in capturing CO2 from the air, the process is still costly and many estimate that the technology will not be ready for large-scale capture for many years to come.

With goals of zero-emissions coal power plants, the U.S. has spent over $2.5 billion since 2001 in research and development for “clean coal technology.” Unfortunately, none of the options on the table actually help coal–as a whole–become any cleaner. A misnomer at best, “clean coal technology” is key to the cleanup of existing coal-powered facilities, but it’s a long shot from the clean energy bill of health. There are some promising technologies being tested and applied within the “clean coal technology” umbrella, such as those addressing “end of the pipe” issues with the burning of the most abundant of fossil fuels.

However, few address the issues of coal extraction and its’ environmental and health impacts and none are currently viable at a mass scale. Perhaps if the Presidential Candidates start referring to it as “not quite as dirty once you burn it coal technology,” voters would have a better idea of what to expect in the upcoming new energy plans.