The John McCain Mysteries : POW Questions and the Forrestal Affair 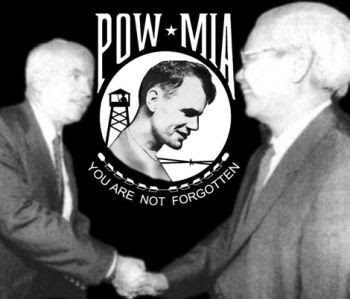 This is the sixth and final installment in a series by Rag Blog contributor Sherman De Brosse, a retired history professor, on John McCain, his shady involvements, past and present, and his wrong-headed and ill-informed political positions.

John McCain has repeatedly said that his life is an open book, but a close examination reveals that this is not the case. One of the most puzzling aspects of his long career is that he has repeatedly been the point man in an effort to prevent the friends and families of Vietnam War MIAs from learning what happened to their loved ones. It makes no sense as McCain is the most famous of the Vietnam War POWs.

When the French were forced out of Indochina, the Communist Vietnamese required that they pay for the return of their prisoners. The North Vietnamese planned to do the same with the United States. They released John McCain and 590 others in January, 1973, and told the United States it would have to pay for the rest. General Tran Van Quang placed the number of the remaining prisoners at 1,205. On February 1, 1973, President Richard Nixon wrote to the North Vietnamese premier, promising $3.25 billion for “postwar reconstruction.” The United States never paid the ransom. Later, in 1981, the North Vietnamese, through a third party, offered to return our personnel — now MIAs — for $4 billion. Richard Allen, Reagan’s national security advisor, told Congress about the offer. Treasury agent John Syphrit said he was present when the offer was discussed.

Two Secretaries of Defense, Mel Laird and Richard Schlesinger, have told Congress that American personnel are still in Vietnam. The evidence of this is based upon eyewitness sightings, radio messages, and the prisoners triggering motion sensors in a manner they had been taught to indicate their presence. The servicemen had been taught to enter into the sensors twenty different authentication numbers.

In 1992, Dolores Alford, sister of a missing airman, appeared before the Select Committee on POW/MIA Affairs. She raised questions about her brother and the others and asked about the sensor evidence. The committee was chaired by Senator John Kerry, but John McCain was its dominant force due to his celebrity and background as a POW. With his face turned pink in rage, McCain took some time yelling and berating the woman and ranting about Ms. Alford “denigrating” his “patriotism.” He shouted and shook his fist at witnesses, reducing one to tears. The Committee put out a report that essentially covered up what was going on, but buried deep in it the staff wrote that the people who analyze satellite and low altitude photographs had never been told about the various distress signals that had been received. Pulitzer Prize-winning journalist Sydney H. Schanberg thinks that most of the prisoners have died or have been executed but he believes that some remain in Vietnam.

McCain was also busy sabotaging legislation that would help people learn what had happened to their loved ones. In 1990 and 1991, he handicapped the Truth bill. Then he passed his own version that had all sorts of Catch 22 mechanisms to get in the way of researchers. In 1995 and 1996 he attached crippling amendments to the Missing Service Personnel Act.

John McCain has constantly ridiculed the POW activists, referring to the “bizarre rantings of the MIA hobbyists,” and calling them “hoaxers” and “charlatans.” Then he demanded that the Justice Department investigate some of the people who opposed him on this issue. St. John Mc Cain told reporters:

The people who have done these things are not zealots in a good cause. They are the most craven, most cynical and most despicable human beings to ever run a scam.

The Justice Department did his bidding and probed two organizations, but did not find evidence of a scam. McCain heaped scorn on H. Ross Perot, whose concern about the POW/MIAs was certainly sincere and well-informed. Navy Captain and fellow POW Eugene “Red” McDaniel was also attacked by the Arizonan as a fraud.

In 1996, a group of MIA advocates asked to speak with him outside a committee hearing room. He erupted in anger and shoved them aside. They included Jane Duke Gaylor, a woman in a wheelchair who was the mother of a missing POW.

His conduct in respect to POW issues simply defies reason, and his angry outbursts suggest he lacks the temperament to be Commander in Chief.

His strange and irrational conduct in respect to the POW issue needs to be explained. Some of the former Swift Boaters are now actively involved in Vietnam Veterans against John McCain. They have leveled all sorts of charges against the man, but the mainstream media refuses to acknowledge their presence or even look into what they have to say.

They are clearly correct on the POW/MIA issue. They claim that McCain cooperated with the enemy too much while a prisoner of war. It is suggested that his conduct in Hanoi is being held over his head to induce him to frustrate the POW/MIA advocates. No one has ever seen a nonredacted copy of McCain’s post-Hanoi debriefing and the Pentagon refuses to release copies of his confessions. It is an unpleasant subject amd anyone would be disinclined to blame him for almost anything he said under torturous conditions.

A few of the things he has said about his captivity do not add up. John LeBoutillier is on solid ground when he notes that McCain’s story about the guard making the sign of the cross in the dirt was probably borrowed from Admiral Jeremiah Denton, another POW/Senator.

There is ample evidence that Soviet (KGB &GRU) and Cuban psychiatrists interrogated POWs in Hanoi, yet McCain insists that it never happened. Some former prisoners spoke about interrogators from North Korea, whose programs for turning prisoners were very successful. It is documented that McCain was interviewed by Spanish psychiatrist Fernando Barral in 1970. North Vietnamese Colonel Bui Tin told a Senate committee in 1992 that Soviet officers interrogated prisoners on a daily basis. Why would McCain deny the presence of non-Vietnamese interrogators and also hug the Vietnamese Colonel Bui Tin as though he were a long lost brother. Bui Tin, who had been a North Vietnamese interrogator. One cannot help wondering about the Stockholm Syndrome.

By his own 1973 US News and World Report account, he thought many of the prisoners had been drugged. Of course, the North Vietnamese could have done this, as drugging and interrogations have long gone hand and hand. McCain’s account includes the claim of being tortured daily, but his two senior officers have said they do not believe he was tortured. Some, including fellow prisoners, say his injuries were the result of the plane crash.

Oddly, he embraced the Vietnamese , Mai Van On, in 1997, who pulled him out of his plane and assisted him, but refused further contact after that meeting in Vietnam. By most accounts, he has become Vietnam’s best friend in the US Senate.

Some suggest that McCain could be blackmailed with information substantiating charges that he was responsible for the terrible accident on the USS Forrestal in the Gulf of Tonkin on July 29, 1967, when 132 lives were lost. The incident is called the “Forrestfire.” Forrestal survivors angrily confronted him in South Carolina in 2000. It is said that Lt. Commander John McCain “wet started” his A-4E, which set off a chain reaction. Wet-starting was forbidden but considered sort of a joke prank among some pilots. It involved feeding fuel before starting the plane, resulting in more than 12 feet of flames coming out of his plane’s tail that day.

The object was to alarm the pilot in the plane behind you. It is claimed that the flame triggered a 6 foot Zuni rocket from an F-4 ahead of Mc Cain to crash into the plane next to Mc Cain’s A-4 fuel tank. Fortunately, he had much practice getting out of planes in a hurry. Then one of his bombs “booked off” and blew a hole in the deck. This is the version of his critics, and many on the Forrestal believed it. That is why McCain was evacuated with the badly wounded.

Some flyers showed great valor and lost their lives fighting the fire. McCain went below but briefly helped sailors off load some bombs from an elevator. He went to the ready room to watch others fight the fire via closed-circuit TV. In his memoirs, he said he was down there worrying about his flying career. The next morning, McCain was evacuated along with the reporter who came aboard to report on the fire. He was the only uninjured Naval person to be evacuated. As his shipmates mourned the lost, he went off to Saigon for R&R.

The official story simply does not mention McCain or his plane, number 416. This author has studied the tapes repeatedly and thinks that the critics are probably dealing the senator a bad rap. The trouble is that the official film footage was not focused on McCain’s plane when the accident began to happen.

It is puzzling why his shipmates disliked him so and blamed him. Some point out that few Naval aviators from his time have endorsed McCain’s quest for the presidency. That might be because he was more serious about partying than being a pilot and because command influence was used in his favor so often. He had been passed over for promotion twice before this incident. The main reason for withholding promotions is belief that the candidate lacks maturity. Of course, he was promoted as a matter of policy after he became a POW.

There are other aspects of McCain’s life that leave up partly in the dark. We know precious little about his mob ties — just enough to worry. The press dropped the Paxon Communications story like a hot potato, and it looks like all his ties with cable and communications people need examination. Much more needs to be known about his gambling habits because this reflects judgment, and his personal ties to people in the gambling industry are important because they could bear on ethics. Even his health status is shrouded as only select reporters were permitted to peruse, and take no notes, on select records for a limited period of time.

With all these questions in mind, all we really have is the image he has carefully constructed and the obvious fact that he seems given to rash decisions and frightening outburst of anger. Just the kind of person we need in the presidency!

And see other Rag Blog articles by Sherman DeBrosse on John McCain and Sarah Palin.

1 Response to The John McCain Mysteries : POW Questions and the Forrestal Affair