Lamar W. Hankins : What Happened to ‘Government for the People’? 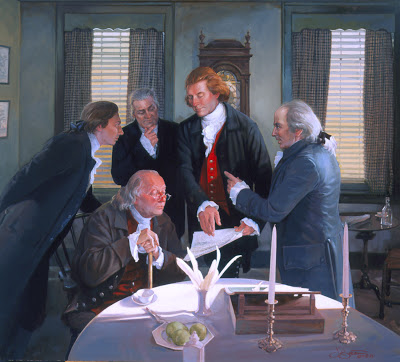 Do we still hold these truths to be self-evident? Image from Greenwich Workshop.

Why Republicans (and many Democrats)

don’t believe in government for the people

“I promise you this. I’ll work every day to try to make Washington, D.C., as inconsequential in your life as I can.” — Rick Perry, Candidate for the Republican nomination for president

For the most part, these politicians — all members of what I will call the Finance Party — don’t like the fact that governments are created by people (for now, I will ignore the misogyny implicit in the word “men”) to secure the basic rights of equality and a multitude of other rights — life, liberty, and the pursuit of happiness — which were further explained and expanded in the Constitution’s Bill of Rights.

Governance — the task given to our elected representatives — is all about balancing the social contract and the rights we have so that one group cannot dominate another, a view anathema to the members of the Finance Party, who are perfectly happy

I could go on, but I hope readers get the idea. The signers of the Declaration believed that laws should be adopted that are “most wholesome and necessary for the public good.” This is virtual heresy to most members of the Finance Party. Republicans in particular, along with a substantial number of Democrats, do not want laws that are for the public good. They want laws that benefit the corporations and the wealthy, particularly those that contribute to their political campaigns.

The Constitution itself provides that one of the purposes of our form of government is to “promote the general Welfare.” But the Finance Party members believe that government should promote the welfare of the wealthy.

The latest entrant into the Republican presidential sweepstakes believes that Social Security and Medicare are unconstitutional. When challenged on this notion and asked to explain what was meant by the “general Welfare” language of the Constitution, Rick Perry had no answer, which should not be surprising for someone that made a grade of D in a class on how to feed goats.

It is myopic to believe that the founders did not envision a role for the federal government in assuring that the elderly and infirm are not forced into penury and destitution by an economic and political system based on exploitation and greed. But these Finance Partiers are more than happy to enrich the corporations and toady up to the moneyed at the expense of the many. Rick Perry is just one more feckless politician from the party of finance who is seeking more power and money for his patrons.

We, the people, formed a government to be consequential in our lives, to overcome the tyranny of despotic rule, and to promote the general welfare. Now that we have a government that does just the opposite, it seems time to make use of our rights to reconstitute our government to meet the needs of the public, not the special interests of the financial class. We can do so with our votes and our voices.