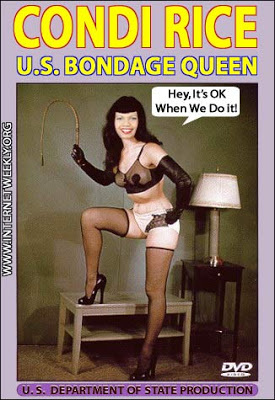 Secretary of State Condoleezza Rice has admitted for the first time that she led high-level discussions beginning in 2002 with other senior Bush administration officials about subjecting suspected al-Qaeda terrorists detained at military prisons to the harsh interrogation technique known as waterboarding, according to documents released late Wednesday by Carl Levin, the Democratic chairman of the Senate Armed Service Committee.

Responding in writing to questions by Levin, who will convene a hearing today on the administration’s interrogation program, John B. Bellinger, Rice’s legal adviser at the State Department, said they recalled participating in meetings with Ashcroft and then-Defense Secretary Donald Rumsfeld in July 2002 about an Army and Air Force survival training program called Survival, Evasion, Resistance and Escape (SERE) meant to prepare U.S. soldiers for abuse they might suffer if captured by an outlaw regime.

Bellinger, who also worked with Rice at the NSC, the then National Security Adviser “expressed concern that the proposed CIA interrogation techniques comply with applicable U.S. law, including our international obligations” and that Rice asked Attorney General John Ashcroft to “personally review the legal guidance” of specific interrogation techniques.

Waterboarding—or simulated drowning–has been regarded as torture since the days of the Spanish Inquisition.

“I recall being told that U.S. military personnel were subjected in training to certain physical and psychological interrogation techniques and that these techniques had been deemed not to cause significant physical or psychological harm,” Rice wrote in response to a question about the SERE techniques.

But those techniques were meant to prepare U.S. soldiers for abuse they might suffer if captured by a brutal regime, not as methods for U.S. Interrogations, which is what Rice said the discussions at the White House centered on. Moreover, the SERE methods were first designed by the communist government of China to be used against U.S. soldiers.

The hearing Wednesday before the Senate Armed Services Committee will focus on the genesis of the SERE techniques used during the interrogations of suspected terrorists.

Rice has denied that the U.S. tortured or abused prisoners. But in declaring the U.S. does not engage in torture, appears to be relying on a narrower U.S. definition of torture than that is accepted under international law, such as the 1984 Convention Against Torture that was signed by the Reagan administration in 1988 and ratified by the U.S. Senate in 1994.

“Waterboarding – strapping a detainee to a board and dunking him under water so he believes that he might drown – plainly constitutes torture under international law, even if it may not do so under U.S. law. …

“When the U.S. joined the 1984 convention it entered an ‘understanding’ on the definition of torture, to the effect that the international definition was to be read as being consistent with the U.S. definition The administration relies on the ‘understanding.’

“So, when Ms. Rice says the U.S. does not do torture or render people to countries that practice torture, she does not rely on the international definition. That is wrong: the convention does not allow each country to adopt its own definition, otherwise the convention’s obligations would become meaningless. That is why other governments believe the U.S. ‘understanding’ cannot affect U.S. obligations under the convention.”

There is ongoing debate as to whether the brutal interrogation techniques first used against a suspected terrorists predated an Aug. 1, 2002 legal opinion, widely called the “Torture Memo,” that provided CIA interrogators with the legal authority to use long-outlawed tactics, such as waterboarding, when interrogating so-called high-level terrorist suspects.

Neither Rice nor Bellinger provided dates about the discussions Rice led regarding interrogation methods. Additionally, Levin did not ask Rice whether Bush or Cheney participated in the talks.

In his book, “At the Center of the Storm”, former CIA Director George Tenet wrote that he attended a meeting with Rice in May 2001 where Tenet discussed how Abu Zubaydah, the alleged high-level al-Qaeda operative, planned to attack the US and Israel.

“For my regularly scheduled meeting with Condi Rice on May 30, [2001], I brought along [deputy CIA director] John McLaughlin, [then director of the CIA’s counterterrorist center] Cofer Black, one of Cofer’s top assistants, Rich B. (Rich can’t be further identified here). Joining Condi were [former White House counterterrorism czar Richard] Clarke and [former CIA official] Mary McCarthy,” Tenet wrote. “Rich ran through the mounting warning signs of a coming attack. They were truly frightening. Among other things, we told Condi that a notorious al-Qa’ida operative named Abu Zubaydah was working on attack plans.”

Abu Zubaydah was captured in Pakistan less than a year later and was whisked to a secret CIA prison site in Thailand, where he was interrogated and subjected to waterboarding—believed to have taken place sometime in July 2002 based on the discussions about interrogation methods Rice participated in with other White House officials.

FBI officials objected to the methods CIA interrogators used against Abu Zubaydah, according to previously released documents and testimony.

However, Rice wrote in response to a question from Levin that she did “not recall any specific discussions about withdrawing FBI personnel from the Abu Zubaydah interrogation.”

The Abu Zubaydah case was the first time that waterboarding was used against a prisoner in the “war on terror,” according to Pentagon and Justice Department documents, news reports and several books written about the Bush administration’s interrogation methods.

In his book “The One Percent Doctrine,” author Ron Suskind reported that President George W. Bush had become obsessed with Zubaydah and the information he might have about pending terrorist plots against the United States.

“Bush was fixated on how to get Zubaydah to tell us the truth,” Suskind wrote. Bush questioned one CIA briefer, “Do some of these harsh methods really work?”

The waterboarding of Abu Zubaydah was videotaped, but that record was destroyed in November 2005 after the Washington Post published a story that exposed the CIA’s use of so-called “black site” prisons overseas to interrogate terror suspects.

John Durham, an assistant US attorney in Connecticut, was appointed special counsel earlier this year to investigate the destruction of that videotape as well as destroyed film on other interrogations.

The latest disclosures by Rice undercut assertions by President George W. Bush, Vice President Dick Cheney, Rumsfeld and other senior administration officials who have blamed cruel treatment of detainees on “a few bad apples” who acted on their own.

In June, Levin released dozens of pages of documents that detailed a pattern of humiliation, abuse and even torture inflicted on detainees was a deliberate policy of the Bush administration – debated by mid-level lawyers at the CIA and the Pentagon, given legal cover at the Justice Department and approved at the highest levels of government.

The committee is expected to release a full report later this year. So far, the probe has found that Rumsfeld and Haynes solicited input from military psychologists in July 2002, months earlier than they had previously acknowledged, about developing harsh methods interrogators could use against detainees held at Guantanamo Bay.

The documents Levin released in June states that as early as July 2002, Rumsfeld, Haynes and other officials queried military psychologists about the use of waterboarding and other brutal methods to extract information that might not be gained through more conventional interrogations methods.

The questions from Rumsfeld and Haynes were raised one month before John Yoo, a deputy in the Justice Department’s Office of Legal Counsel, issued two memos that authorized interrogators to use stress positions, military dogs and other still unknown methods against terror suspects at Guantanamo.

Bellinger said, in a separate memo to Levin, that Yoo participated in the meetings led by Rice and gave the CIA oral guidance on interrogation techniques.

The June documents did not square with previous statements made by Haynes, who testified in 2006 that the impetus for the harsh tactics came from below, from lower-level military personnel who asked the Pentagon in October 2002 about using more aggressive techniques against detainees.

Richard Shiffrin, Haynes’ former deputy on intelligence issues, told the Senate committee that in July 2002 Haynes became interested in using the SERE techniques, such as waterboarding and sleep deprivation, as a form of interrogation against detainees.

According to one document, Jonathan Fredman, chief counsel to the CIA’s Counterterrorism Center, discussed with U.S. military officials how interrogators could use the “wet towel” technique, also known as waterboarding, against detainees to extract information.

“It can feel like you’re drowning. The lymphatic system will react as if you’re suffocating, but your body will not cease to function,” Fredman said on Oct. 2, 2002, during a meeting where specific techniques were reviewed and debated, according to the meeting minutes.

Fredman added that the “wet towel” technique would only be defined as torture “if the detainee dies.”

“It is basically subject to perception,” Fredman said. “If the detainee dies you’re doing it wrong.”

This entry was posted in RagBlog and tagged Torture, U.S. Aggression, U.S. Government. Bookmark the permalink.