Contempt for the Plight of the Common Man

Let’s be clear about the contempt that corporate Amerikkka holds for you, me, and all those trying to make their way. This example is one of thousands a day that shows that we are beneath them, they have no time for our petty concerns, and we would be better served by staying silent. It is time to bring an end to capitalism in all its criminality and contempt for us. Up the revolution !! 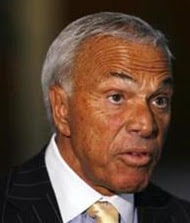 CALABASAS, Calif. – The chairman of beleaguered Countrywide Financial Corp. raised eyebrows and tempers with his snippy reply to an e-mail plea from a man who said he was in danger of losing his home.

“Disgusting,” Angelo Mozilo wrote in his inadvertent reply to an e-mail from Daniel Bailey Jr. who had asked the company to modify terms of his adjustable-rate mortgage.

Bailey said he didn’t fully understand the terms, was wrongly told he could refinance after a year and was on the verge of losing his home of 16 years because of unaffordable payments.

Bailey’s e-mail went to 20 Countrywide addresses. He used language from a form letter on the Web site LoanSafe.org, which offers advice to borrowers in trouble.

“This is unbelievable,” Mozilo wrote Tuesday. “Most of these letters now have the same wording. Obviously they are being counseled by some other person or by the Internet. Disgusting.”

Mozilo apparently clicked “reply” instead of “forward,” sending his comments back to Bailey.

Bailey posted the response on a LoanSafe forum, touching off a furor on housing Web sites.

A comment posted on loanworkout.org said Mozilo’s e-mail was “a perfect example of the ‘help’ they can expect to receive when contacting their lenders.”

Another comment on the Web site read: “If borrowers want the freedom to take out credit for hundreds of thousands of dollars, they are equally responsible to not sign something they don’t understand.”

Late Tuesday, Countrywide issued a statement saying the company and Mozilo “regret any misunderstanding caused by his inadvertent response to an e-mail by Mr. Bailey. Countrywide is actively working to help borrowers like Mr. Bailey keep their homes.”

Last week, a federal judge ruled that a shareholder lawsuit against Mozilo and other Countrywide executives and directors should go to trial. The plaintiffs claim the top officials failed to provide enough oversight of the lender and misled shareholders about the company’s true financial state.

According to congressional figures, Countrywide lost $1.2 billion in the third quarter of 2007 and another $422 million in the fourth quarter as the subprime mortgage crisis hit. The company’s stock fell 80 percent between February and the end of the year.

During the same period, Mozilo received a $1.9 million salary. He also received $20 million in performance-based stock awards and sold $121 million in stock.

This entry was posted in RagBlog and tagged Capitalism. Bookmark the permalink.