Corporate Contrition Is an Outdated Concept? 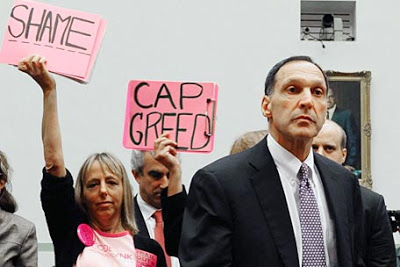 Elected officials in the past have said “I’m sorry” for everything from marital affairs to cross-dressing to corruption, and CEOs tossed around apologies like horseshoes at the company picnic.

Not anymore. As the world comes to grips with the biggest financial crisis in seven decades, the mea culpa machine has ground to a halt. Apologies, encouraged in recent years by the crisis-management industry, have dried up – even apologies deployed as a business or political strategy.

Legal concerns weigh heavily on any words that might be construed as an admission of guilt. But also weighing heavily is the silence from politicians, regulators and past and present CEOs at Fannie Mae, Freddie Mac, AIG, Bear Stearns, Countrywide Financial, Merrill Lynch and Washington Mutual. It’s been clear for weeks that the financial crisis has dammed the free flow of credit. But with each passing day, it’s also appears that the crisis has likewise dammed the free flow of taking responsibility.

When Lehman Bros. CEO Richard Fuld testified on Capitol Hill this month, members of Congress grilled him to own up. Fuld said he takes full responsibility for his decisions, that he “felt horrible about it,” but that the largest bankruptcy in history was due to circumstances beyond his control. Likewise, a trio of former AIG chief executives – Hank Greenberg, Martin Sullivan and Robert Willumstad – deflected blame in oral and written testimony to Congress.

Finger-pointers in Congress have found cover in public opinion polls that show most people blame CEOs for the crisis. But there is blame to go around, with Democrats choosing to ignore warnings about the possible implosion of Fannie Mae and Freddie Mac and Republicans supporting less regulation, says Harvard leadership expert Barbara Kellerman, who wrote a 2006 article in the Harvard Business Review titled, “When Should a Leader Apologize – and When Not?”

The absence of apologies has fed widespread outrage. Even CEOs in other industries are upset that they must now negotiate their companies through what appears to be an inevitable recession. While few CEOs in the USA have been outwardly critical of their counterparts in the financial sector, the founder and chairman emeritus of Kyocera, an electronics giant in Japan – where there is a culture of admitting mistakes – says what others may be thinking. CEOs who had a hand in the mess “should acknowledge their role and apologize, unreservedly, to their shareholders, stakeholders and the U.S. taxpayers,” Kazuo Inamori told USA TODAY through an interpreter. “They should sincerely reflect on their own management methods. They were too preoccupied with their own desires. They should acknowledge their own faults and, yes, apologize.”

However, no one in the U.S. believes they can get to the top by falling on their swords, says Dan McGinn, CEO of TMG Strategies, a public relations firm that counsels companies on threats to their reputations. McGinn says his personal belief is that there is more room for humility and honesty than most executives realize, and that the public hungers for candor and authenticity. Apologies, McGinn says, are wrongly perceived as a sign of weakness.

Yet, in the years before the crisis, apologies had become common, almost a sport, and examples can be found on YouTube from everyone from Don Imus to Jesse Jackson to Mel Gibson to Seinfeld’s Michael Richards, to Jim Cramer of CNBC’s Mad Money. Lawyers recommend against admitting wrongdoing, but companies had come to discount that advice to save reputations and get past bad news. In 2004, professors from the University of Michigan and Stanford University found that companies that accepted blame for poor performance in annual reports were more likely to outperform the market the following year.

Companies have found that heart-felt apologies can decrease the likelihood of lawsuits if they’re well crafted and don’t come off as “Sorry I got caught,” but express regret, assume responsibility and map out a plan to avoid repeating the offense, says Leslie Gaines-Ross, chief reputation strategist at public relations firm Weber Shandwick and a longtime student of apologies in crisis management.

Great apologies of the past

Past corporate apologies have come from JetBlue, Amazon, Nielsen, Seagate Technology, Sun Microsystems, Southwest Airlines, Texaco, Procter & Gamble, United Airlines, Ford Motor, Toshiba, Merck, Mattel, Taco Bell and Nike. Even Hank Paulson, now Treasury secretary and a key player in the global attempt at economic resuscitation, apologized to employees in 2003 when he was CEO of Goldman Sachs for implying that most of them were irrelevant to the firm’s success.

Steve Jobs issued an apology when Apple sold iPhones to its most eager customers for $599, then slashed the price two months later to $399. Whole Foods CEO John Mackey apologized for writing anonymous posts on financial message boards. Steve Hughes, the former CEO of tea-maker Celestial Seasonings, once wrote a letter of apology in the Boulder, Colo., Daily Camera for poisoning prairie dogs on company property.

Those may have seemed like bad deeds at the time, but they pale compared with the pink slips about to be distributed as a result of the credit crunch. The clock can’t be turned back, but a few sincere “I deeply regrets,” would help shift focus from what has happened to what needs to happen next, Gaines-Ross says. A 2006 Weber Shandwick study found that apologies had become so commonplace that their ability to allay public concern may be eroding. Even so, “CEOs should realize that an apology is not a sign of weakness, but an act of strength,” Gaines-Ross says.

Not sorry, and proud of it

Golden Gate University psychologist Kit Yarrow says both CEOs and elected officials operate in dog-eat-dog worlds where strength is rewarded and those with self doubt and regret don’t make it to the top. “It’s entirely possible that these individuals haven’t internalized that they’ve made mistakes and therefore, don’t feel responsible,” Yarrow says. “Many of the folks involved have trained themselves to avoid introspection and second-guessing. It gives you a thick skin and a sense of superiority that shields you from caring what people think of you. And if you don’t care what people think, you certainly wouldn’t feel the need to apologize.”

Other dynamics may be at play. The magnitude of the crisis has leaders frightened into taking the Martha Stewart/Pete Rose path of stubborn denial, which may have helped put one in prison and blocked the other from baseball’s Hall of Fame. The bigger the injury, the longer the wait. By the time Bridgestone CEO Masatoshi Ono apologized to the Senate Commerce Committee in 2000 for faulty tires, four years had passed since the problem first appeared and the Bridgestone/Firestone incident had become a case study in how not to handle a crisis. Ono retired shortly afterward. In 1995, Helge Wehmeier, then CEO of Bayer U.S., expressed deep regret on behalf of Bayer’s original parent company, I.G. Farbenindustrie, for its having been complicit in the Holocaust. Ten years later, then-CEO of Wachovia Ken Thompson apologized that two companies the bank acquired had owned slaves.

A key reason for the sudden lack of apologies may be that there is so much cover afforded. The financial problem is complex, and culprits abound, Kellerman says.

“When the waters are this muddy, it’s difficult to assign blame,” Kellerman says. She calls such cover “the blessing of many hands,” saying it allows those people and institutions responsible to hide, or even go on the offense and blame others.

“Individuals can ultimately convince themselves that they did what anyone would do in the same situation,” Yarrow says. “With so many players, it’s easy to shift blame. Under stress, the mind finds ways to protect itself from truths that can damage a positive self-image.”

Silence is golden during litigation

The strongest argument for silence may be the courtroom. Grand jury investigations have begun, Fuld and other executives have received subpoenas, and the standard advice of criminal defense lawyers is to say nothing, says Columbia law professor John Coffee. “Everyone remembers that six months after the fall of Enron and WorldCom, indictments began to come down, and it rained indictments for the next year,” he says. “Those who accept responsibility might become the lightning rod that attracts the first bolt of lightning from the prosecutors.”

“After two decades of class-action litigation, most general counsels will caution their CEOs against apologizing until the facts are thoroughly investigated and liabilities are determined,” McGinn says. “This is in conflict, of course, with the expectations of the media and the public.”

There is also a fresh crop of leaders running companies most often implicated in the crisis, which has so far allowed old leaders to step into the shadows. Edward Liddy replaced Willumstad at AIG, Herbert Allison replaced Dan Mudd at Fannie Mae, and David Moffett replaced Richard Syron at Freddie Mac, all last month. “Time is running out for apologies to be effective,” Gaines-Ross says. “If a few CEOs act contrite and take action, shareholders might breathe a sigh of relief and move on.”

Wrongdoers will have cover only for so long, and some CEOs and politicians eventually will be identified as key culprits, Kellerman says. She predicts they will likely be exposed by shareholder activists and Internet bloggers. Few hold hope of apologies from elected officials, who don’t have to protect the viability of a company and have only their own personal reputations to defend. Congressional apologies often require smoking guns and more often involve sexual scandal than acts of public harm. In Congress, harmful actions are blamed on others, Gaines-Ross says.

“It’s hard for most of us to imagine how someone could be responsible for such damage and loss to others and not feel an urgent need to apologize,” psychologist Yarrow says. “Obviously some of those investment bankers and politicians aren’t like the rest of us.”

“I think that the heavens, or natural common wisdom, may be suggesting that we try to live more down-to-earth and honest lives, ” says Kyocera’s Inamori, who is a Zen Buddhist priest. He says profit is society’s reward for serving its interests.

“In order to restore and revitalize capitalism, it is crucial that business executives regain this attitude,” Inamori says.

This entry was posted in RagBlog and tagged Bank Bailouts, Banking, Ethics. Bookmark the permalink.