Danny Schechter : Sayonara to Mike Wallace and the End of an Era 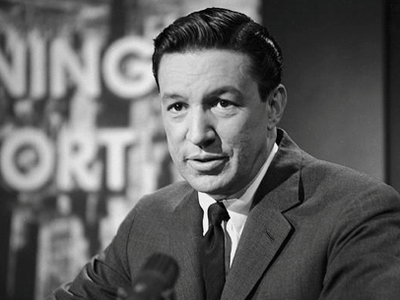 Mike Wallace turned the macho face-off into a personal signature that resembled nothing so much as wrestling.

The picture in The New York Times obit showed his wall of Emmys — I am sure he had a museum-full — all thanks to his relentless drive and unlimited energy.

Later in life, he would acknowledge that he was a manic depressive, but it was that manic part that pushed him to interview a Who’s Who of Who Was, and to expose endless bad guys for decades on 60 Minutes, often with gimmicky confrontational interviews that showcased his considerable talents, and which helped make 60 Minutes America’s most watched news magazine.

My earliest memory of him was not on CBS where he achieved iconic status but on a network that came and went called Dumont, where he did an interview show for many years before he went national.

The show was called Night Beat, and was shot in black and white in a darkened studio that Mike lit up with his questions and chain smoking, very much in the Edward R. Murrow tradition.

The episode that stuck with me was his interview with Michael J. Quill, the late president of New York’s Transport Workers Union who liked to strike on New Year’s Eve to get the best deals for his members.

The two Mikes were going mano a mano, when Wallace, with black hair slicked back, posed a simple question that I’ve never forgotten.

He asked: “How did you organize such a diverse group of workers into one union?

Quill smiled, and then responded with that Irish brogue of his, saying, “Well Michael, there was one issue that brought the men together.”

And what was that?

“There was a lack of toilets for the subway workers.”

“And not only that, Michael,” he added, “where there were toilets, there was no toilet paper.”

That was the issue: the lack of tissue.

The two men had a great laugh and I learned a big lesson about how it is often the small things that piss people off enough to stand up for their rights.

Somehow, because of that late fifties moment, I thought of Wallace as some kind of a progressive until it was reported that he had voted for Richard Nixon. (His son Chris now works for Fox News, perhaps because of the values he was taught as a kid. I am not sure about that!)

Many of Wallace’s interviews were far more combative and he turned the macho face-off into a personal signature that resembled nothing so much as wrestling, a far more successful TV format. At ABC he was labeled, “the Terrible Torquemada of the TV Inquisition.”

Ironically, Wallace later said the interviews he enjoyed the most were the more honest probing ones he did earlier in his career.

Later in his life, he would become the center of an embarrassing scandal when 60 Minutes, at the behest of the CBS brass, killed an investigation of a cigarette company accused of knowingly manufacturing a product that caused cancer.

Wallace got into a very ugly spat with his long time producer Lowell Bergman that was later featured in a movie that exposed Wallace’s complicity. (He later did the story but his reputation suffered a blow.)

Wallace would became famous not for probing questions about the working class but for stagey interviews about the ruling class.

The New York Times cited one:

Mr. Wallace created enough such moments to become a paragon of television journalism in the heyday of network news. As he grilled his subjects, he said, he walked “a fine line between sadism and intellectual curiosity.”

His success often lay in the questions he hurled, not the answers he received.

“Perjury,” he said, in his staccato style, to President Richard M. Nixon’s right-hand man, John D. Ehrlichman, while interviewing him during the Watergate affair. “Plans to audit tax returns for political retaliation. Theft of psychiatric records. Spying by undercover agents. Conspiracy to obstruct justice. All of this by the law-and-order administration of Richard Nixon.”

Mr. Ehrlichman paused, and said, “Is there a question in there somewhere?”

No, Mr. Wallace later conceded. But it was riveting television.

Later he was caught paying for interviews and usually became more important in television terms than the person he interviewed. In TV, landing a big interview is called “Getting the Get” and he got some amazing ones including Ayatollah Khomeini.

His producers would be seductive and patronizing in setting them up, but then Wallace would find a way to go in for the kill.

He took pleasure in being seen as a tough guy, the role he played on TV. David Bauder of AP said of him,

Wallace didn’t just interview people. He interrogated them. He cross-examined them. Sometimes he eviscerated them. His weapons were many: thorough research, a cocked eyebrow, a skeptical “Come on” and a question so direct sometimes it took your breath away.

I hate to break this to you but that posture quickly became a ratings winning game, an act, a shtick, like so much of TV News. He later abandoned the sandbagging entrapment interview when others like Geraldo Rivera “borrowed” the technique.

Having worked at ABC’s 20/20, a 60 Minutes wannabe, I could see how many high profile segments were invariably dramatized and hyped. I wrote about my experience in The More You Watch The Less You Know, a title that expressed my view, but I did get to meet some of the 60 Minutes crew where a close friend of mine has worked for years at a senior level.

Don Hewitt, the demigod who ruled the roost there could be arrogant and condescending with his emphasis on telling stories, more than slaying evil individuals and institutions, but he created a family that took on important issues even as so many other TV stations began pandering by exploiting celebrities and kowtowing to power.

He and Mike were often at each other’s throats before they kissed and made up. Of them all, Andy Rooney was more the stand-up union loyalist than the egomaniacal personality.

I did get to know CBS’s Walter Cronkite, who endorsed our Mediachannel1.org in glowing terms. When Walter couldn’t show up for a discussion about the decline of journalism with Professor Ben Barber, Mike Wallace graciously sat in for him.

Mike didn’t relate to much to our brand of harsh criticism of network journalism but he gave as good as he took. In that moment, I saw him as a mensch, a phase of affection that I can use on this Passover weekend.

In a way, as serious as some of the subjects he took on were, it became more show business more than news business.

He was very competitive and in some cases competed against Barbara Walters who also grew up in Brookline, Massachusetts, where he lived as a kid. He was not above stealing interviews and was a tough taskmaster to work with, but TV News was less when he left late in his own life.

He needed the oxygen of media attention and began slipping away when he lost it.

TV News is not what it once wanted to be. It had a way of losing its greats. Murrow was forced out and, now the anchor who aspired to be like him, Keith Olbermann, has lost his own job perhaps because a personal failing or impatience with what the business has become. Dan Rather was set up, and Peter Jennings died too young.

The values of the market have torpedoed whatever senses of mission most of our media may have once been seen to have, although there is more nostalgia than reality about the glory days.

But, even knowing what we do about Big Media’s function on behalf of the status quo — selling its wars and pumping deference to authority — let’s still say a dayenu for Mike Wallace who for a long time really cared and taught us real lessons about right and wrong.

News Dissector Danny Schechter has worked in TV News at the local, cable and network levels, before defecting to independent journalism and spends too much of his time challenging official journalism and its service to the status quo on his Newsdissector.net blog. He edits Mediachannel1.org and hosts a show on Progressive Radio Network. Email Danny at dissector@mediachannel.org. Read more articles by Danny Schechter on The Rag Blog.

1 Response to Danny Schechter : Sayonara to Mike Wallace and the End of an Era