Danny Schechter : We Are Drowning Here 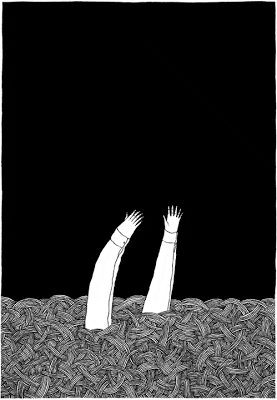 
“At a time like this, scorching irony, not convincing argument, is needed. Oh had I the ability, and could reach the nation’s ear, I would, pour out a fiery stream of biting ridicule, blasting reproach, withering sarcasm, and stern rebuke.” — Frederick Douglass, 1852

Oil prices are rocketing. Iranian warships are moving into the Mediterranean to shadow the U.S. warships already there. Propaganda news is growing with rumors of Al Qaeda links with Iran, and, then, less speculative news about real links between the terror groups and the armed opposition in Syria.

As Rolling Stone’s Matt Taibbi puts it, the smell of war is in the air and on the air, “You can just feel it: many of the same newspapers and TV stations we saw leading the charge in the Bush years have gone back to the attic and are dusting off their war pom-poms.”

CLG adds: “Officials in key parts of the Obama administration are increasingly convinced that sanctions will not deter Tehran from pursuing its [alleged] nuclear program, and believe that the U.S. will be left with no option but to launch an attack on Iran or watch Israel do so.”

The timing now seems to be for war in October, just before the next presidential election. Does that mean that the White House believes that war fever will generate more support for an embattled Commander in Chief? Orwell was right in his classic 1984: “The object of the war is not to make or prevent conquests of territory, but to keep the structure of society intact.”

Here in the “homeland,” the FBI busts a “terrorist” on his way, we are told, to blow up the Congress. Turns out he was supplied with phony weapons by the FBI itself, a specialist in entrapment. The G-Men supposedly became suspicious when they heard that this young Moroccan, living illegally in Virginia, told someone who told someone that the war on terror was a war on Muslims. That’s probably a majority view in the Middle East, but to them it was menacing and proof of evil intent.

After their puppet “suspect” was in custody, they reassured one and all that the Congress was never at risk. (Nor, now, is the FBI’s next appropriation!)

What a relief! Congress has survived to fight another day in its own war — a partisan war without end. For the most part, the political logjam continues and not just because of warring ideologies.

Unseen and only rarely commented upon by pundits who know how to cover political horse races but not political skullduggery is the role that big money plays behind the scenes. That is kept out of sight and out of mind.

Watching what’s happening to our democracy is like watching the cruise ship Costa Concordia founder and sink slowly into the sea off the coast of Italy, as the passengers, shorn of life vests, scramble for safety as best they can, while the captain trips and falls conveniently into a waiting life boat.

We are drowning here, with gaping holes torn into the hull of the ship of state from charges detonated by the owners and manipulators of capital. Their wealth has become a demonic force in politics. Nothing can stop them. Not the law, which has been written to accommodate them. Not scrutiny — they have no shame. Not a decent respect for the welfare of others — the people without means, their safety net shredded, left helpless before events beyond their control.

Yes, “we are downing here.”

But it is not just money per se that is the problem, but those one-percenters that are manipulating it as a weapon to drive our democracy into the dumper.

Charles Pierce names and shames them in the pages of Esquire, writing about

the undeniable fact that, over the course of a decade, a bunch of cheats, thieves, and suited mountebanks stole most of the national economy and then wrecked whatever was left of it. But what’s most extraordinary about the whole thing is that, after they swindled their swindles and heisted their heists, and got paid off by the rest of us for having looted our national economy, they all kept doing the same things they were doing before. These included extravagant bonuses and, of course, continued crimes of capital that ought to be capital crimes.

On the same day I read, Joe Nocera in The New York Times saying it’s not important to punish the banks. So clearly the liberal media is in large part in cahoots with the right wing message points, avoiding any structural analysis, while pushing for mild “reforms” unlikely to reform anything.

One consequence of our corporate news system, according to Richard Flanders in The Atlantic is that Americans are being steered into becoming even more conservative.

Even with the president’s approval rating showing signs of life and the Republicans busily bashing themselves over the head — “one is a practicing polygamist and he’s not even the Mormon,” retired Supreme Court Justice Sandra Day O’Connor recently quipped about her party’s two frontrunners — America continues to track right, according to polling data released by the Gallop Organization this week.

Most upsetting is that the people who are suffering the most are stuck in the Alice in Wonderland world of conservative ideology.

This study concludes. “The ongoing economic crisis only appears to have deepened America’s conservative drift — a trend which is most pronounced in its least well off, least educated, most blue collar, most economically hard-hit states.”

The public becomes dumber in part because our media is a dumbing-down machine. No wonder, alternative voices are brushed to the margins by our not-so-free press. This past week, I was interviewed by RT and Al Jazeera, but none of the U.S. TV news networks I used to work for will have me on. It’s not a personal thing: I am not alone.

Yes, MSNBC has added two progressive hosts, but in the morning, on weekends, when viewing is lowest. Fox, meanwhile, dumped Judge Napolitano and his sometime sensible and outspoken libertarian show. Can’t have that, can we?

It’s time for Occupy Wall Street to add media reform to its emerging agenda. The media war is as real as any other, and unless we fight that one, we will lose all the others. Politics is a war of ideas, of different narratives in collision.

It’s not enough to chant, “We are the 99%.” We have to explain who rules America and how to change it.

One way to do it is educate the country about how many of the same interests that own the banks own the media. Perhaps that’s why most media outlets are not reporting that unemployment increased this month and that underemployment is up to 19%.

Everyone knows that the Great Recession has inflicted tremendous damage to the lives and fortunes of millions of Americans. But what you may not know is that most of the suffering is still to come.

We’re not even halfway done with this mess.

That’s why activists can’t give up.

If there was ever a time for progressives to unite around some coherent 10-point plan that can be used to reach potential supporters and broaden the movement for change, this is it. The aspiration should be to build a coalition that can win, to “occupy the mainstream.” Sadly, here as in Greece, where the economic crisis is at a boiling point, a headline in the Financial Times sums up a key obstacle to fighting back:

Greek Left Has Most Support But is Fragmented

What say you, unions, churches, minorities, students, workers, activists, feminists, and occupiers? Do we work together or lose apart? Assuming that the GOP self-destructs, do we really think that more ‘Bama can make the difference that needs making?