Harry Targ : Hoosier Teach-In and the Question of Historical Narratives 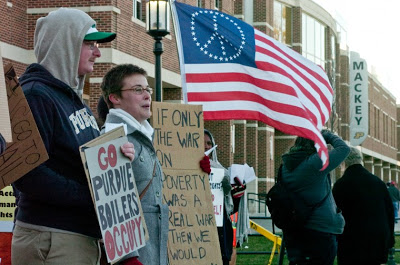 WEST LAFAYETTE, Indiana — Last week a group of Hoosier Occupiers met in a “teach-in” format to discuss how movements for change can and should relate to the labor movement and the working class at large.

The event, hosted by Occupy Purdue, was held in a community center in West Lafayette, Indiana. An extended panel included a faculty member from African American Studies on campus, a Unite-Here organizer, an activist from the International Brotherhood of Electrical Workers, and representatives from the International Socialist Organization and the Committees of Correspondence for Democracy and Socialism.

The panel moderator skillfully questioned panelists and encouraged what became rich and thorough discussion and debate with attendees who were not designated panel speakers but shared the interest and much of the experience of those who were the panelists.

Virtually everyone recognized the problems and strengths of the movements that sprung up last summer, saw the necessity to move ahead with new ideas about organizing and educating many publics, and believed in the necessity of building a broad working class movement. Most felt that the working class constitutes the vast majority of people, whether they are in unions or not.

The knowledge, experience, and passion of all who attended this event were palpable and gave reason to be hopeful about the possibilities for progressive change in the months and years ahead. While teach-in participants agreed on most things, tensions were noted in at least three areas that so often surface as progressive movements are launched. While these tensions may not be easily resolvable, they need to be part of the consciousness of participants as they develop their day-to-day programs.

The first issue has to do with historical narratives. Many participants told historical stories that justified advocacy for particular strategies for building a mass movement. These narratives were stories about the origins of political movements, their participants, the issues they engaged in, the outcomes of their activities, and their connection to the projects that contemporary activists are pursuing.

Teach-in narratives addressed class, race, and gender. Some emphasized workers and class struggle, others talked about labor militancy and the construction of labor unions, and still others emphasized the deleterious consequences of racism and sexism in the labor movement.

There was also a current among the story-tellers about how organized labor had betrayed the working class with the implication that the movements of the 21st century must distinguish between workers in general and workers in unions.

One narrative addressed the issue of race and the organized labor movement in the United States. Historical examples of organized labor’s racist practices included reference to exclusionary clauses requiring that Black and white union locals be segregated or that only limited numbers of African-Americans ever became labor movement leaders.

Beginning a narrative of class and race by identifying certain key dates, for example, the founding of the American Federation of Labor, the rejection by white workers of integrated unions in the packinghouses of Chicago in 1919, or the racism that impaired the campaign to organize the South in “Operation Dixie,” can make this point.

On the other hand, if the class and race narrative begins with the anti-racism of the Knights of Labor and the Industrial Workers of the World in the 1880s, or the struggles around slogans of “Black-White Unite and Fight” in CIO organizing drives of industrial workers in the 1930s, or left unions going South after World War II to organize integrated unions, or the significant support given the foundation of the Southern Christian Leadership Council (SCLC) by the United Auto Workers and the United Packinghouse Workers of America (both affiliated with the new AFL-CIO), then the story is different.

The point here is that the adoption of one or another narrative of the past has consequences for political activism today and tomorrow. Activists today do not need to accept one narrative over another. They just must recognize that each narrative tells part of the story that is critical for today’s work.

To some degree the discussion on race and class at the teach-in reflected the recognition that in this case, there are different narratives about class, race, and labor. Maybe in the end activists are best served by learning the lessons from very different narratives.

A second issue that inevitably comes up at every movement-building discussion has to do with relations between the left and elections. On the one hand, electoral work is taxing, absorbing time and money. Passions are energized by electoral work and oftentimes the candidates selected only minimally satisfy the goals electoral activists are seeking. Sometimes compromises are carried out by candidates progressives support that are on balance net losses for the people.

In the history of the two-party system of the United States, there usually has been limited ability for progressive voices to be heard. Progressives are mired in the classic “lesser of two evils,” conundrum. This problem is exacerbated by the transformation of the electoral system into a sports contest. The media identifies certain “stars” who become the subject of 24/7 news coverage as personalities with little or no attention to political issues.

However, elections, at state and local as well as national levels, do matter to large portions of the working class. For example, as a result of the 2010 elections, union rights have been reduced through passage of Right-to-Work and anti-collective bargaining laws. The loss of Medicaid coverage for women who seek reproductive health services from Planned Parenthood will have disastrous consequences for large numbers of customers. Defunding of public institutions and services — education, libraries, transportation — hit working people the hardest.

And elected officials get to appoint full-time judges from district courts to the Supreme Court. It is clear that one of the least observed outcomes of the “Reagan Revolution” is the life-time appointments of federal judges that have ruled in ways that have destroyed worker, citizen, and women’s rights. The criminal “justice” system has qualitatively advanced the prison-industrial complex during the last decade.

The contradictory character of elections suggests that the left may need a variegated strategy that addresses participation or non-participation at state and local levels as well as at the national level; that works for and against key critical candidates; that campaigns around issues relevant to class, race, and gender; and that uses the electoral arena to politicize and mobilize the vast majority.

Of course, in certain political and geographic spaces, organizing third parties might serve many of these purposes.

The final issue that activists struggle over has to do with who they are. It is often the case that activists have developed an intellectual pedigree. They have read theory and history, and many come out of movements that provide important experiences.

At the same time, there are much larger numbers of workers and others who share the basic values of the most active and who have an experiential pedigree. For a variety of reasons, large numbers of politically alert and conscious workers have not engaged in political struggles on a regular basis. But many of these workers are members of organizations that in the main have articulated progressive agendas: from the National Association for the Advancement of Colored People, to the American Federation of Labor and Congress of Industrial Organizations, to the National Organization of Women, to the Sierra Club.

In the end activists, who are the most committed in the sense of time and resources, should be sympathetic to the existing mass organizations. In other words, activists need to work with their brothers and sisters in a whole array of organizational contexts to build networks and break down barriers between different political voices.

Activists need to shed their own sense of superiority while they work with non-movement activists to reduce broad stereotypes and forms of suspiciousness among those in the popular organizations.

So this wonderful encounter in West Lafayette brought together activists from around the state; people of different ages and backgrounds; reflected class, race and gender; and raised directly and by inattention issues critical to building a progressive future. It was clear from the dialogue that narratives, elections, and political identities, in one way or another, constitute continuing hurdles which may be difficult to resolve but should be critically examined.

1 Response to Harry Targ : Hoosier Teach-In and the Question of Historical Narratives