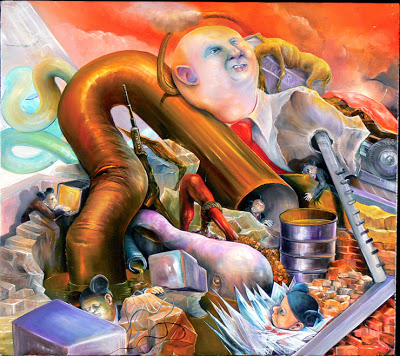 Graphic from Progressive America Rising.
Is the U.S. in a ‘Dangerous State of Funk’?

Much political rhetoric, and a spate of new books, would have us believe that the U.S. is in a dangerous state of funk.

NEW YORK — The eccentric Bengali intellectual Nirad C. Chaudhuri once explained the end of the British Raj in India as a case of “funk,” or loss of nerve. The British had stopped believing in their own empire. They simply lost the will, in Rudyard Kipling’s famous words, to fight “the savage wars of peace.”

In fact, Kipling’s poem, “The White Man’s Burden,” which exhorted the white race to spread its values to the “new-caught sullen peoples, half devil and half child,” was not about the British empire at all, but about the United States. Subtitled “The United States and the Philippine Islands,” it was published in 1899, just as the U.S. was waging a “savage war of peace” of its own.

Chaudhuri had a point. It is difficult to sustain an empire without the will to use force when necessary. Much political rhetoric, and a spate of new books, would have us believe that the U.S. is now in a dangerous state of funk.

For example, Republican presidential candidate Mitt Romney likes to castigate President Barack Obama for “apologizing for America’s international power,” for daring to suggest that the U.S. is not “the greatest country on earth,” and for being “pessimistic.” By contrast, Romney promises to “restore” the greatness and international power of the United States, which he proposes to do by boosting its military force.

Romney’s Kipling is the neoconservative intellectual, Robert Kagan, whose new book, The World America Made, argues against “the myth of American decline.” Yes, he admits, China is growing in strength, but U.S. dominance is still overwhelming; The U.S. military might can still “make right” against any challenger. The only real danger to U.S. power is “declinism”: the loss of self-belief, the temptation to “escape from the moral and material burdens that have weighed on [the U.S.] since World War II.” In a word, funk.

Like Chaudhuri, Kagan is an engaging writer. His arguments sound reasonable. And his assessment of U.S. firepower is no doubt correct. True, he has little time for domestic problems such as antiquated infrastructure, failing public schools, an appalling healthcare system, and grotesque disparities in income and wealth. But he is surely right to observe that no other power is threatening to usurp the U.S. role as the world’s military policeman.

Less certain, however, is the premise that the world order would collapse without “American leadership.” France’s King Louis XV allegedly declared on his deathbed: Après moi, le déluge. [“After me, the flood.”] This is the conceit of all great powers.

Even as the British were dismantling their empire after World War II, the French and Dutch still believed that parting with their Asian possessions would result in chaos. And it is still common to hear autocratic leaders who inherited parts of the Western empire’s claim that democracy is all well and good, but the people are not yet ready for it. Those who monopolize power cannot imagine a world released from their grip as anything but a catastrophe.

In Europe after World War II, Pax Americana, guaranteed by U.S. military power, was designed “to keep the Russians out and Germany down.” In Asia, it was meant to contain communism, while allowing allies, from Japan to Indonesia, to build up economic strength. Spreading democracy was not the main concern; stopping communism — in Asia, Europe, Africa, the Middle East, and the Americas — was. In this respect, it succeeded, though at great human cost.

But, now that the specter of global communist domination has joined other fears — real and imagined — in the dustbin of history, it is surely time for countries to start handling their own affairs. Japan, in alliance with other Asian democracies, should be able to counterbalance China’s growing power. Similarly, Europeans are rich enough to manage their own security.

But neither Japan nor the European Union seems ready to pull its own weight, owing in part to decades of dependency on U.S. security. As long as Uncle Sam continues to police the world, his children won’t grow up.

In any case, as we have seen in Iraq and Afghanistan, “savage wars of peace” are not always the most effective way to conduct foreign policy. Old-fashioned military dominance is no longer adequate to promote U.S. interests. The Chinese are steadily gaining influence in Africa, not with bombers, but with money. Meanwhile, propping up secular dictators in the Middle East with U.S. arms has helped to create Islamist extremism, which cannot be defeated by simply sending more drones.

The notion promoted by Romney and his boosters that only U.S. military power can preserve world order is deeply reactionary. It is a form of Cold War nostalgia — a dream of returning to a time when much of the globe was recovering from a ruinous world war and living in fear of communism.

Obama’s recognition of U.S. limitations is not a sign of cowardly pessimism, but of realistic wisdom. His relative discretion in the Middle East has allowed people there to act for themselves. We do not yet know what the outcome there will be, but “the greatest country on earth” cannot impose a solution. Nor should it.

[Ian Buruma is Professor of Democracy and Human Rights at Bard College, and the author most recently of Taming the Gods: Religion and Democracy on Three Continents. This article was published by Aljazeera and was distributed by Progressive America Rising. A version was first published on Project Syndicate.]