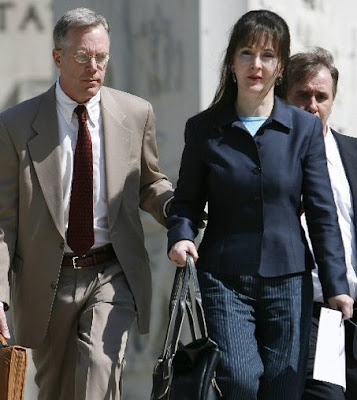 DC Madam Deborah Jeane Palfrey, who later died in what was called a suicide, is shown with her lawyer at federal court in Washingon in 2007.
The Sexual Extortion Scandal:
Sex and Politics Under Republican Rule

Sex and politics were inextricably linked in the D.C. Madame Case, but the mainstream media never got beyond surface events. Deborah Jeane Palfrey died May 1, 2008, in a shed behind her mother’s house. This is about all most people know for certain about her.

A little digging by the mainstream press or the Justice Department could well turn up information suggesting that Ms. Palfey served the interests of the intelligence community.

The official cause of death was that she had hanged herself, but there were claims that the FBI suppressed evidence that she had been murdered. It was said she killed herself rather than go to prison.

Palfrey, the notorious “DC Madam,” used her Pamela Martin Associates escort service as a cover for a call girl ring. A great deal of FBI effort went into bringing her to court and sentencing her to prison. She was indicted March 1, 2007, for employing more than 100 women for the purpose of prostitution. The feds neglected to seize her 46 pounds of business telephone records which were in California and then got restraining orders forbidding the release of the records.

Judge Gladys Kessler and marveled at why the government was determined to come down hard on this woman while moving heaven and earth to protect her customers. The judge then asked to be reassigned, and she was replaced by a judge who had been on the Federal Intelligence Surveillance Court. The judge rejected her effort to invoke the Classified Information Procedures Act (CIPA) .

Trying to defend herself, she probably sealed her own fate when she gave here telephone records to the ABC television network, whose Brian Ross began an investigation. The investigation ended quickly and abruptly and it was said that parent Disney bowed to pressure from Karl Rove and the White House. Ross said none of the clients were “newsworthy.” Palfrey also said her case had national security implications. Some said one of its prominent personalities had used the service. Senator David Vitter of Louisiana confessed to using the service. There was quite a bit of information that Richard Cheney was a client, sometimes using the name Bruce Chiles, when he ran Halliburton, but it could have been that he was simply hiring girls for customers.

Palfrey’s death was convenient because it seriously hindered a number of inquires. The most important was a long-standing probe into a D.C. sex ring that was probably employing her people. The ring was used to entertain politicians and channel money from defense and intelligence contracts to Republicans through Jack Abramoff and some of his friends. The sex ring could well have been the key to understanding the full dimensions of the K Street Strategy, a plan to force lobbyists to hire Republicans and milk as much money from them as possible. There were a few convictions, including that of Abramoff, for bribery and influence peddling, but much remains to be known.

The only serious inquiry into the sex ring was a long probe of the limousine service that brought the ladies of the night to the hotels. Telephone records showed that Palfrey talked to one of the men accused of bribery who held some of the sex parties, and there were calls to the service that transported the women. That service received $12 million in government contracts. San Diego U.S. Attorney Carol Lam, who was investigating the DC sex ring funded by the two contractors, was fired by the Bush Administration.

A subset of this inquiry should have involved exploring reports that children were also being employed for sex. Investigator Tom Flocco, who is sometimes very much on target, claims that good sources claimed the political sex rings had ties to deviant sex rings, and that they in turn were tied to a prominent right-wing policy council. After all, we know that two sex rings in the 1980s did this, and that a few child prostitutes were even given a late night tour of the White House.

The Palfrey inquiry to some extent also that served the staff of Maryland Republican Governor Bob Ehrlich. Ms. Palfrey said that some of her girls were used there. This ring seemed to be fueled with money generated by gambling interests. Tom DiBiagio, the U.S. Attorney in Baltimore, was fired by the Bush administration 2004 after he had uncovered a great deal of corruption. on Palfrey and the use of sex to corrupt people but was not interested in Palfrey. He was after the governor, Abramoff, three congressmen, and top staffers for several Republican Representatives and Senators. Brandy Britton, a former University of Maryland professor, a Palfrey employee, was charged with prostitution, and hanged herself.

At some point, Palfrey must have thought she would get off, as she took steps to purchase a home in Frankfurt, Germany, where Foggo had once worked. Some have speculated that she was getting ready to set up a similar operation for the agency in Germany. She was forced to return to the U.S. when Governor Ehrlich was facing re-election. Perhaps there was a fear that she kept a “black book.”

In 1990, Deborah was arrested for “pimping, pandering, and extortion” in connection with an escort service she ran in San Diego. With the help of CIA logistics officer Kyle “Dusty” Foggo, she was released in 1993. It has been reported that he ran sex extortion rings in other countries to ensnare politicians. He had also worked for Ambassador John Negroponte in Honduras during Reagan’s not-so-secret war in Central America. Jim Olson, a former station chief, noted that Foggo “failed to report a number of his contacts with foreign national women.”

Deborah established a new escort service in the District of Columbia in 1993, which employed a Naval Academy instructor, several other military personnel, a psychiatrist, and a number of highly educated professional women. Some add up the factual information and infer she was working for the CIA.

It is claimed by some that Foggo came to run the CIA’s sexual blackmail operations in the U.S. We know that he played cards at events where prostitutes were employed. He was indicted in 2007 for fraud involved in matters related to the bribery of California Republican Congressman Rusty Cunningham. Before the indictment, Director Porter Goss had promoted Foggo to the number three job in the agency. Foggo threatened to expose “sensitive programs” and the government dropped 27 of 28 counts against him. He could have received a 20 year sentence but got 37 months.

Wayne Madsen reports that some of those who played poker at these hotel parties watched videos of sex between prostitutes and targeted diplomats, politicians, and Bush administration officials. Sometimes present were Cunningham, Porter, Foggo, and Brant ‘Nine Fingers’ Bassett, a House Intelligence Committee staffer.

There is a long history of sexual blackmail in Washington going back at least to the ring jointly operated by Roy Cohn and the CIA. In the eighties, there were two well known rings that even received some coverage in the D.C. papers. Both of these had ties to the intelligence community. Later, we discovered there were at least two other smaller operations, one of which was revealed in Ed Rollins’ autobiography. These two latter operations seemed to have been focused on getting Republicans to vote for the legislation of certain lobbyists and did not appear to be tied to the intelligence community.

The three former rings benefitted special interests and the intelligence community. The Cohn operation seemed to be thoroughly bipartisan, while the two in the eighties and Hookergate were tied to one party. However, they appear to have been some Democratic targets.

With this much information at our disposal, one wonders why there was not one thorough MSM probe of the George W. Bush era sex ring financed by the two San Diego contractors and possibly Jack Abramoff. We also know that until 1976 hundreds of MSM journalists were on the CIA tab as part of Operation Mockingbird. Maybe there are more effective ways of muzzling journalists these days than cash payments.

This would be a good time to open a full investigation, but the present Justice Department does not seem friendly to snitches and whistleblowers.

Articles on previous DC sex rings have been posted here.

[A Plug for Sherm’s Book. Sherman DeBrosse spent seven years writing an analytical chronicle of what the Republicans have been up to since the 1970s. It discusses elements in the Republican coalition, their ideologies, strategies, informational and financial resources, and election shenanigans. Abuses of power by the Reagan and G. W. Bush administration and the Republican Congresses are detailed. The New Republican Coalition : Its Rise and Impact, The Seventies to Present (Publish America) can be acquired by calling 301-695-1707. On line, go to here.]