Defending the Indefensible: Billions in Subsidies

I don’t know about you, but I wanna throw up all over these smug, arrogant fuckers. 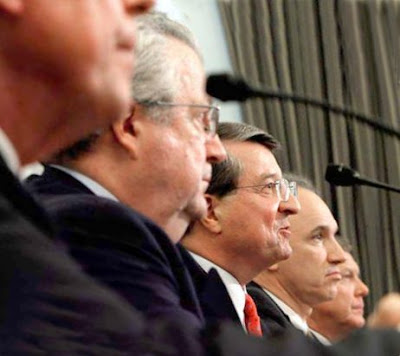 Top Oil Execs to Congress on Their Record $123 Billion Profits: ‘We feel your pain, but don’t blame us!’

Ten days after US military deaths in Iraq reached 4,000, the top executives of the five largest oil and gas companies appeared before Congress. It was Tuesday, April 1st – April Fools’ Day – and they were there to address the record profits their companies were bringing in and why the companies should continue to receive billions in government subsidies by way of tax breaks. The top honchos were from Exxon, Shell, BP America Inc., Chevron Corp. and ConocoPhillips, and were appearing before the Select Committee on Energy Independence and Global Warming. The execs told Congress that they know record fuel prices are hurting the American people, and claimed it’s not their fault and said their huge profits are in line with other industries.

Combined, the oil companies made $123 billion last year. This is at a time when US motorists are paying record prices at the pump – now averaging $3.29 a gallon amid talk of $4 a gallon this summer. The price of oil has settled at just over $100 a barrel on the New York exchange. And one out of 8 Americans are on food stamps. Then there’s the mortgage crisis, the housing crisis, … not to mention the Constitutional crisis. And recent economic experts have tied the huge costs of the Iraq and Afghanistan wars to bringing down the American economy, and there’s even talk that we’re heading into not just a recession but a massive depression …. we could go on.

Record profits by the oil companies. Even Alan Greenspan had to admit that the reason we’re in Iraq is because of the oil.

4,000 US Deaths to Secure Iraq Oil Fields for Oil Companies

So, let me get this straight. Our economy is going down the toilet while the hike in gas prices drives all our consumer goods – like food – up. The Iraq war is taking away our financial resources while we’re in Iraq to secure the oil fields for the oil companies. And the oil companies are making record profits off of us. My god, no wonder we elected Bush twice! We’re dumber than a bag of hammers.

But wait – our countrywomen and men are dying to secure those oil fields! Our people! 4,000 and counting. They died for the oil executives who testified in front of our Congress and said, hey, we feel your pain, but don’t blame us, we’re just making money like everybody else. That’s what they said.

The Associated Press reported that the execs said their earnings are typical and in line with the average of other major US industries. AP outlined the combined 2007 earnings and revenues of five top companies in some major industries: