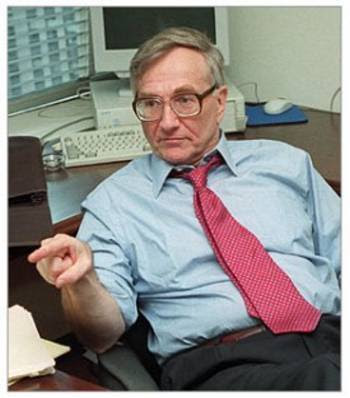 Last night my 82 year-old mom called (after attending Seymour Hersh’s speech), and she was blown away.

Mother added that Hersh spoke about the mental condition of the soldiers that are coming home. It is bad, and unlike my (Vietnam) generation’s mental illness, replete with heroin addiction and homelessness, this one is returning with uncontrolled and murderous rage. And for the most part it is not being treated, because of lack of funding. I’m paraphrasing my mother’s paraphrasing of Hersh, but the shit is about to hit the fan.

After his stories on Abu Ghraib were published in The New Yorker in 2004, Seymour Hersh got a call from an old friend in Tel Aviv — a retired Mossad officer, a man “who had spent 40 years hating Arabs.”

Hersh told the story during a scattershot speech Thursday night at Trinity University, the first in the Maury Maverick Jr. Lecture Series, to illustrate the depth of misunderstanding that most Americans have for Arab culture.

Hersh, called “America’s last muckraker” by writer Jan Jarboe Russell in her introduction, offered “a quick tour” of the Middle East, focusing on Iraq, the Bush administration and the news media.

“Let me just say, we let you down,” Hersh said of the media. “It was our job not to take Bush at face value.”

Hersh began with Bush and kept at him at a frenetic pace.

“This is the most radical president we’ve ever had,” Hersh charged. “We don’t know why he does what he does.”

But Hersh gave it a shot. With Vice President Dick Cheney and others, he said, “It might be oil.”
“With Bush, I really think he thinks democracy is it, that we can impose democracy on the Middle East.”

“This is a country that is so broken,” he said.

Winner of a Pulitzer Prize for exposing the My Lai massacre, Hersh believes Iraq is analogous to the Vietnam War because “we can’t see the enemy.”

“They attack, we respond by shooting around and it’s chaos,” he said.

And he drew parallels between the mindset of American soldiers, like those at Abu Ghraib, and those at My Lai.

“This came from the top,” he said of Abu Ghraib. “Soldiers did not think this up. They do not think up the way to humiliate an Arab man is to make him naked.”

This entry was posted in RagBlog and tagged Iraq, Journalism, Vietnam. Bookmark the permalink.