Dems Who Voted Against Public Option : $19 Million in Healthcare Bucks 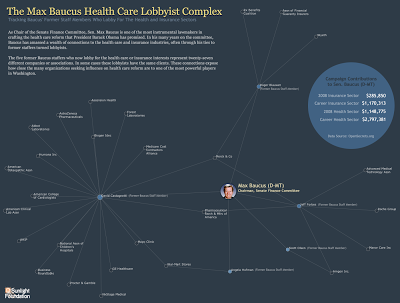 …compared to the profits the insurance industry will make if a public option is defeated… They got a great deal for that 19 million.

Five Democratic members of the Senate Finance Committee who voted on Tuesday to shoot down a proposed public option for the health care reform bill — a measure which polls show is favored by 81% of Democrats — are coming under close scrutiny for their ties to the health care industry.

According to Intershame.com — a site which aims to draw attention to misbehavior — those five senators have collectively been the recipients of over $19 million in donations from health care, pharmaceutical, and health insurance companies over the course of their Congressional careers.

Finance Committee Chairman Max Baucus (D-MT) alone accounts for nearly $8 million of the total. In addition, five of his former staff members — including two former chiefs of staff — are now lobbyists representing organizations with a strong interest in the health care bill.

Joan Walsh of Salon took Baucus to task for his vote, writing, “So let’s get this straight: Baucus admits the public option would ‘hold insurance companies’ feet to the fire,’ but he voted against it? Is there any clearer evidence that Baucus is in the pocket of the health insurance industry?”

Blanche Lincoln (D-AR) comes in second on the Intershame list, with about $4 million in health industry donations, and Kent Conrad (D-ND) is third at around $3 million. Like Baucus, both Lincoln and Conrad have former chiefs of staff who are now health industry lobbyists.

Nate Silver of fivethirtyeight.com did some number-crunching last June which revealed the extent to which health insurance donations can influence Congressional voting. “Lobbying contributions appear to have the largest marginal impact on middle-of-the-road Democrats,” Silver wrote. “Liberal Democrats are likely to hold firm to the public option unless they receive a lot of remuneration from health care PACs. Conservative Democrats may not support the public option in the first place for ideological reasons, although money can certainly push them more firmly against it. But the impact on mainline Democrats appears to be quite large.”

Calls are already appearing at places like the liberal message board Democratic Underground for progressives to sponsor primary challenges to all three senators.

Bill Nelson (D-FL) at $2.5 million and Tom Carper (D-DE) at $1.5 million fill out the Intershame list. Both voted in favor of the weaker Schumer version of a public option, which would not include robust measure to control costs, but against the stronger version proposed by Sen. Jay Rockefeller. Carper has also been a prominent supporter of a “trigger,” which would activate a public option only “if there is no meaningful competition after a couple of years.”

“If money is the reason these five Democrats rejected the public option,” Intershame concludes, “then it only took a little over 19 million dollars over 20 years to buy the five votes the health insurance industry needed to kill any meaningful reform to their industry. 19 million dollars is nothing compared to the profits the insurance industry will make if a public option is defeated. They got a great deal for that 19 million. The American people? Not so much.

2 Responses to Dems Who Voted Against Public Option : $19 Million in Healthcare Bucks