Do No Harm : The Complicity of Psychologists in Cheney-Bush Torture Program 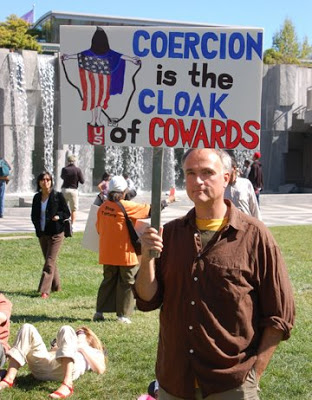 Psychologist protesting APA complicity in torture in 2007.
APA pressured to take a stand…

‘Psychologists have been identified as key figures in the design and conduct of abuses against detainees in US custody’
by Meteor Blades / August 12, 2008

Unlike the people in Stalin’s Soviet Union, no U.S. official risked disappearing into the prison for dissent. Senior State Department and Defense Department official, field commanders, intelligence and FBI officers, and frontline soldiers dissented. They were usually ignored. A few were threatened with administrative sanctions; a few were reassigned; a few requested reassignment. The possibility of dissent makes the silence and complicity of senior and frontline medical personnel in the abuse and neglect of prisoners that much more inexplicable and inexcusable.

Despite Dr. Miles’s book, despite Jane Mayer’s The Dark Side, despite reports such as the Physicians for Human Rights’ Broken Laws, Broken Lives: Medical Evidence of US Torture and its Impact, Americans still don’t have anywhere near a full picture of what happened after the Cheney-Bush administration decided to spit on the Geneva Conventions, redefine and fine-tune torture and treat human beings like the inferior creatures it thought them to be.

What we do know is horrible enough. Most horrible of all is knowing that medical personnel and psychologists violated the most basic ethics of their professions – Do No Harm – by participating in and helping to design “enhanced” interrogations designed to break prisoners. Some did break. Some were killed. This systematic torture focused on sensory and sleep deprivation, overstimulation, and dependency creation. Massive amounts of pain and fear were also included. For their part, psychologists “reverse-engineered” the military’s Survival, Evasion, Resistance, Escape (SERE) program – designed to help American soldiers and marines resist torture – as a means to teach interrogators how to employ torture against captives.

Let me repeat that. Training established to help American prisoners of war cope with, or at least anticipate, their captors’ efforts to break them down was “reverse-engineered” as a means to break down prisoners at Guantánamo and “black sites” run by the CIA or military intelligence operations in Europe, Asia, North Africa and the island of Diego Garcia in the Indian Ocean.

Talk about becoming the enemy.

We also know that, even after the supposed banning of some measures that had been previously approved by the Secretary of Defense, these techniques continued at the detention center at Guantánamo Bay Naval Base, and probably other prisons, even while the Inspector General was putting a seal of approval on the whole affair.

As Josh White wrote in the Washington Post last Friday:

At least 17 detainees held at Guantanamo Bay were subjected to a program that moved them repeatedly from cell to cell to cause sleep deprivation and disorientation as punishment and to soften detainees for subsequent interrogation, according to U.S. military documents.

Defense Department investigations of abuse had previously revealed that the program was used in a limited manner and only on high-value detainees, but the documents indicate that the program was far more widespread and that the technique was still used months after it was banned at the facility in March 2004. Detainees were moved dozens of times in just days and sometimes more than a hundred times over a two-week period.

Military police logs for cell blocks at Guantanamo Bay, Cuba, show that guards used the program — dubbed the “frequent flyer” program in official documents — on numerous detainees and noted the program in their 2003 and 2004 records. The logs, reviewed by The Washington Post, also indicate that the frequent cell movements took place on the same days a Navy admiral was visiting Guantanamo to assess possible detainee abuses.

The Defense Department claims the program stopped in 2004. A spokesperson told White that all prisoners are treated humanely.

“Frequent flyers.” Think about the kind of mentality that not only designs torture methods but turns them into a joke.

Twenty-four-year-old Mohammed Jawad, who will soon go on trial by military tribunal for trying to kill U.S. forces in Afghanistan with a grenade, has sought to have all the charges against him dropped because of abuse he suffered, including that caused by frequent moves.

“…no one actually knows the full scope of the abuses at Guantanamo” and that “all of these allegedly comprehensive investigations were whitewashes.”

“This is only the tip of the iceberg,” Frakt said. “This program was approved at the highest levels. … It suggests that people had simply lost their ability to distinguish right from wrong.”

With all due respect to the major, that puts the best face on it. Because among those engaged in vetting, monitoring and carrying out this program approved at the highest levels were some of the very people we count on to help us distinguish right from wrong. In some cases, they evaluated the status of a prisoner and informed interrogators that he was good for another round or two of “questioning.”

This must stop, wrote psychoanalyst Stephen Soldz in a Sunday Boston Globe Op-Ed, Ending the psychological mind games on detainees:

Psychologists have been identified as key figures in the design and conduct of abuses against detainees in US custody at Guantanamo, the CIA’s secret “black sites,” and in Iraq and Afghanistan. Psychologists should not be taking part in such practices.

Yet a steady stream of revelations from government documents, journalistic reports, and congressional hearings has revealed that psychologists designed the CIA’s “enhanced interrogation” techniques – which included locking prisoners in tiny cages in the fetal position, throwing them against the wall head first, prolonged nakedness, sexual humiliation, and waterboarding.

Jane Mayer … reports that the central idea was the psychological concept of “learned helplessness.” Individuals are denied all control over their world, lose their will and become totally dependent upon their captors.

What angers Soldz and hundreds of other professional psychologists and psychoanalysts is that their organization, the American Psychological Association, has taken an official position that the presence of psychologists makes detainees safer at interrogations. That view, Soldz declares every chance he gets, is ludicrous. In fact, the policy enables the torturers.

At the Chronicle of Higher Education, David Glenn writes that, according to Mayer’s book:

…Martin E.P. Seligman, a professor of psychology at the University of Pennsylvania and a former president of the psychology association, accepted a CIA invitation to lecture at a naval training center about his theories of “learned helplessness.”

Mr. Seligman’s widely respected research suggests that when people and animals are traumatized at random intervals, they tend to give up: They stop seeking to rationally help themselves, and they stop responding to ordinary incentives.

Mr. Seligman insists that his 2002 lecture was intended only to help train U.S. soldiers to resist torture if they are captured. But in his 50-person audience that day were Bruce Jessen and James Elmer Mitchell, psychologists who operate a consulting firm that helped the CIA develop interrogation techniques that some critics have called abusive. According to Ms. Mayer’s book, Mr. Mitchell has long been fascinated by learned-helplessness theory. (Through a lawyer, Mr. Mitchell denied to Ms. Mayer that his CIA interrogation techniques were inspired by Mr. Seligman’s work.)

Few people in the psychology association believe that Mr. Seligman consciously assisted in the development of detainee abuses. But many say that the association needs to make a more thorough public accounting of how the work of Mr. Seligman and other prominent members may have been misused by government agencies.

Soldz, and four other authors addressed the Seligman matter at some length in the July 23 issue of Dissident Voice:

This history, along with the current, well-documented authorizations for detainee abuse, should have provided sufficient warning to APA leaders and to individual psychologists about the moral risks in aiding the national security apparatus, especially under the present U.S. administration. But the APA has not taken the lead in helping psychologists confront these dangerous ethical situations. To the contrary, the APA has been insensitive to the use of psychological techniques in torture and to the role of psychologists in aiding that torture. This insensitivity itself has shocked many psychologists here and abroad.

So, for the second year in a row, the issue of torture and illegal detention will be a hot one at the APA’s annual convention, which begins Thursday in Boston. Soldz will be on hand for a protest. In addition to rejecting the APA’s position on torture and interrogations, the protesters will be backing the candidacy of Dr. Steven Reisner for the presidency of the organization as well as the “Aye” vote on a referendum that would reinforce the first principle of the APA ethics code: “Psychologists strive to benefit those with whom they work and take care to do no harm.”

Reisner, a psychoanalyst, is a senior faculty member and supervisor at the International Trauma Studies Program, an adjunct professor of Psychology and Education at Columbia University, and a consultant to the United Nations on stress and trauma. He is a leader of Psychologists for an Ethical Psychology, and, with Soldz and others, a leading critic of the APA’s position. In April, the mail-in nominating procedure for the APA presidency gave Reisner the most votes (more than 30%) of any of the five candidates who will compete with each other for the post in October,

The mail-in referendum has tough opposition. It states:

Be it resolved that psychologists may not work in settings where persons are held outside of, or in violation of, either International Law (e.g., the UN Convention Against Torture and the Geneva Conventions) or the US Constitution (where appropriate), unless they are working directly for the persons being detained or for an independent third party working to protect human rights.

You can read the entire resolution with all its whereases, pro and con statements and pro and con rebuttals here.

For the past few years, the APA bureaucracy and a good piece of the membership has played a game of on-the-one-hand/on-the-other-hand regarding the role of psychologists and psychoanalysts in the kinds of interrogations brought to us by Donald Rumsfeld and other outlaws in the current administration.

There’s just one problem with the APA’s hemming and hawing approach: Torture is not a nuanced issue.

1 Response to Do No Harm : The Complicity of Psychologists in Cheney-Bush Torture Program