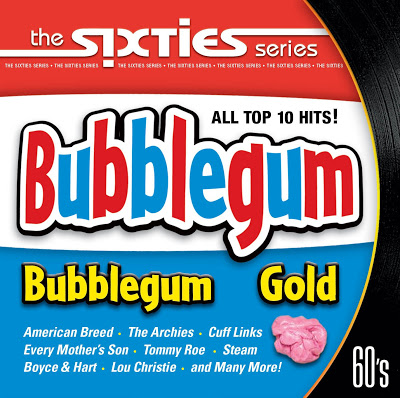 This American Beat series from last year languished under a stack of poorly sorted CDs until my recent excavation. The label’s sense of whimsy and willingness to produce the music pretty much as you got it back then wins my admiration. The Sixties Series divides its music among six genres that distinguished the era, and those distinctions are sometimes muddied in these collections, but it doesn’t hamper the sheer pleasure.

British Invasion Revisited does better by its title, including Merseybeat boys like Gerry & the Pacemakers’ “Ferry Cross the Mersey.” Real gems glitter in this set: The Hollies “Bus Stop” and the Swinging Blue Jeans’ “Hippy Hippy Shake,” but its beauty is reminding us that three minutes or less is the perfect length for a song.

Make Love Not War: 60s Songs of Peace pushes the usual Top 40 offering with 45 versions of Arlo Guthrie’s “Alice’s Restaurant,” the Zombies’ “Time of the Season,” and Tommy James & the Shondells’ “Crimson & Clover.” Not exactly “Give Peace a Chance” territory though the Youngbloods’ “Get Together” and Country Joe & the Fish’s radio-clean “I-Feel-Like-I’m-Fixin’-to-Die” flash the V-sign amiably enough.

Psychedelic Side of Pop is another specific-sounding collection that doesn’t quite deliver on the idea with ho-hum pop like the Lemon Pipers’ “Green Tambourine” and un-psychedelic but still enjoyable numbers like Procul Harum’s “Whiter Shade of Pale” and the Seeds’ “Pushin’ Too Hard.” The song selections are more than enjoyable, with requisite trippy “Itchykoo Park” from the Small Faces and the Byrds’ “Eight Miles High.”

Sixties Harmony gathers a few of the songs that used to make me turn the radio off (notably Texan Gale Garnett’s “We’ll Sing in the Sunshine”), repeats at least one from another volume (the Youngbloods’ “Get Together”), and throws in other delightfully singable tunes like the 5th Dimension’s “Wedding Bell Blues” and the Cyrkle’s “Red Rubber Ball.” “Mercy Mercy Mercy” by the Buckinghams ups it a notch.

Frat House Hits whacks it out of the ballpark with grand-slam dancefloor favorites like the Isley Brothers’ “Twist and Shout,” Mitch Ryder & the Detroit Wheels’ “Little Latin Lupe Lu,” and Wilson Pickett’s “Land of 1000 Dances.” It’s a no-brainer concept but they got it mostly right, especially by using hits of songs by alternate artists, such as offering Joey Dee & the Starlighters’ “Shout” over the more famous Isley Brothers version.

These CDs are also short in play length. Think of them like a time-travel iPod.

This entry was posted in RagBlog and tagged Music, Rock 'n Roll, Sixties. Bookmark the permalink.