Posted on September 2, 2015 by Thorne Dreyer

Jim stood blocking the demolition for more than two hours before the police came, cuffed him, and took him to the county jail. 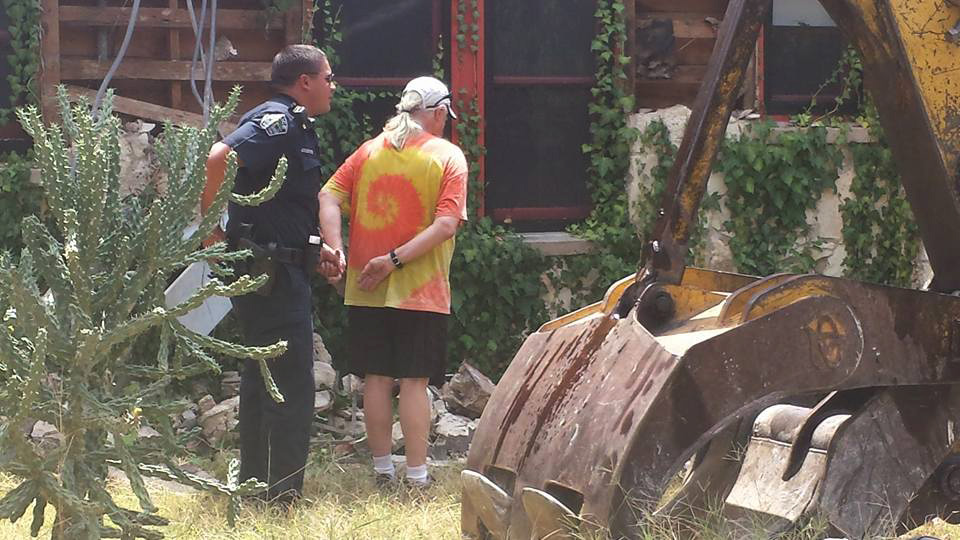 James Retherford is arrested after blocking demolition of house in Bouldin Creek.  Photo by Cynthia Bloom / The Rag Blog.

AUSTIN — The enemy wasn’t quite Megatron (more like “The Claw of Death”), but it was definitely man against massive machine in the Bouldin Creek neighborhood of South Austin when James Retherford faced off against a giant hydraulic excavator in a futile attempt to save a house on Dawson Road he and many of his neighbors believe should have been preserved for its historic value.

Graphic designer and community activist Retherford was taking his neighborhood walkabout on Friday afternoon, August 14, when he came upon the mechanical implement of destruction taking aim at a mid-1920s-era stone house, one of several on the block that were built by local lawyer, engineer, and architect Nicholas Dawson and his two sisters, Mollie and Nannie, who were Austin public education pioneers.

“When are you going to demolish this house?” Jim asked the two workers on site. “Right now,” was the answer.

“I did not believe they had a valid demolition permit,” Jim told The Rag Blog in an interview, “and once they tore it down, there would be no turning back.”

‘There was no time to organize anything, so it had to be a personal act of conscience.’

“There was no time to organize anything,” Jim said, “so it had to be a personal act of conscience. It was Don Quixote or nothing.”

“I walked into the yard and stood in front of the machine. They had already taken one swipe. I raised my hand and they just stopped.”

Jim stood blocking the demolition for more than two hours before the police came, cuffed him, and took him to the county jail where he was booked and charged with Class B misdemeanor criminal trespass. He was released on $100 bail early the next morning.

Cynthia Bloom stood on the street and photographed her husband’s act of witness.

“I talked to the workers and they were sympathetic,” Jim told us. “The black bulldozer operator lives in a house that his great grandfather built in East Austin, and he thought it was a shame he was being asked to tear this house down.”

The new owners of the property, Justin Hubbert and his wife Lauren, arrived on the scene and engaged Retherford in, shall we say, a spirited conversation. Hubbert, who is president of Park Place Finance, an Austin mortgage lender, told Jim he had a legitimate permit to tear down the house. And, as it turned out, he did, thanks, at least partly, to a bureaucratic breakdown at Austin’s Historic Landmark Commission.

The demolition permit had been signed after the commission rescheduled its second meeting in which they were to determine whether the Dawson Road house would be granted historic zoning protection. Two days later the waiting period ran out, and, due to the inaction, the permit was granted.

During their heated exchange, the Hubberts made a significant admission.

During their heated exchange with Retherford, the Hubberts made a significant admission: that they are really just speculating and intend to sell the new house they will build on the lot.

Lauren Hubbert had testified before the commission on June 22, that this would be her “dream home” where she planned to raise their family.

She told the Austin Monitor on July 8, “We’re simply a young couple looking to build our dream home in the neighborhood for our growing family,” she said. “We don’t intend to just build this house and then up and sell it and move away. I’m a native Austinite. … I plan on staying here a long time.”

But they admitted to Retherford during the standoff that they are, to the contrary, simply speculating. “When I pressed the Hubberts about this, both stated that their plan is to ‘build and sell.’”

The property is appraised at over half-a-million and the Hubberts plan to build what their neighbors — and others in Austin experiencing gentrification — refer to as a “McMansion” and what Jim called a “maxed-out fortress,” replete with pool and spa, at an estimated construction cost of $450,000.

By ‘maxed out,’ Jim means it will be built
to the legal limits.

And I doubt that the Hubberts would even bother to argue that the new structure will be a neat fit in the neighborhood. Either clueless or duplicitous — take your pick — Justin Hubbert told the Austin American-Statesman “that he was frustrated that his neighbors were protesting his decision.”

According to the Monitor, Justin and Lauren Hubbert told the commission that they wanted to tear the old house down because it had structural problems, and that electrical, plumbing and HVAC issues had also surfaced since they purchased it. Justin told the American-Statesman that “licensed engineers deemed it unlivable.” 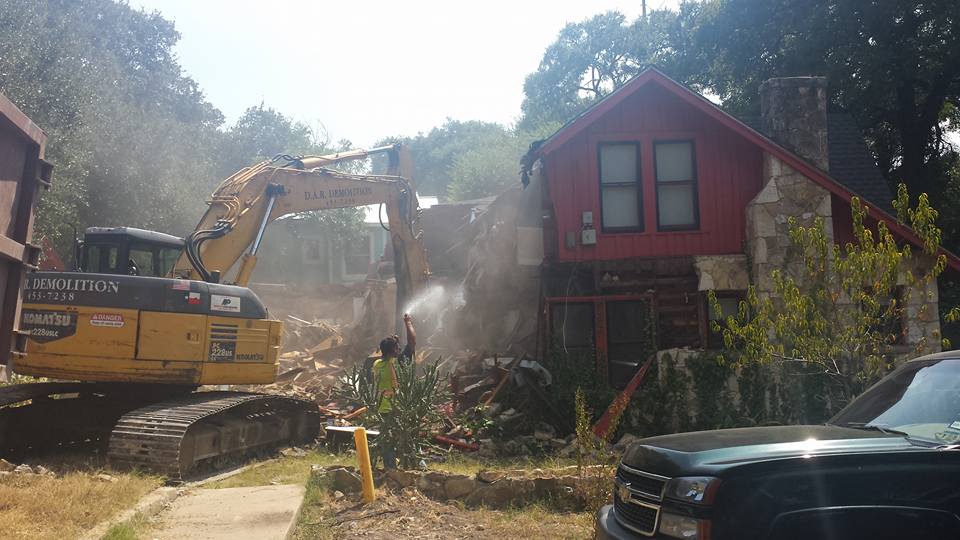 And so it goes. Photo by Cynthia Bloom / The Rag Blog.

Others on the block, including Veronica Allbright and Ellen Richards, who own almost identical Dawson-built houses, were able to refurbish and expand and add modern conveniences while retaining the character of their houses.

In a letter posted at the austintexas.gov website, Richards wrote,

I recently renovated my stone house at 906 Bouldin and preserved the character and appearance by adding onto the back of the home along Ramona Street. From the front you cannot tell that 900 square feet was added to the home. It is an excellent example of what can happen when an individual invests in not only a personal home, but the preservation of the unique character of the neighborhood.

I also believe these houses can continue to share an appreciation [of] the past as well as update for modern convenience. … They give our neighborhood a special quality. The houses are as much to the landscape as the live oaks that have grown around them.

The block had remained essentially intact
since the early 1930s.

The block was especially significant because it had remained essentially intact since the early 1930s. As Richards pointed out, before the demolition, “The home at 901 Dawson is located on a unique block — of the 10 homes on the block, nine are original. Each corner of the block is anchored by a stone house… and is [read: was] likely the only block remaining in the neighborhood with four homes of this type…. all are constructed of Austin stone.”

According to Retherford, the house he tried to save, “and the three other iconic stone houses that anchor the block bounded by Dawson, Ebony, Bouldin, and Ramona, were built out of reclaimed lumber and native Austin stone and rented to Depression-era working families as ‘affordable’ housing. The former tenants include a cab driver, a laborer, a carpenter, a painter, a lawyer, an engineer, and a stock clerk for a state agency.”

Slightly off-point, but cool: Veronica Allbright said that two of the properties “have these strange little two-story garage buildings [and] the only way to access the upper part was by a staircase that was on the outside. When I asked, ‘Why did they go to the trouble of the upstairs when they had to go outside to get up there?’, they said hay was stored there and it could dry out. Dawson Road was dirt. South Austin was separate from the other side of the river and they stored feed and other necessary items for their horses at both these houses.”

Bouldin Creek is, or so Jim Retherford contends, the “weird” of “Keep Austin Weird.”

“It’s a multiracial turn-of-the-century neighborhood that has provided a seamless community for African-American, Hispanic, and white working class families for more than a century. When I moved here in 1977, white people were a minority, and that worked just fine … especially since a large percentage of the white residents were themselves struggling musicians, artists, and other creative types.”

The neighborhood was an “eclectic mix of DIY, Victorian, Craftsman-style bungalows, and unique Austin stone houses, built by siblings Nicholas, Mollie, and Nannie Dawson, beginning in the late 1890s. The house at 901 Dawson Road was one of their finest achievements in creating a Bouldin Creek ‘sense of place.’”

The ‘Claw of Death’ ever looms just
around the corner.

Now, thanks partly to that “sense of place” — and the neighborhood’s proximity to ever-more-pricey downtown Austin — Bouldin property is in great demand and the “Claw of Death” ever looms just around the corner.

“What doomed the iconic house at 901 Dawson was not the city’s system of citizen participation, which didn’t have a chance. The problem was the city’s overriding developer/speculator-driven bureaucracy which for a decade or more has seen significant reduction in workforce and staff resources while facing mounting pressures to process permits under the pressure of inviolable deadlines.”

“The speculators,” he adds, “are moving into the Bouldin Creek neighborhood — as they are in East Austin and wherever inexpensive real estate smells like profits — intent on bulldozing history and community by building big, expensive, poorly constructed Hummer houses for the city’s new wealth.”

As Cindy Bloom put it, “This is a huge slice of Austin and it’s disappearing before our eyes.”

Full disclosure: James Retherford is a contributing editor to The Rag Blog and the designer of our banner and website.

[Rag Blog editor and Rag Radio host Thorne Dreyer is an Austin-based writer, editor, broadcaster, and activist. A pioneering alternative journalist, Dreyer was a founding editor of the original Rag in 1966 Austin and Space City! in Houston, was an editor at Liberation News Service (LNS) in New York, managed KPFT-FM, Houston’s Pacifica radio station, and was a correspondent for the early Texas Monthly magazine.  Dreyer is also a director of the New Journalism Project. Contact him at editor@theragblog.com.]