Posted on September 6, 2015 by Thorne Dreyer 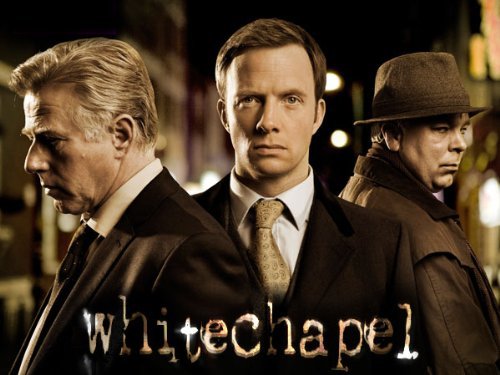 From left: Davis, Penry-Jones and Pemberton

Whitechapel is a British TV drama series in which detectives in London’s Whitechapel district in 2008 deal with murders which replicate historical crimes. The first series depicts the search for a modern copycat killer replicating the murders of Jack the Ripper.

The second series focuses on killing people who knew the Kray twins, freres who terrorized London in the 1960s. The first three series were broadcast in the United States on the BBC America cable network in 2011 and 2012. In late 2013, lead actor Rupert Penry-Jones confirmed that ITV had decided not to re-commission the show.

Historic horror meets modern investigative methods in this atmospheric crime series. When a killer mimics the murders of Jack the Ripper, a team of detectives and a loopy tour guide join forces to bring the copycat to justice.

More than 100 years ago, Jack the Ripper terrorized London’s Whitechapel district. Now, someone is painstakingly re-creating the brutal slayings. Detective Inspector Joseph Chandler leads a team charged with tracking down the modern-day ripper.

Whitechapel was nominated for eight major awards in 2012. At the Crime Thriller Awards it was nominated for “Best TV Drama” and Davis was up for “Best Supporting Actor.” Creators Ben Court and Caroline Ip were nominated for a 2012 Edgar Award for “Best Television Episode Teleplay” and an “Edgar” at the Edgar Allan Poe Awards. Five noms were earned at the Monte Carlo TV Festival: two for Producer Sally Woodward Gentle (later creative Director for Downton Abbey) and Outstanding Actor/Actress nods for Penry-Jones, Davis and Lydia Leonard (who played the original Ripper’s prettiest victim).

Philip Davis has been nominated for 11 major awards, winning five, including three for Vera Drake and one for North Square. In 43 years he has amassed 129 film and TV credits, including Rumpole of the Bailey, Quadrophenia, Inspector Morse, Bleak House, Notes on a Scandal, Midsomer Murders,  and Sherlock. This summer alone I have enjoyed him in Mr. Holmes, Poldark, New Tricks, and Death in Paradise. He also directed Prime Suspect V. LINK

Steve Pemberton has five big nominations as a writer and actor and two British Comedy Award wins for penning Pyschoville. He was one of a quartet of wags who created and performed in the legendary comedy-horror TV series League of Gentlemen. His 48 performing credits include Mr. Bean’s Holiday, The Hitchhiker’s Guide to the Galaxy, The Life and Death of Peter Sellers, Inspector Lewis. and Agatha Christie’s Poirot.

Laura Mackie, Director of Drama at ITV, which produced the series, said: “Whitechapel is a very modern take on the detective genre which combines the Victorian intrigue of the original case with the atmospheric backdrop of a contemporary East End of London. This is not simply about bloodthirstily recreating the Ripper murders, but rather focusing on the three main characters at the heart of the story and the black humor that binds the team together.”

In the first episode of Season 3, someone is torturing and stake-burning old ladies they consider witches, in true 17th Century style. In a later episode three friends are killed in a case which has overtones of a famous 200-year-old crime. Later Buchan identifies a killer’s modus operandi as aping the Marquis De Sade, who murdered women after poisoning them with an aphrodisiac. Then in Season 4, things start to get really weird. Killer cannibals are eating their victims to assume their power. Mmmm, think I’ll get a snack.