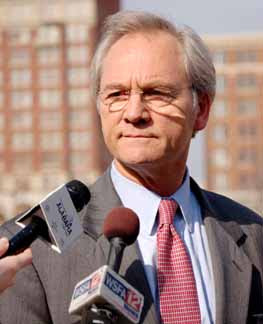 Don Siegelman.
‘By ignoring a Congressional subpoena, Karl Rove has spit in the face of Congress and the American people’
By Don Siegelman / July 31, 2008

But now is not the time to celebrate — now is the time to take action. The House Judiciary Committee is on the record, but now we need the full House of Representatives to vote to hold Karl Rove in contempt as well.

So I’ve launched an online advocacy campaign at www.ContemptForRove.com where people can forward an email to their Members of Congress, urging them to take action — and I’m asking you to join me. I need your help to speak out and urge the full House to do the right thing. Your action is critical. Timing is everything.

Please visit ContemptForRove.com right now to forward an email to your Member of Congress today.

While I served as Governor of Alabama from 1999-2003 and thereafter, Karl Rove and his right-wing political cronies targeted me through a malicious, unfounded, politically-motivated prosecution. I served 9 months in federal prison before the appeals court released me. And now, Karl Rove refuses to testify before Congress about his role in this whole nefarious scheme.

That’s outrageous. By ignoring a Congressional subpoena, Karl Rove has spit in the face of Congress and the American people. As Americans, we deserve to know the truth about how our Department of Justice was used by Karl Rove and his rogue band of political operatives as a political tool to win elections. Only Congress has the power to find the truth.

If Congress lets this politicization of the Department of Justice go unchecked and unpunished, then it could well become part of America’s political culture and happen again in the future. Congress needs to keep digging until they get to the truth. Our democracy and system of justice have to be restored. The American people need to have confidence that this kind of outrageous abuse of power is at least less likely to happen in the future.

That truth-finding starts by having Karl Rove under oath before the Judiciary Committee. We the People must insist that Congress do its job and hold Karl Rove in contempt for failing to obey a subpoena. The house of cards will start to fall soon thereafter.

What would happen to the unemployed steel worker, the housewife, or the taxi cab driver who ignored a subpoena? I give you one guess: They would be behind bars. Karl Rove is not above the law, and Congress needs to make that plain and clear to Karl Rove and to everybody else.

Our democracy will cease to exist as we know it if the government is allowed to use its power to prosecute their political opponents. This fight is not about me but about saving our democracy and restoring justice in America.

That’s why I’m asking you to write Congress today and urge them to act. When Congress holds Rove in contempt, the truth will begin to become exposed. This ball of string will come unraveled. The truth will be known.

I am in this fight not only for my own freedom but also to ensure that Karl Rove is held accountable for his sins.

Together, we can fight to get the full truth from Karl Rove and restore integrity to our system of justice. America deserves nothing less.

Don Siegelman was the Governor of Alabama from 1999 to 2003. Siegelman is the only person in the history of Alabama to be elected to serve in all four of the top statewide elected offices: Secretary of State, Attorney General, Lieutenant Governor and Governor. He served in Alabama politics for 26 years, winning his first election for the governorship with 57% of the vote, including over 90% of the African-American electorate.