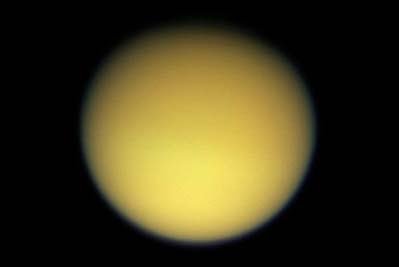 NASA scientists said Wednesday they had found liquid on Saturn’s moon Titan, seen here in a 2005 NASA handout taken from the Cassini probe, only the second body in the solar system after Earth to have fluid on its surface.
Titan has liquid ethane on surface, NASA says
July 31, 2008

PASADENA, California — At least one of many large, lake-like features on Saturn’s moon Titan contains liquid hydrocarbons, making it the only body in the solar system besides Earth known to have liquid on its surface, NASA said Wednesday.

Scientists positively identified the presence of ethane, according to a statement from NASA’s Jet Propulsion Laboratory in Pasadena, which manages the international Cassini spacecraft mission exploring Saturn, its rings and moons.

Cassini has made more than 40 close flybys of Titan, a giant planet-sized satellite of the ringed world.

Scientists had theorized that Titan might have oceans of methane, ethane and other hydrocarbons, but Cassini found hundreds of dark, lake-like features instead, and it wasn’t known at first whether they were liquid or dark, solid material, JPL’s statement said. iReport.com: Share your images of Saturn

“This is the first observation that really pins down that Titan has a surface lake filled with liquid,” Bob Brown, team leader of Cassini’s visual and mapping instrument, said in the statement.

The instrument was used during a December flyby to observe a feature dubbed Ontario Lacus, in the south polar region, that is about 7,800 square miles, slightly larger than North America’s Lake Ontario.

Cassini reached Saturn in mid-2004 and at the end of that year launched a probe named Huygens that parachuted to the surface of Titan the following January.

Thanks to Shane O’Neal / The Rag Blog

This entry was posted in RagBlog and tagged Astronomy, NASA, Science, Space. Bookmark the permalink.