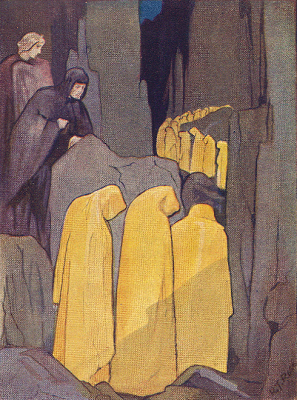 A Strange Procession of Hypocrites. From Mary Macgregor / The Baldwin Project.

Our Divine Comedy
If we cannot influence our elected representatives, all the great efforts of all these dedicated people who desire single payer, universal health coverage will be for naught, and we must accept that the United States is little better than a Third World nation in providing health care to the majority of the population.

In The Divine Comedy Dante places the hypocrites at one of the lowest levels of Hell, dressed in the finest raiment, lined with lead, shuffling along forever and making no progress.

We who have been speaking for single payer, universal health care have been encouraged by what appears to be wide spread popular support for such a program as per HR 676 introduced by Rep. John Conyers and backed by some 90 sponsors, The problem is that the bill has been sitting in committee for some years without debate, nor any sign from the House Leadership that it will get to the floor for debate.

On the other hand there are many organizations pushing for health care reform, the majority of which are joining the fight to pass HR 676. This bill was originally conceived, well researched, and well publicized by Physicians For A National Health Program and endorsed by the 125,000 member American College of Physicians, The California Nurses Association, and many labor and civic groups. Recent polls show 55% Of Americans approve of universal care and 64% indicate a willingness to pay higher taxes to finance it. However, all is not well, for during the 2006 election cycle the health care industry spent $99.7 million on campaign contributions to maintain the status quo and their lobbying costs topped $446 million in 2007.

There was an excellent article by Lindsay Beyerstein in AlterNet, Dec. 24, 2008, indicating that defeating single payer, universal care is a number one priority of the Senate Republicans.. These folks even oppose the Obama plan that would establish a public insurance plan for today’s uninsured, or for others who would opt to join it. The article quotes one Mark Hayes, a Republican health policy advisor, who expresses concern that a government plan might have access to price controls and other tools not available to private insurers. This could lead to lower premiums for the government plan and lead consumers to migrate out of the private market. But the Senate is controlled by Democrats who surely would favor universal health care….

But are we sure that the “progressive party” really has that end in mind.

The Republicans in the Senate can always fall back on the filibuster to prevent passage of a health care bill, and the Democratic leadership can always use that excuse for not providing decent health care. Here, let us follow the money utilizing The Center for Responsive Politics as our source. For the 2008 Campaign Finance Cycle Senator Harry Reed, the Democratic Leader, received $232,910 from the insurance industry, $150,425 from hospitals and nursing homes, $115,350 from pharmaceutical companies, and $326,450 from “health professionals.” The minority leader, Mitch McConell received $648,050 from “health professionals,” $512,433 from insurance companies, $386.040 from the insurance industry, and $265,050 from hospitals or nursing homes. The filibuster rule gives the Democratic majority an out for not passing a bill and blaming it on the Republicans.

The Nation Magazine, Dec. 29, 2008, makes it abundantly clear that the Democratic leadership can circumvent the filibuster by merely changing the Senate rules, which requires ONLY A MAJORITY VOTE, to change the filibuster from 60 votes to 55 votes. The question is, does the Democratic majority want this change, or do they wish to hide behind the current rules? Do the Democratic representatives of the people really want to provide decent health care in the United States or are there over-riding personal considerations?

Turning to The House of Representatives, HR 676 has been languishing in Committee for several years. The Leadership has made no effort to move it along. Let us again look at possible reasons for the indifference. Nancy Pelosi in the 2008 cycle received $117,000 from insurance companies, $81,750 from hospitals and nursing homes, $492,550 from the pharmaceutical industry, and $120,950 from hospitals and nursing homes. Her Democratic Colleague Steny Hoyer, received $153,400 from insurance, $84,500 from hospitals and nursing homes, $130,800 from pharmaceuticals, and $203,100 from “health professionals”. (It’s not germane to the present discussion, but these two representatives received $84,490 and $141,850 from AIPAC and related organizations). The Republican leadership in the House, Reps. Boehner and Blunt, received $206,725 and $93,650 from insurance companies and $159,450 and $87,250 from the pharmaceutical industries. One would trust that Speaker Pelosi would show good faith to the people of the country and get HR 676 to the floor for debate,

Many of the “proponents” of health care change emphasize the importance of computerized medical records, and “preventive care” (health club with personal trainer?). Indeed, these suggestions have merit; however, they are used largely as a distraction. We must provide initially the facilities for caring for the child with pneumonia or his father with a heart attack, or his mother with ovarian cancer. After decent care, as provided in other industrialized nations, is available, then we can consider the niceties.

Yet we who are proposing single payer, universal care must address another issue. That issue is physician availability. Ever since I started practice in 1950 until my retirement in 1990 I was aware that, somewhere behind the scenes, there was a concerted effort not to overpopulate the American scene with “too many doctors.” This explains the great number of foreign doctors, largely excellent folks from India, in American medicine. We have a great lack of general practitioners, largely because of the high tuition costs of medical school. The average student graduates owing $120,000 and his natural decision is to try for a high paying specialty such as orthopedics, or cardiovascular surgery. This nation needs family doctors, internists and internal medicine subspecialists. A suggestion which I made to Dr. Robert Doherty at the American College of Physicians:

There should be (1)government subsidization of medical education at university affiliated medical schools to qualified students, or (2)the establishment of a Medical Academy akin to Annapolis or West Point. In either event the graduate will be required to serve at least five years in areas with physician shortages.

In some ways the general public, who by and large will be the beneficiaries of universal health care, must be involved. It was not Jacque who instigated the social reform in France in 1790, but the middle class and the pamphleteers. I fear that we who talk to one another via the internet are not reaching the average American whose support is absolutely necessary. He/she must be weaned from the TV and somehow immersed in the conversation so that the elected representatives will hear from the people. I am sure if Karl Marx was writing Kapital today he would include TV as a second opiate of the people. In the U.K. during the Thatcher period the Prime Minister turned many of the government run facilities including the railroads and water systems over to private companies; however, the people and the medical community stopped her from privatizing medical care.

Finally, we need from the new administration not only a decent system of health care, avoiding the Massachusetts model in which costs are spiraling out of control using private insurance as the base. We need control of the advertising of prescription drugs on TV. We need cost control of pharmaceuticals, leaving the manufacturers reasonable, but not obscene, profits. We need control of the collusion among the pharmaceutical companies, and the publication of studies regarding new prescription drugs, as well as supervision of subsidies to medical schools by pharmaceutical companies.

If we cannot influence our elected representatives, all the great efforts of all these dedicated people who desire single payer, universal health coverage will be for naught, and we must accept that the United States is little better than a Third World nation in providing health care to the majority of the population. We must accept that health care in our nation is rationed depending on the ability to pay. We must accept that we are victim to the economic philosophies of Ayn Rand and Milton Friedman. We must learn to follow the money and recognize the hypocrisy of politicians who aver that they are against the enactment of health care legislation because “it will put a burden on the taxpayer,” and who recite the falsehood that if we have single payer care that “the government will choose your doctor and hospital.”

Finally a thought from Hannah Arendt: “As witness not of our intentions but of our conduct, we can be true or false, and the hypocrite’s crime is that he bears false witness against himself. What makes it so plausible to assume that hypocrisy is the vice of vices is that integrity can exist under the cover of all other vices except this one. Only crime and the criminal, it is true, confront us with the perplexity of radical evil; but only the hypocrite is really rotten to the core.”

[Dr. Stephen R. Keister is a retired physician who writes about health care issues for The Rag Blog.]