Dubya Bids Adieu : Still Delusional After All These Years 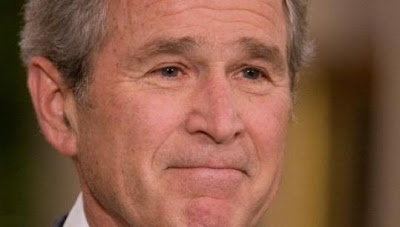 Bush says bye bye. Photo courtesy of Boston Globe.
‘If there was any value in the speech it was this: it should remind us of the importance of refusing to allow this delusional revisionism to stand.’

He made Afghanistan sound like a swell place to take a vacation when, in truth, only those with a death wish venture out these days without an armed convoy.

He lauded Iraq as “a friend of the United States” — without ever mentioning the fact that if Iraq has a BFF it is Iran, not America.

He said his Medicare prescription drug plan “is brining peace of mind to seniors.” Hardly. It’s been widely derided as a poorly conceived, chaotic mess.

He claimed that, on his watch America’s “air, water, and lands are measurably cleaner.” Who is doing the measuring, the same eco-unfriendly companies to which he handed both his environmental policies and our public lands? This is a man whose administration refused to open emails from its own EPA because they contained information about greenhouse gas emissions that are endangering public health.

In a particularly jaw-dropping moment, Bush asserted that when people “live in freedom, they do not willingly choose leaders who pursue campaigns of terror” — a remarkable claim given the fact that Hamas, which has kinda been in the news lately, has leaders who “pursue campaigns of terror” and were willingly chosen by people given the freedom to elect who they wanted.

Another striking moment was watching the great pride the president took in saying that even though we might not have liked all of his decisions, we have to admit that he “was willing to make the tough decisions.” The Crawford Cowboy to the end.

The speech was spin at its most dangerous. It’s easy to feel a pang of pity for a guy who was on top so long and is now heading out the door. But the more sympathy he evokes, the more susceptible we are to the lies he is telling. Before we know it, his revisionism becomes accepted as the truth.

So if there was any value in the speech it was this: it should remind us of the importance of refusing to allow this delusional revisionism to stand.

This entry was posted in RagBlog and tagged Bush Legacy, George W. Bush. Bookmark the permalink.

3 Responses to Dubya Bids Adieu : Still Delusional After All These Years