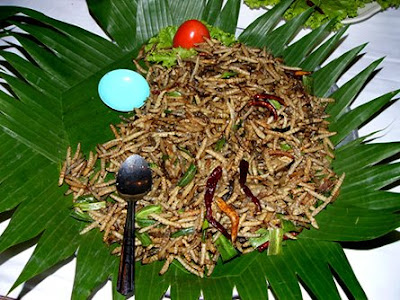 Here’s something good you can do for your body and your planet: Eat more bugs.

Janet Raloff has the goods in this week’s Science News. We’re facing worldwide environmental, obesity, and food crises. Bugs are the answer.

Consider the nutritional value of the humble cricket: Each 100 grams of dehydrated tissue has 1,550 milligrams of iron, 340 milligrams of calcium, and 25 milligrams of zinc — three minerals often lacking in the diets of third-world countries. If you’re ever lost in the woods, three crickets a day will meet your iron needs. Compared to beef or pork, bugs deliver more minerals and healthier fats.

Bugs are also more energy-efficient. Crickets deliver twice as much edible tissue as pigs and almost six times as much as steers based on the same food input. And that’s not counting their superior rate of reproduction. One scholar calculates that overall, they’re 20 times more efficient than steers.

That global food crisis you’ve been reading about? No problem. An Asian expert reports that in Thailand, each family can raise crickets independently on a tiny parcel of land. In a pair of villages, 400 families are cranking out 10 metric tons of crickets during the peak season.

Bug-eating also reduces the need for pesticides. The more bugs you eat, the less you have to spray. That’s what happened in Thailand, where locusts have been brought under control through culinary culling.

You say bugs are gross? Why? Is it the exoskeleton? The appendages? The weird eyes? Guess what: You already eat animals with these characteristics. They’re called crustaceans. Shrimp, crabs, lobsters — they’re arthropods, just like crickets. They’re also scavengers, which means their diets are as filthy as any bug’s.

Many of these arguments have been around for more than a century. Vincent Holt made the original case in his 1885 manifesto, Why Not Eat Insects? Lately, a Web site called food-insects.com has taken up the cause. Three years ago, an Italian professor published Ecological Implications of Minilivestock: Potential Of Insects, Rodents, Frogs And Snails. A company called Sunrise Land Shrimp is bringing the movement to the United States. “Mmm,” says the company’s cricket logo. “That’s good Land Shrimp!”

See what a few good euphemisms can accomplish? “Minilivestock” and “land shrimp” can do for bugs what “mountain oysters” have done for bull testicles. And for those of you who still can’t stand the idea of beetle-munching, there’s even better news. Remember that project I’ve been touting to grow meat without growing animals? Dutch researchers are extending it to insects. Raloff reports:

They’re using biotechnology to produce vats of insect cells — just isolated cells. The researchers described their efforts last year in Biotechnology Advances. The goal, explains Marjoleine C. Verkerk of Wageningen University, is to produce a sanitized source of bug proteins that can be dried and added to breads or perhaps molded into pseudo-burgers. Her team is mass producing isolated ovary cells of silkworms, fall armyworms, cabbage loopers and gypsy moths.

All that good insect protein, without the eyes and legs. What could be better?

This entry was posted in RagBlog and tagged Hunger, Nature, Science. Bookmark the permalink.

2 Responses to Eat Your Bugs, Dear