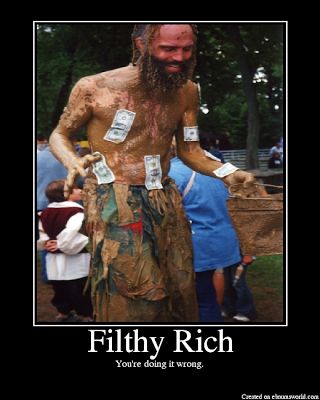 A note of appreciation from the rich
By Author Unknown / September 21, 2008

On the other hand, the chances are pretty good that you’ll slave away at some miserable job the rest of your life. That’s because you were in all likelihood born into the wrong social class. Let’s face it — you’re a member of the working caste. Sorry!

As a result, you don’t have the education, upbringing, connections, manners, appearance, and good taste to ever become one of us. In fact, you’d probably need a book the size of the yellow pages to list all the unfair advantages we have over you. That’s why we’re so relieved to know that you still continue to believe all those silly fairy tales about “justice” and “equal opportunity” in America.

Of course, in a hierarchical social system like ours, there’s never been much room at the top to begin with. Besides, it’s already occupied by us — and we like it up here so much that we intend to keep it that way. But at least there’s usually someone lower in the social hierarchy you can feel superior to and kick in the teeth once in a while. Even a lowly dishwasher can easily find some poor slob further down in the pecking order to sneer and spit at. So be thankful for migrant workers, prostitutes, and homeless street people.

Always remember that if everyone like you were economically secure and socially privileged like us, there would be no one left to fill all those boring, dangerous, low-paid jobs in our economy. And no one to fight our wars for us, or blindly follow orders in our totalitarian corporate institutions. And certainly no one to meekly go to their grave without having lived a full and creative life. So please, keep up the good work!

You also probably don’t have the same greedy, compulsive drive to possess wealth, power, and prestige that we have. And even though you may sincerely want to change the way you live, you’re also afraid of the very change you desire, thus keeping you and others like you in a nervous state of limbo. So you go through life mechanically playing your assigned social role, terrified what others would think should you ever dare to “break out of the mold.”

Naturally, we try to play you off against each other whenever it suits our purposes: high-waged workers against low-waged, unionized against non-unionized, Black against White, male against female, American workers against Japanese against Mexican against…. We continually push your wages down by invoking “foreign competition,” “the law of supply and demand,” “national security,” or “the bloated federal deficit.” We throw you on the unemployed scrap heap if you step out of line or jeopardize our profits. And to give you an occasional break from the monotony of our daily economic blackmail, we allow you to participate in our stage-managed electoral shell games, better known to you ordinary folks as “elections.” Happily, you haven’t a clue as to what’s really happening — instead, you blame “Aliens,” “Tree-hugging Environmentalists,” “Niggers,” “Jews,” Welfare Queens,” and countless others for your troubled situation.

We’re also very pleased that many of you still embrace the “work ethic,” even though most jobs in our economy degrade the environment, undermine your physical and emotional health, and basically suck your one and only life right out of you. We obviously don’t know much about work, but we’re sure glad you do!

Of course, life could be different. Society could be intelligently organized to meet the real needs of the general population. You and others like you could collectively fight to free yourselves from our domination. But you don’t know that. In fact, you can’t even imagine that another way of life is possible. And that’s probably the greatest, most significant achievement of our system — robbing you of your imagination, your creativity, your ability to think and act for yourself.

So we’d truly like to thank you from the bottom of our heartless hearts. Your loyal sacrifice makes possible our corrupt luxury; your work makes our system work. Thanks so much for “knowing your place” — without even knowing it!

This entry was posted in RagBlog and tagged Capitalism, Economy, Poverty, Wealth. Bookmark the permalink.