Even If You Die, They Pretend You Were Straight 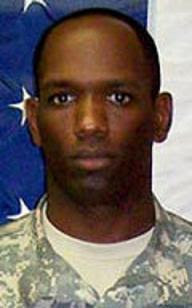 This should present an interesting opportunity for discussion. Maj. Alan Rogers, 40, died in January from wounds from an IED while he was on patrol. He was an intelligence office there to train Iraqi soldiers. The Army posthumously awarded a Purple Heart and a second Bronze Star to Rogers.

He was also gay. How did the media handle it? (Washington Blade):

Mainstream media coverage of Rogers’ death coincided with the grim milestone of 4,000 U.S. service members killed in Iraq and the five-year anniversary of the invasion. But the media reports about Rogers’ death omitted any mention of his sexual orientation. The Washington Post, National Public Radio and the Gainesville Sun, the local newspaper in his hometown of Hampton, Fla., made no mention of his sexual orientation or his involvement with a group that works to overturn “Don’t Ask, Don’t Tell.”

Lynn Medford, Metro editor for the Post, said the newspaper debated whether or not to disclose Rogers’ sexual orientation and ultimately decided not to include such information as a matter of ethics. Rogers to some degree “kept his orientation private” and outing him after his death would “take a decision out of his hands,” she said. Rogers had no partner and no immediate family to consult with to determine what his wishes would be, Medford noted.

Tony Smith, a friend of Rogers’, described him as “very positive” and “very outgoing.” Smith and Rogers worked together in the D.C. chapter of American Veterans for Equal Rights, a group that works to change military policy toward gays. Rogers was out to friends in the Washington area, but “had to obviously be careful [about being out] to too many people because he was active duty military,” Smith said.

Rogers wasn’t exactly closeted, as he went out to public clubs in DC with friends, and even served for a time as treasurer for American Veterans for Equal Rights. Chris Johnson of the Washington Blade contacted several reporters and officials and the replies were interesting.

* Ombudsman for the WaPo, Deborah Howell: editors decided there was no proof Rogers was gay and no evidence Rogers would want to be publicly known as gay after death. Ironically, the WaPo’s official policy on “outing” is that it isn’t done “unless it is germane to the story.” Wait. Isn’t DADT, and the fact that Rogers could have been discharged — something he was actively working to change — relevant to a story about the military?

* I love this one — Donna St. George of the WaPo received an e-mail from an Army casualty officer describing that the deceased’s family was “nervous” about how Rogers’ life was going to be reported — not mention the word “gay” or the phrase “sexual orientation” in the e-mail.

Rogers had no immediate family members to ostensibly be embarrassed by an outing (both of his parents are deceased).

This entry was posted in RagBlog and tagged Gay, Iraq, Military. Bookmark the permalink.