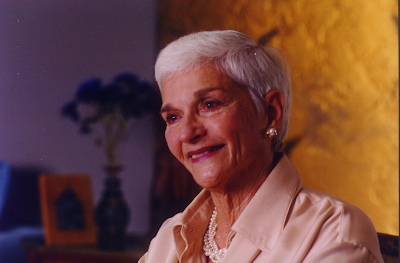 That may be the best way to describe Molly Ivins and Frances “Sissy” Farenthold, two women honored Saturday night at a gala toasting the 70th anniversary of the American Civil Liberties Union of Texas in downtown San Antonio.

“I am humbled because I know there are so many people who are worthy of it, and especially because it is in memory of Molly. To be associated, even in that way, is very moving to me,” Farenthold said.

Farenthold was the first woman to be a serious nominee for vice president at the 1972 Democratic National Convention. Before that, she served with Barbara Jordan as one of two women in the Texas legislature, and was part of the so-called “Dirty 30,” a group of lawmakers who rebelled against corruption in the speaker’s office. She went on to serve as president of Wells College in Aurora, New York and as a human rights observer in Central America.

Farenthold lives in Houston, where she has chaired the board of the Rothko Chapel and lobbies for civil rights and other causes.

“She really is a historic figure, not just for the women’s movement and for ACLU causes,” said Barbara Ann Radnofsky, who presented the award. Radnofsky is the first woman to have won the Democratic nomination for a U.S. Senate seat in Texas in 2006, though she ultimately lost the race.

Farenthold too lost her 1972 bid for vice president, but the fact that she was even nominated will put her in the history books, Radnofsky said.

“It was one of the times where everybody looked around and said, ‘This is huge barrier that has been broken,'” Radnofsky said.

The anniversary gala landed on International Women’s Day, which the ACLU staff considered a happy coincidence.

Earlier on Saturday, about 500 people, mostly women and children, gathered downtown and marched from Travis Park to Milam Park to mark the event. Many carried signs speaking out on issues of the day, including immigration, domestic violence, nuclear power, war and education.

Both the march and the gala paid tribute to Emma Tenayuca, who in 1938 rallied thousands of pecan shellers in San Antonio to protest a wage cut, a movement that led to the founding of the Texas Civil Liberties Union.

Maria Berriozabal, a former San Antonio city councilwoman who is part of the San Antonio Free Speech Coalition, said it was a triumph the march even took place.

Two weeks ago, Berriozabal’s coalition won a court injunction against the city, which wanted to charge organizers for traffic control and cleanup costs. The coalition argued that the steep fees were an impediment to free speech rights. A trial is scheduled for October.

“The city acted wrongly in asking people to pay to demonstrate as we are today, so that’s one great victory we’re celebrating,” Berriozabal said. “Another one is simply women throughout the ages, courageous women who each in their own time who have stood up for themselves, for their families and for their communities especially Emma Tenayuca.”

Terri Burke, director of ACLU of Texas, said San Antonio was the perfect setting for the gala.

“It is fitting that we meet not only in the city of Emma Tenayuca, but in the city of the defenders of the Alamo,” she said. “You’ll want to tell record when….. we drew a line in the sand, resolved to stand up for the individual liberties of all Texans.”

And… Farenthold on Hillary
From Michelle Roberts / AP / March 8
That she’s being honored at the same time a woman is making a strong run for the White House is kismet more than anything else, said ACLU development director James Canup.
“We have such a strong tradition of outstanding women leaders in Texas,” he said.

Farenthold hasn’t supported Hillary Rodham Clinton’s candidacy though — unable to forgive Clinton for voting in favor of the war in Iraq and leery of putting the powerful couple in the White House for a “third term.”

“I never thought that when the first strong woman showed up, I would not support her,” said Farenthold.