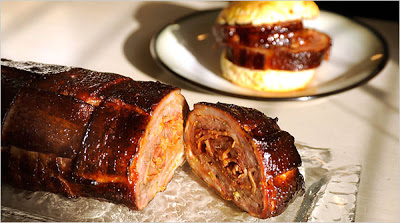 The Bacon Explosion is a rolled concoction that can be baked or cooked in a smoker. Photo: Don Ipock for The New York Times.
Take Bacon. Add Sausage. Blog.
By Damon Darlin / January 27, 2009

FOR a nation seeking unity, a recipe has swept the Internet that seems to unite conservatives and liberals, gun owners and foodies, carnivores and … well, not vegetarians and health fanatics.

Certainly not the vegetarians and health fanatics.

This recipe is the Bacon Explosion, modestly called by its inventors “the BBQ Sausage Recipe of all Recipes.” The instructions for constructing this massive torpedo-shaped amalgamation of two pounds of bacon woven through and around two pounds of sausage and slathered in barbecue sauce first appeared last month on the Web site of a team of Kansas City competition barbecuers. They say a diverse collection of well over 16,000 Web sites have linked to the recipe, celebrating, or sometimes scolding, its excessiveness. A fresh audience could be ready to discover it on Super Bowl Sunday.

Where once homegrown recipes were disseminated in Ann Landers columns or Junior League cookbooks, new media have changed — and greatly accelerated — the path to popularity. Few recipes have cruised down this path as fast or as far as the Bacon Explosion, and this turns out to be no accident. One of its inventors works as an Internet marketer, and had a sophisticated understanding of how the latest tools of promotion could be applied to a four-pound roll of pork.

The Bacon Explosion was born shortly before Christmas in Roeland Park, Kan., in Jason Day’s kitchen. He and Aaron Chronister, who anchor a barbecue team called Burnt Finger BBQ, were discussing a challenge from a bacon lover they received on their Twitter text-messaging service: What could the barbecuers do with bacon?

At the same time, Mr. Chronister wanted to get attention for their Web site, BBQAddicts.com. More traffic would bring in more advertising income, which they needed to fund a hobby that can cost thousands of dollars.

Mr. Day, a systems administrator who has been barbecuing since college, suggested doing something with a pile of sausage. “It’s a variation of what’s called a fattie in the barbecue community,” Mr. Day said. “But we took it to the extreme.”

He bought about $20 worth of bacon and Italian sausage from a local meat market. As it lay on the counter, he thought of weaving strips of raw bacon into a mat. The two spackled the bacon mat with a layer of sausage, covered that with a crunchy layer of cooked bacon, and rolled it up tight.

They then stuck the roll — containing at least 5,000 calories and 500 grams of fat — in the Good-One Open Range backyard smoker that they use for practice. (In competitions, they use a custom-built smoker designed by the third member of the team, Bryant Gish, who was not present at the creation of the Bacon Explosion.)

The two men posted their adventure on their Web site two days before Christmas. On Christmas Day, traffic on the site spiked to more than 27,000 visitors.

Mr. Chronister explained that the Bacon Explosion “got so much traction on the Web because it seems so over the top.” But Mr. Chronister, an Internet marketer from Kansas City, Mo., did what he could to help it along. He first used Twitter to send short text messages about the recipe to his 1,200 Twitter followers, many of them fellow Internet marketers with extensive social networks. He also posted links on social networking sites. “I used a lot of my connections to get it out there and to push it,” he said.

The Bacon Explosion posting has since been viewed about 390,000 times. It first found a following among barbecue fans, but quickly spread to sites run by outdoor enthusiasts, off-roaders and hunters. (Several proposed venison-sausage versions.) It also got mentions on the Web site of Air America, the liberal radio network, and National Review, the conservative magazine. Jonah Goldberg at NationalReview.com wrote, “There must be a reason one reader after another sends me this every couple hours.” Conservatives4palin.com linked, too.

So did regular people. A man from Wooster, Ohio, wrote that friends had served it at a bon voyage party before his 10-day trip to Israel, where he expected bacon to be in short supply. “It wasn’t planned as a send-off for me to Israel, but with all of the pork involved it sure seemed like it,” he wrote.

About 30 people sent in pictures of their Explosions. One sent a video of the log catching fire on a grill.

Mr. Day said that whether it is cooked in an oven or in a smoker, the rendered fat from the bacon keeps the sausage juicy. But in the smoker, he said, the smoke heightens the flavor of the meats.

Nick Pummell, a barbecue hobbyist in Las Vegas, learned of the recipe from Mr. Chronister’s Twittering. He made his first Explosion on Christmas Day, when he and a group of friends also had a more traditional turkey. “This was kind of the dessert part,” he said. “You need to call 911 after you are done. It was awesome.”

Mr. Chronister said the main propellant behind the Bacon Explosion’s spread was a Web service called StumbleUpon, which steers Web users toward content they are likely to find interesting. Readers tell the service about their professional interests or hobbies, and it serves up sites to match them. More than 7 million people worldwide use the service in an attempt to duplicate serendipity, the company says.

Mr. Chronister intended to send the post to StumbleUpon, but one of his readers beat him to it. It appeared on the front page of StumbleUpon for three days, which further increased traffic.

Mr. Chronister also littered his site with icons for Digg, Del.icio.us and other sites in which readers vote on posts or Web pages they like, helping to spread the word. “Alright this is going on Digg,” a commenter wrote minutes after the Explosion was posted. “Already there,” someone else answered.

Some have claimed that the Bacon Explosion is derivative. A writer known as the Headless Blogger posted a similar roll of sausage and bacon in mid-December. Mr. Chronister and Mr. Day do not claim to have invented the concept.

But they do vigorously defend their method. When one commenter dared to suggest that the two hours in the smoker could be slashed to a mere 30 minutes if the roll was first cooked in a microwave oven, Mr. Chronister snapped back. “Microwave??? Seriously? First, the proteins in the meats will bind around 140 degrees, so putting it on the smoker after that is pointless as it won’t absorb any smoke flavor,” he responded on his site. “This requires patience and some attention. It’s not McDonald’s.”

This entry was posted in RagBlog and tagged Humor, Slow Food. Bookmark the permalink.