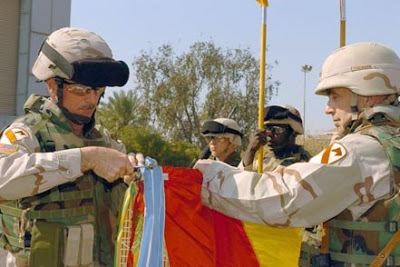 Command Sgt. Maj. Neil L. Ciotola, 1st Cavalry Division command sergeant major, participates in the casing of his division’s colors with Maj. Gen. Peter Chiarelli, 1st Cav. commanding general, during a Transition of Authority ceremony at the parade grounds
in Baghdad.
“We, the Army, have been rode hard and put up wet,”
July 1, 2008

KILLEEN, Texas — A three-decade Army veteran called a “steel spine” by the defense secretary says he and most other soldiers would prefer never to deploy and fight again because they are tired, undermanned and under-equipped.

said Command Sgt. Maj. Neil L. Ciotola, Fort Hood’s senior noncommissioned officer. “We’re catching ourselves coming and going. … In all honesty, ladies and gentlemen, I and the majority of us in uniform, and those that repeatedly support us are tired.”

Ciotola spoke at the Central Texas-Fort Hood Chapter of the Association of the United States Army where he was given an award for leadership Monday night.

Ciotola, who led III Corps in Iraq from late 2006 to early this year with Lt. Gen. Raymond T. Odierno, was called Multinational Corps’ “steel spine” during its 14 months in Iraq by Defense Secretary Robert Gates in February.

Ciotola said tens of thousands in uniform feel like he does about never wanting to deploy and fight again. Too many have “seen too much of death, sacrifice that cannot be measured on any scale, evil that cannot be comprehended by those who have not looked it in the eye.”

“Yet I willingly embrace the reality we still have confronting us; this is a long war, an era of persistent conflict and much is expected of us, both in and out of uniform,” Ciotola said, the Killeen Daily Herald reported in Tuesday editions.

Officials are well aware of the Army’s shortfalls: the lack of equipment, troops and recovery time before the next deployment, he said.

But America at large has failed to realize that the Army is resolute and not willing to throw in the towel, he said.

“Yet there is reason to allow one’s chest to swell with pride, reason to revel in all that we’re confronted with,” Ciotola said. “Yup — we’re tired; we’re undermanned, under-equipped … but again, we are resolute.”

Ciotola said families and community leaders also shoulder the burden of the war. They “sustain us, comfort us, encourage us,” he said.

Thanks to Greg Olds / The Rag Blog