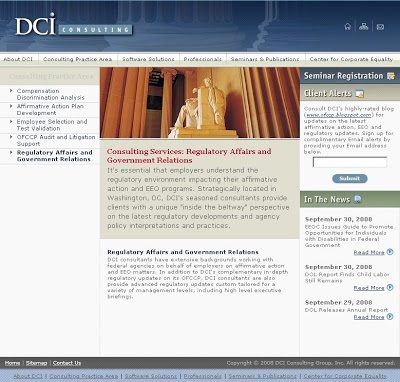 WASHINGTON — Freddie Mac secretly paid a Republican consulting firm $2 million to kill legislation that would have regulated and trimmed the mortgage finance giant and its sister company, Fannie Mae, three years before the government took control to prevent their collapse.

In the cross hairs of the campaign carried out by DCI of Washington were Republican senators and a regulatory overhaul bill sponsored by Sen. Chuck Hagel, R-Neb. DCI’s chief executive is Doug Goodyear, whom John McCain’s campaign later hired to manage the GOP convention in September.

Freddie Mac’s payments to DCI began shortly after the Senate Banking, Housing and Urban Affairs Committee sent Hagel’s bill to the then GOP-run Senate on July 28, 2005. All GOP members of the committee supported it; all Democrats opposed it.

In the midst of DCI’s yearlong effort, Hagel and 25 other Republican senators pleaded unsuccessfully with Senate Majority Leader Bill Frist, R-Tenn., to allow a vote.

“If effective regulatory reform legislation … is not enacted this year, American taxpayers will continue to be exposed to the enormous risk that Fannie Mae and Freddie Mac pose to the housing market, the overall financial system and the economy as a whole,” the senators wrote in a letter that proved prescient.

Unknown to the senators, DCI was undermining support for the bill in a campaign targeting 17 Republican senators in 13 states, according to documents obtained by The Associated Press. The states and the senators targeted changed over time, but always stayed on the Republican side.

In the end, there was not enough Republican support for Hagel’s bill to warrant bringing it up for a vote because Democrats also opposed it and the votes of some would be needed for passage. The measure died at the end of the 109th Congress.

McCain, R-Ariz., was not a target of the DCI campaign. He signed Hagel’s letter and three weeks later signed on as a co-sponsor of the bill.

By the time McCain did so, however, DCI’s effort had gone on for nine months and was on its way toward killing the bill.

In recent days, McCain has said Freddie Mac and Fannie Mae were “one of the real catalysts, really the match that lit this fire” of the global credit crisis. McCain has accused Democratic presidential candidate Barack Obama of taking advice from former executives of Fannie Mae and Freddie Mac, and failing to see that the companies were heading for a meltdown.

Obama has received $120,349 in political donations from employees of Freddie Mac and Fannie Mae; McCain $21,550.

The Republican senators targeted by DCI began hearing from prominent constituents and financial contributors, all urging the defeat of Hagel’s bill because it might harm the housing boom. The effort generated newspaper articles and radio and TV appearances by participants who spoke out against the measure.

Inside Freddie Mac headquarters in 2005, the few dozen people who knew what DCI was doing referred to the initiative as “the stealth lobbying campaign,” according to three people familiar with the drive.

They spoke only on condition of anonymity, saying they fear retaliation if their names were disclosed.

“Hollis’s goal was not to have any Freddie Mac fingerprints on this project and DCI became the hidden hand behind the effort,” one of the three people told the AP.

Before 2004, Fannie Mae and Freddie Mac were Democratic strongholds. After 2004, Republicans ran their political operations. McLoughlin, who joined Freddie Mac in 2004 as chief of staff, has given $32,250 to Republican candidates over the years, including $2,800 to McCain, and has given none to Democrats, according to the Center for Responsive Politics, a nonpartisan group that tracks money in politics.

On Friday night, Hagel’s chief of staff, Mike Buttry, said Hagel’s legislation “was the last best chance to bring greater oversight and tighter regulation to Freddie and Fannie, and they used every means they could to defeat Sen. Hagel’s legislation every step of the way.”

“It is outrageous that a congressionally chartered government-sponsored enterprise would lobby against a member of Congress’s bill that would strengthen the regulation and oversight of that institution,” Buttry said in a statement. “America has paid an extremely high price for the reckless, and possibly criminal, actions of the leadership at Freddie and Fannie.”

McConnell’s office said members of leadership do not sign letters to the leader. McConnell was majority whip at the time.

Eight of the targeted senators did sign it: Sens. Rick Santorum of Pennsylvania, Mike Crapo of Idaho, Jim Bunning of Kentucky, Larry Craig of Idaho, John Ensign of Nevada, Lindsey Graham of South Carolina, George Voinovich of Ohio and David Vitter of Louisiana. Santorum, Crapo and Bunning were on the Senate Banking, Housing and Urban Affairs Committee and had voted in favor of sending the bill to the full Senate.

On Thursday, Freddie Mac acknowledged that the company “did retain DCI to provide public affairs support at the state and local level.” On Friday, DCI issued a four-sentence statement saying it complied with all applicable federal and state laws and regulations in representing Freddie Mac. Neither Freddie Mac nor DCI would say how much Goodyear’s consulting firm was paid.

Last month, the concerns of the 26 Republican senators who signed Hagel’s bill became a reality when the government seized control of Freddie Mac and Fannie Mae amid their near financial collapse. Federal prosecutors are investigating accounting, disclosure and corporate governance issues at both companies, which own or guarantee more than $5 trillion in mortgages, roughly equivalent to half of the national debt.

Freddie Mac was so pleased with DCI’s work that it retained the firm for other jobs, finally cutting DCI loose last month after the government takeover, according to the three people familiar with the situation.

Democrats did not like the harshest provision, which would have given a new regulator a mandate to shrink Freddie Mac and Fannie Mae by forcing them to sell off part of their portfolios. That approach, the Democrats feared, would cut into the ability of low- and moderate-income families to buy houses.

The political backdrop to the debate “was like bizarre-o-world,” said the second of three people familiar with the program. “The Republicans were pro-regulation and the Democrats were against it; it was upside down.”

Sen. Richard Shelby, the committee chairman at the time, underscored that in a statement Wednesday, saying that with Democrats already on their side, it was not surprising that Freddie Mac and Freddie Mae went after Republicans. “Unfortunately,” said Shelby, R-Ala., “efforts then to derail reform were successful.”

In a sign of bad things to come, Freddie Mac was already having serious problems in 2005. Auditors had exposed massive accounting issues, so improved regulation was one obvious remedy.

DCI never filed lobbying reports with Congress about what it was doing because the firm was relying on a long-recognized gap in the disclosure law.

Federal lobbying law only requires reporting and registration when there are contacts with a legislator or staff.

“To have it stealthy, not to let people know who is behind this, in my opinion is unethical,” said James Thurber, director of the Center for Congressional and Presidential Studies at American University who long has taught courses about lobbying.

Goodyear is a longtime political consultant from Arizona who resigned from the Republican convention job this year after Newsweek magazine revealed he had lobbied for the repressive military junta of Myanmar.

McLoughlin, Freddie Mac’s senior vice president for external relations, was assistant treasury secretary from 1989 through 1992 in the administration of President Bush’s father. McLoughlin served as chief of staff to Sen. Nicholas Brady, R-N.J., in 1982 and to Rep. Millicent Fenwick, R-N.J., from 1975-79.

Seven of the 17 targeted Republican senators were in the midst of re-election campaigns in 2006, and according to one of the three people familiar with the program, Freddie Mac and DCI hoped those facing tough races would tell their Republican colleagues back in Washington that “we’ve got enough trouble; you’re making it worse with Hagel’s bill.”

Five of the seven DCI targets who ran for re-election in 2006 lost, and Senate control switched to the Democrats.

A Freddie Mac e-mail on May 4, 2006 _ the day before Hagel’s letter _ details the behind-the-scenes effort that Freddie Mac and DCI generated to hold down the number of Republicans signing Hagel’s letter urging a full Senate vote. It said:

“What I’m asking is that DCI get a few of their key well-connected constituents from each state to call in to the DC office of their Republican senators and speak to the (legislative director) or (chief of staff) and urge them not to sign the letter. The following could be used as a short script.”

The proposed script read: “We can all agree that Fannie’s and Freddie’s regulator should be strengthened but unfortunately, S.190 goes too far and could potentially have damaging effects on Georgia’s _ example _ home buyers.”

According to the third of the three people familiar with the program, “DCI was asked to help keep senators from signing; it was a big part of their effort that year and it was viewed as a success since many DCI targets did not sign the letter.”

DCI’s progress after the first four months of the campaign was spelled out in a 19-page document dated Dec. 12, 2005, and titled, “Freddie Mac Field Program State by State Summary Report.”

A snippet of a senator-by-senator breakdown of the efforts says this about Maine’s Snowe:

“Philip Harriman, former state senator, co-chair of Snowe’s 2006 campaign, personal Snowe friend, major GOP donor and investment adviser, has written the senator a personal letter on this issue. Dick Morin, vice president Maine Association of Mortgage Brokers, has been in direct contact with Sen. Snowe’s committee staff, has sent a letter to Snowe, and is pursuing a dozen(s) of letters from his members.”

On Wednesday, Snowe’s office issued a statement saying that she “literally gets hundreds of ‘Dear Colleague’ letters seeking support for their positions that she does not sign. Had this legislation come up for a vote in 2006, she certainly would have considered it on its merits _ as she does every vote. Just last July, she voted for the housing bill that established a new, stronger regulator.”

Rosario Marin, a staunch McCain supporter who spoke at the GOP convention in September, was among the people DCI used in carrying out the campaign.

Marin, the U.S. treasurer during the first term of the Bush administration, went to Missouri and to Montana, Burns’ state, where she spoke out against Hagel’s bill.

At the time, Burns, who ended up losing his re-election bid, was caught up in a Washington influence peddling scandal centering on disgraced lobbyist Jack Abramoff.

Marin’s visit triggered a local newspaper story in which the reporter contacted Burns’ staff for comment. Burns’ office told the newspaper the senator was not supportive of the latest version of Hagel’s bill.

On Wednesday, Marin, now state consumer services secretary in California, issued a statement confirming that her trips to Missouri and Montana were in her capacity as a DCI consultant.

“On day one” of the effort, Sen. George Allen of Virginia had not addressed Hagel’s bill and his legislative aide for housing was not assigned to it, the report said.

“Today,” the report added, “the senator is aware of the issue and … at the moment he is undecided.” Allen’s deputy chief of staff “has said that the senator will take into consideration before he decides that Freddie Mac is located in Virginia and is one of the largest Virginia employers.”

“Grasstops/opinion leaders James Todd, president, the Peterson Companies wrote to both senators,” the report added. “Milt Peterson, the founder and CEO of the company is one of Allen’s major donors.”

In the end, Allen, who lost his bid for re-election in 2006, did not sign Hagel’s letter.