G8 : Determined to Kill Off the World’s Poor 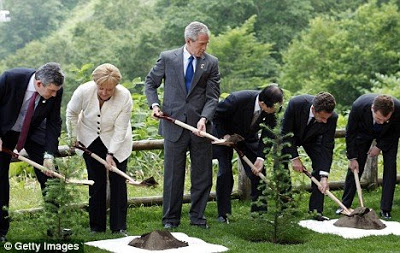 The G8: Humanitarian Failure and Making the World Safe for Corporate Power
by Robert Weissman / July 10, 2008

It’s hard to dismiss the temptation to write off the G8 meetings as a meaningless talkfest.

On the other hand, when the political leaders of the most powerful countries get together and issue joint statements, it may be worth looking at what these planetary stewards have in mind. This is particularly true at a time when new global crises — skyrocketing oil prices, the spike in food prices, the impact of the U.S. recession and accelerating global warming — are added to ongoing public health disasters and persistent global poverty.

Is it too much to expect the G8 leaders (the political leaders of the United States, Japan, Canada, Britain, France, Germany, Italy and Russia) to offer something meaningful in response to these problems?

With the G8 meeting in Hokkaido, Japan just concluded, the answer apparently is, yes.

G8 failures seem to fall into two categories: first, promise to do too little, and then renege on commitments made; second, promote harmful policies and projects.

In the first category comes the G8’s statement on global public health. Following aggressive lobbying by public health groups, the G8 agreed to reiterate its commitment to provide universal treatment for HIV/AIDS. But the rich countries have not agreed to put the money on the table to achieve this objective. “The AIDS crisis in Africa is an emergency, and reaching universal access by 2010 will require a quadrupling of spending over current levels,” explains Masaki Inaba of the Africa Japan Forum. “A restating of existing commitments is not a sufficient response by the G8.”

The dominant public health need in the world’s poorest countries is to restore the public health systems decimated by decades of International Monetary Fund and World Bank “structural adjustment” programs. The G8 leaders said only that they aim to “work toward” poor countries achieving the World Health Organization (WHO) target of 2.3 professional health workers per 1,000 people. (By contrast, according to WHO data, the United States has about 31 health workers per 1,000 people, and 56 per 1,000 if you include the category of “health management and support workers.”)

Also in the first category is the pathetic G8 statement on climate change. Dragged down most of all by the anti-leadership of the United States, the G8 announced a commitment to a 50 percent reduction in carbon emissions by 2050. Well, a sort-of commitment.

The best science says the world needs at least an 80 percent reduction from 1990 emissions levels by 2050, and very likely more, so the G8 commitment is totally inadequate on its face.

But the G8 position is even more lame than it first appears. A statement from an environmental coalition including Friends of the Earth International explained the key flaws. “First, the G8 formula is a global cut,” not imposing particular responsibility on the rich, high carbon-polluting countries. Second, “the cut has no clear baseline. It was revealing that in announcing it, Japanese Prime Minister Yasuo Fukuda initially said it was from 1990 levels, then had to take back that statement and subsequently mentioned a 2000 baseline.” Third, the statement is not binding, and “indeed, the G8 announcement reinforces the G8 as a site for climate action that rivals the UN process [for climate change negotiations] and effectively subverts it.”

In the second category of doing direct harm come many of the G8 recommendations in the declarations on the global economy and on food security.

The G8 leaders call for opening and deregulating financial markets, even as it is clear that financial deregulation has helped create the current global financial crisis.

The G8 leaders call for stronger patent, copyright and trademark monopolies. Remarkably, in a document purporting to address the key issues in the global economy, they make space to encourage rapid negotiation and completion of an Anti-Counterfeiting Trade Agreement, a deal that may hinder or criminalize peer-to-peer file sharing, require Internet Service Providers to limit consumers’ web access, and interfere with parallel trade in goods (like Canadian drugs brought into the United States), among other problems.

The G8 leaders call for completion of the Doha Round negotiations at the World Trade Organization, aiming to further deepen reliance on a global food trading system that has driven the poorest people off their land and undermined developing countries’ ability to feed themselves.

The G8 leaders also call for more aid for food-importing, poor countries — to be delivered through IMF lending facilities that typically require countries to adopt more of the market fundamentalist mandates that have driven people off the land and undermined governments’ capacity to assist the poor and pursue expansionary economic policies.

[Robert Weissman is editor of the Washington, D.C.-based Multinational Monitor, and director of Essential Action.]

This entry was posted in RagBlog and tagged Capitalism, Global Economy. Bookmark the permalink.