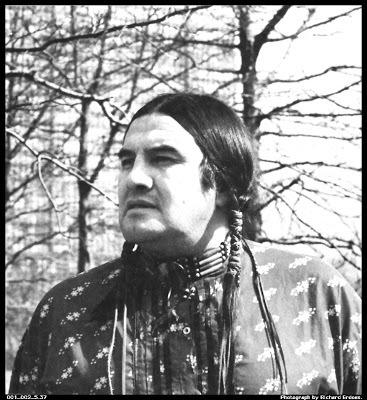 Clyde Bellecourt, one of three founders of the American Indian Movement (AIM) in 1968.
‘We had to create our own institutions. Even today, we can do that all across America.’
By Brenda Norrell / August 13, 2008

SAN FRANCISCO — Clyde Bellecourt spoke of the birth of the American Indian Movement forty years ago, remembering his mother’s own legacy and also the time of the end for the priests who were controlling the Sundance, during the 40th Anniversary, “AIM For Freedom,” Photo Exhibit.

During the culminating night of the exhibit at SomArts, July 30, Bellecourt shared his own journey and the birth of the American Indian Movement. He said his spirit name is Nee-gon-we-way-we-dun, “Thunder Before the Storm.”

Born May 8, 1936, to Anishinabe parents, it was his parents legacy that shaped his course. In boarding school, Bellecourt’s mother was punished severely for speaking her own language. Every time she was caught speaking her Native language, she had to scrub the floors with a toothbrush.

As a boy, Bellecourt noticed that whenever it rained, his mother’s knees would swell. “I remember asking her, ‘Mom what’s wrong with your knees?’” It wasn’t until long after the American Indian Movement formed that she told her son the true story. But even then, the young Clyde could hear her speaking her Anishinabe language late into the night with other women and having a wonderful time.

When he asked to learn the language, his mother would tell him to go to school and study hard. She said he might be a doctor someday. Bellecourt’s father also suffered and ultimately, like so many other young Native men, enlisted in the military because he wanted to get out of the “brutal education system,” the white European education conspiracy between the federal government and the churches, Bellecourt said.

After surviving World War I in Germany by piling dead bodies over him, Bellecourt’s father went on to be the father of seven girls and five boys. Still, when there was lightning and thunder, his father lived with the trauma of the war and would duck for cover.

When the American Indian Movement was formed on July 28, 1968, in Minneapolis, Bellecourt said, “My mother was scared to death.” Then, she began to see the change. She saw children going to powwows, Indians receiving legal services and the many programs started for culture and social services.

Remembering his mother, Bellecourt said she never gave up her language. It was the last sounds he heard when she was getting ready to pass to the Spirit World. “The last thing she did was she started singing Indian.” His mother was singing about the pristine lakes of White Earth.

“She never gave up.”

For Bellecourt, it was hard for him to control his anger. He said he would lock himself in his room. But, remembering her life story, he said, “It justified all the bad things that were happening to Indian people. I knew we had to continue.”

Bellecourt said Indian people are victims of the conspiracy between the federal government and the Christian churches, the conspiracy to strip the people of their lands, language and culture. Those same termination policies, however, meant to destroy the people, led the people to come together.

The American Indian Movement was created to create change for Indian people. On July 28, 1968, about 120 mostly women and children, came together. They called themselves the Concerned American Indian Coalition.

Bellecourt said he had spent much time in juvenile institutions and jails, but went on to work as an engineer. On that night when the movement was formed, he said, “I got up and spoke about the terrible conditions for American Indian people.”

At that time, there was nothing taught in the parochial schools about Indian people. There was nothing taught about the amount of food and medicine contributed by Indian people or how in South America, Indian people performed brain surgery while Europeans were still living in caves. There was no study of the advanced Indian aqueducts or the great pyramids, or of how Benjamin Franklin stayed with the Iroquois and took the knowledge of the Iroquois Confederacy to create the United States own confederacy.

“There was absolutely nothing to make our children feel good.”

Bellecourt said Indian people were living in dire poverty. But even now, he said, 90 percent of our people are unemployed, “even with a casino sitting in our backyard today.”

“Today they are digging us up all over the western hemisphere. They have never found a prison, or a guillotine. It must have been a great civilization. They found out that Indian people had no trace of alcohol.”

During the early years, as the Indian suicide rate increased to seven times the national average, Bellecourt began to search for answers in books, such as the hard-to-find, “Our Brothers Keeper,” on the US and Indian relationships. He said it was no longer the time to send people to a church or the BIA to get a handout, someone had to stand up for the treaty rights and against the police brutality.

“We chose to make that change by standing on our treaty rights.”

The American Indian Movement made its stand on treaty rights. Now, he said, Indian people are jeopardizing those very treaty rights, as they make agreements for casinos that include giving up hunting and fishing rights.

“Now, Indian people are making compacts with the states, giving up treaty rights, for casinos.”

“We don’t have to worry about the government anymore, we are terminating ourselves.”

At that first meeting of the American Indian Movement 40 years ago, Bellecourt said he must have scared some people, as they took off out the door. He announced his solution and called it: “Confrontation politics.”

Bellecourt also pointed out that the United States didn’t give American Indians anything because the land and everything else had been theirs before Europeans arrived. “They didn’t give us nothing. Everything that white America got, they got from us.”

The Black Hills meant nothing to the government. The land for Ceremonies and Ghost Dances, was to be Indian peoples “as long as the rivers flow, the grass grows and the sun shines.” Then gold and uranium were discovered and they came for the lumber and rich farm land. The government began to seize the land for gold. “All the gold in Fort Knox comes from Indian land.”

During its four decades of accomplishments, the American Indian Movement operated a successful job training program for thousands of American Indians. “We got them off welfare rolls and put them on payrolls.”

But the main issue for AIM was to stop the United States from seizing Indian children, stealing children and separating families, never to see one another again. AIM helped create the Indian Child Welfare Act. AIM also created survival schools, where Indian children learned hunting, fishing, maple syrup gathering and wild rice harvesting, along with their studies. Among those was the Heart of the Earth Survival School. Meanwhile, AIM challenged the churches, forcing leaders to admit their violations of the sacred words.

Bellecourt said, “AIM is not just Wounded Knee.” He said it is not just protesting outside sports stadiums against mascots, although that is part of AIM.

“We had to create our own institutions. Even today, we can do that all across America.”

“It is not a walk or run across America. When the prayers are over, it is time to roll up the sleeves and get to work.

“The Creator is not going to help you unless you help yourself.”

At the time, 40 years ago, Bellecourt said those who came together didn’t know they were fulfilling a prophecy. The prophecy said that five generations after the Massacre of Wounded Knee, that the drums would be heard again and the fires would be lit again.

Bellecourt recalled that first powwow held in a basement 40 years ago, with young boys coming with bells tied around their Levis. Still, women came dressed in the sacred jingle dress. Today, the powwows are huge and the ceremonies have been brought back.

Bellecourt also remembered when he was young, fishing with his father, catching large amounts of fish for the elderly and handicapped. Every day was thanksgiving and that is the way it is for Indian people.

“The American Indian Movement said: ‘We will never give up another inch of our land and we will fight for everything we have lost.’”

Speaking to the gathering at SomArts in San Francisco, Bellecourt said for those who want to become part of AIM, there are no fees or entrance requirements. “You just have to be who you are, fight and struggle, defend the treaty rights,” and defend the women and those who are suffering. Declaring everyone present a member of AIM, he said, “We are still at war, we are going to unite, and we are going to work together to fight injustice.”

Bellecourt said when he was in jail, he read “Black Elk Speaks,” and the history of Ojibwe Nation. He began to dream of the Sundances and could see the horses, the horses of many colors.

When he did get out of jail, he went to the only Sundance there was, at Pine Ridge and saw Dennis Banks and Russell Means. Bellecourt said around the Sundance arbor, there was a Ferris wheel and merry-go-round. Everyone was eating snow cones and burgers.

Bellecourt said he knew something had to be done. Then, he was told that the Priest was coming to offer communion on the final day of the Sundance. He knew it had to stop.

The Lakotas told Bellecourt that he had better talk to Frank Fools Crow, Lakota spiritual leader, before taking any action and he did. At that time, the government gave the church control over the Sundance. The Sundance and peyote use was sponsored and controlled by the church.

Bellecourt was told, “If you try to do something, they will put you in jail. You had better go talk to the warriors, the Sundancers.” The Sundance was in a state of degradation because of the church control. But, now the warriors did not want it to continue.

At noon the priest came carrying a white leather bundle, with a pipe in it. The priest came to the Sundance arbor with altar boys. When Bellecourt went out into the arbor, the people screamed for him to go home to Minnesota. They told him he wasn’t from there. They threw things at him. Still, Bellecourt asked the priest to please leave and told him that the warriors did not want him there anymore.

As the priest was escorted out of the Sundance arbor, on one side was Bellecourt. On the other side, another warrior had stepped forward. It was Lee Brightman, Sioux/Creek.